Kristian Fosh aims to continue the current point â€˜nâ€™ click adventure revival with Jason The Greek: The Ladies of Lemnos, a colourful and light-hearted caper inspired by Monkey Island, Discworld and other adventure games of yore.

Thereâ€™s also an influence behind it that you may not expect – Star Trek.

Kristian is no stranger to the world of development, having worked on renowned MMORPG RuneScape in addition to a handful of smaller titles including Arcanists and Zombie Dawn.

Sound engineer Chris Jolley is also lending a hand to make Jason The Greek a reality, with a back catalogue comprising of Harry Potter and the Deathly Hallows, Silent Hill: Shattered Memories and more.

The plot sees Jason – the charismatic captain of the Argo – and his crew become stranded on the Isle of Lemnos while searching for the Golden Fleece. Also known as â€˜The Land of Womenâ€™, Jason soon finds himself in quite the predicament with the locals.

With the clock currently ticking on Kickstarter, Kristian has been kind enough to share some words on his hopes and aims for Jason the Greek, and just how Star Trek fits into a something seeped in ancient Greek mythology. 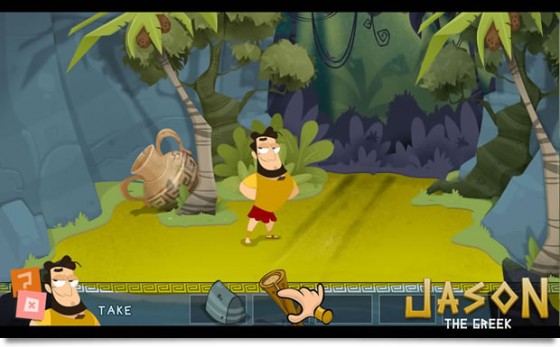 Where did the desire to create Jason The Greek come from?

The game first came from the desire to want to make the kind of title I really enjoy – a point and click adventure. I had worked on a few collaborations and when these faded out due to one reason or another I guess I really just wanted to do something for myself, something I really loved to do.

Story wise, Iâ€™ve always wanted to do a sci-fi spoof, itâ€™s something Iâ€™ve had in the back of my head for a long time but I wanted to do a more original take on the whole genre instead of just another Kirk-clone and so mixed it with another great geek passion of mine that is the Greek Myths and legends, personal favourite being Jason and The Argonauts. From there everything else just fell into place.

The lead character has been described as mixture of Captain Kirk and the captain of the Argonauts. Care to elaborate?

Haha â€“ yep, with a dash of Zapp Brannigan thrown in for good measure. Essentially his character design, his clothes, armour, dress sense etc are all inspired by the Ancient Greeks but the personality is much more Kirk-esque with many a manly monologue and offset pause in conversation.

I imagine both captains were irresistible to women, thoughâ€¦

Weâ€™re informed that the Star Trek homage doesnâ€™t end with Jason himself due to part of the crew being formed of â€œRed Skirtsâ€. These background characters always faced vastly tragic deaths whenever accompanying Enterprise personnel on â€˜away missionsâ€™. Will the same apply here?

Absolutely â€“ the Red Skirts will litter the game not only as a homage but also as interactive tool tips throughout. So when you find a dying crew member they will do their best to aid their captain with their dying breathâ€¦

Who else forms Jasonâ€™s crew?

Within the first story arc thereâ€™s room for three more personalities. In the number 2, Orpheus – Jason’s Egyptian second in command and logical to a fault (inspired by Spock), Philoctetes – our Irish drummer on the Argo, giving it everything he’s got (ie. Scotty) and Peleus – interested in the bones, the ship’s doctor, dammit (no guesses who inspired him!)

These characters are again inspired by their ancient Greece namesakes but thereâ€™s a lot of artistic license in there that uses more Enterprise than Argo in their delivery. 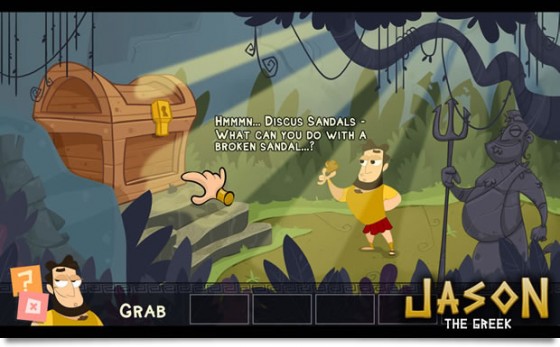 Are there any influences towards the art-direction?

Yes, totally â€“ the art direction took me a long time to decide on; I worked through loads of different styles before I settled on this one. I want the game to look like youâ€™re playing a cartoon, the interface will be hidden when youâ€™re not using it to leave it all open.

Iâ€™d say I took a lot from the Inspector Pink Panther cartoons, as well as from a lot of Cartoon Network 2D animations such as Johnny Bravo (love that) and Fosterâ€™s Home for Imaginary Friends too!

One mention is the amazing artist Jeremiah Alcorn who really inspired a lot of the look and feel to the scenery and rooms overall!

Whatâ€™s a suitable comparison to the gameâ€™s interface?

Interface wise Iâ€™ve taken a lot of inspiration from the UI layout used in the Hector: Badge of Carnage series although mine is hidden when not in use as I want to keep the look and feel as uncluttered as possible.

With regards to puzzles, will â€˜out of the boxâ€™ thinking be required? Or just simple logic?

A real mix of both. I want to immerse you in the environment so you may well have to use random items for more real world tasks such as a crab claw to cop down a branchâ€¦ Iâ€™ll say no more ;)

Will there be some sort of hint system to prevent anyone hitting proverbial brick walls?

Yeah, I was thinking that the Red Skirts could really help with that but also thereâ€™s going to be plenty of hints and tips in the environment itself. That and I am also toying with an â€˜ask the Godsâ€™ option where you can ask them for advice using a dialogue much like with other characters although I donâ€™t want to make it too easyâ€¦

How did Chris Jolley come to be involved?

Chris and I worked together at Jagex and became good friends when working on various projects together. Since then Chris and I have left Jagex but whenever Iâ€™ve had an game or idea that needed expert audio heâ€™s the man Iâ€™d turn to.

Which single aspect are you pleased with the most?

It has to be the games look and feel, Iâ€™m just really happy with the character and the whole look of the game. Itâ€™s really pushed me as an artist and each room is even better than the last!

How long can we expect Jasonâ€™s adventure to last? And will there be sub-quests?

As a one man team thereâ€™s only so much I can do for this release but I would expect an hour to an hour and a half conservatively, more if you hunt for every little Easter egg and less if you just power through! That said I hope to do add on sub-quests as well as different paths to up the replay value. 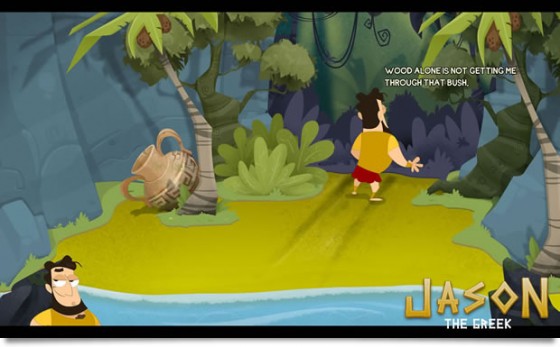 A demo is now available to download. Has feedback lead to any changes?

Absolutely, although with the Kickstarter campaign in full swing thereâ€™s not been much time to get back into it as yet. One thing that has come up is that there need to be more visual cues as to what you can or canâ€™t interact with as well as certain bugs and bits that Iâ€™ll be working on ASAP.

Oh, and one person mentioned that the trees all look the same so Iâ€™ll be planting more trees too!

Talk us through the Kickstarter pledge goals. Especially the one that involves yourself parading around in a toga in Trafalgar Squareâ€¦

Ha, yes wellâ€¦ for a Â£1 Iâ€™ll be standing in Trafalgar Square reading out the name of everyone whoâ€™s pledged â€“ or at least the name they give me, anyway! That idea came to me in summer â€“ didnâ€™t think that one through now that itâ€™s December! Other than that there are the various tiers that get you a copy of the game, starting at a bargain Â£2 leading through extras like having a statue bust of you in game for Â£30 up to actually BEING a Red Skirt and letting me know how youâ€™d like to die (in game).

I also put up a few ideas that are adventure game related so Iâ€™ll provide half a dayâ€™s training to teach people how to make adventure games or how to design them.

Are there any plans to bring the game to consoles?

Iâ€™m not sure on consoles, as such, but I have every plan to port it onto iPad and other tablets!

Finally, if you could beam yourself into any episode of Star Trek which would you choose?

Thereâ€™s really two that Iâ€™d go for I reckon, either â€˜Mirror, Mirrorâ€™ in the original series if only to wind Spock up about his goatee or â€˜The City on the Edge of Foreverâ€™ to be there when Kirk just turns and says â€œLetâ€™s get the hell out of hereâ€.

Funding permitting, Jason The Greek should be with us next Summer.