Considering how heavily Microsoft were pushing the Kinect when the Xbox One was first shown, itâ€™s a little strange that Zoo Tycoon downplays the fact it offers optional Kinect support. The case doesnâ€™t even feature the notorious â€˜Better with Kinectâ€™ branding on the front, instead just briefly mentioning motion controls on the reverse.

To find that this franchise reboot can be played using just a good old joypad was something of a relief. This is mostly because while we could appreciate how much work Frontier had put into the likes of Kinectimals and Kinect Disneyland, the motion controls didnâ€™t always work as well as they should have.

We were slightly less pleased to discover that it doesnâ€™t feel quite as lavish as Frontierâ€™s aforementioned previous efforts. A lack of vocal work, other than the short quips from the zooâ€™s guests, is a particularly curious omission while the clean-cut presentation is a little on the plain side. Fortunately itâ€™s no less likeable package on the whole thanks to a strong dose of animal magic.

Three different modes are on offer – challenge, scenario and freeform. Challenge mode is the main campaign, owing its name to fact that optional challenges pop-up every few minutes. The scenario mode on the other hand entails taking over pre-built zoos from all over the world and then working through long lists of challenges against increasingly tight time-limits. Finally, freeform mode is intended for those who want to build without restriction. Well, with no restrictions other than the limit to the amount of stuff you can plonk in the park. 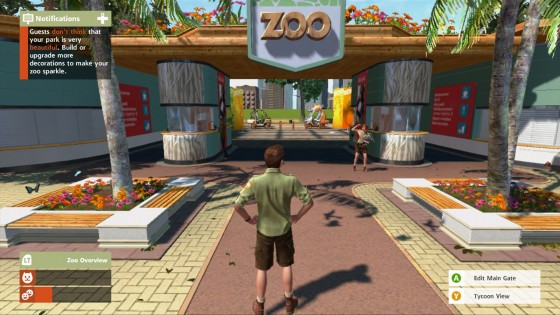 To begin with only a small assortment of animal are available, with the rest requiring research and certain â€˜zoo fameâ€™ levels to unlock. Smaller creatures, such as iguanas and meerkats, are inexpensive while the likes of elephants and giraffes cost considerately more. Each animal type is best suited to certain enclosure types – all of which are pre-designed – and if you donâ€™t include food stations and something to keep the inmates amused then youâ€™ll have to face endless prompts telling you to do so.

Rest assured that if something is wrong, youâ€™ll soon know about it. Prompts to pick up poop are irritatingly frequent, although there is a â€˜Poop Masterâ€™ achievement to be had as a reward for picking up 1,000 plops. Charming.

Other chores requiring attention include refilling food stations and replenishing water for the cleaning facilities. Those who want to simply focus on park planning and making sure the guests are satisfied will no doubt be pleased to hear that itâ€™s possible to hire staff to carry out the dirty work.

In addition to the adjustable admission fees, shops selling all kinds of sugar-loaded treats help to provide income. To further enforce the incredibly relaxed vibe, we rarely felt the need to keep a beady eye on cash flow. As long as the zoo is kept tidy and has a varied selection of animals the public will happily pay whatever ticket price has been set. Failing that, there are advertising campaigns to splash out on.

Completing challenges boosts the zooâ€™s fame, as well as providing bonus donations. Some of the simpler challenges involve a spot of photography, while one of more elongated ones entails dropping off medicine by jumping into a buggy and stopping off at every single enclosure. The zooâ€™s buggy can be summoned at any time so it matters not where it was left last. In fact, itâ€™s possible to teleport all around the park in a blink of an eye, via the top-down â€˜tycoon viewâ€™ screen. Itâ€™s a very handy feature that prevents an immeasurable amount of wandering around.

Incidentally, paths are automatically placed. This does lead to the landscapes becoming a little messier than we would have liked, but it is at least a nice and simple way of doing things. The interface too is simple, allowing exhibits to be placed, moved and altered with relative ease.

The â€˜tycoon viewâ€™ screen offers a complete overview of the park but itâ€™s not the best way to marvel at what youâ€™ve created. Itâ€™s walking around the zoo as your customisable keeper thatâ€™s the most pleasing way of doing so. Children run around with arms spread wide, occasionally performing monkey impressions by scratching their armpits. Adults lean against enclosures and discuss the sights before them, while staff enthusiastically go about their duties.

Neat touches are frequent, such as how itâ€™s possible to catch the janitors slacking off only for them to then spring into action as soon as they realise theyâ€™re being watched. The animals meanwhile act in a pleasingly realistic manner, chasing one another and interacting with the toys placed in their enclosures. Itâ€™s also possible to interact with them yourself by grabbing a hose to cool off the hippos and whatnot, or hand-feeding fruit to the giraffes and elephants. Thankfully Frontier has avoided temptation to turn these tasks into potentially tedious mini-games. 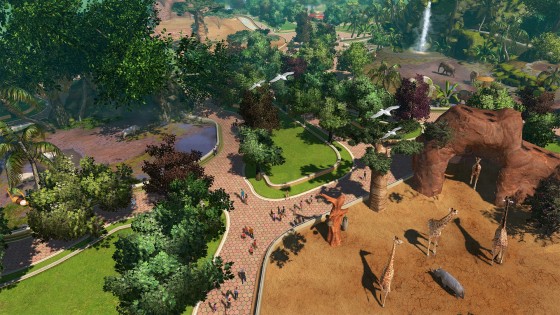 Completing challenges, raising fame levels, setting up breeding schemes and researching everything available to purchase provides plenty to focus on. Sadly though heavy repetition prevents any long term lastability. Looking after the animals isnâ€™t a taxing task in the slightest due to the way their food and water supplies require refilling only occasionally. Moreover, if the animals do ever become unhappy then adopting a new playmate or adding a toy to the enclosure usually increases their happiness levels instantly. Get this right first time and they will give you hardly any bother at all.

While we did tire of being a zoo keeper sooner than expected, this is still recommended to those fancying something carefree. It may not set your pulse racing, but for some thatâ€™s no doubt part of the appeal.