Itâ€™s hard not to be cynical whenever Activision announces a new licensed game. This is the publisher who gave the world the not only terrible but downright offensive Family Guy: Back to the Multiverse, along with an almost countless number of movie tie-ins that have been hastily knocked out over the years.

We did have a small glimmer of hope before slotting this new SpongeBob game into our console though. Itâ€™s by Behaviour Interactive, who made the actually pretty good Rango and Brave tie-ins. If only Activison was as concerning over quality as the publishers of those two.

We assume this recycles the game engine Behaviour used for Disneyâ€™s Brave as it too is a shooter. Yes, Brave was a shoot’em up instead of being some kind of incredibly generic platformer. If you can look past the fact that it stars a Disney princess, itâ€™s well worth looking out for on the cheap.

Even with four-player drop-in/drop-out play and a choice of five characters though, Planktonâ€™s Robotic Revenge isnâ€™t anywhere near as good.

This is lazy, wholly uninspired stuff. The plot for starters feels like an insult to how creative the cartoon series is. After a box of batteries are accidentally hurled overboard by a passing ship, Plankton uses said â€œtechnologyâ€ to create a giant robot and a mechanical army. Soon the safe containing the formula to the infamous Krabby Patty is in Planktonâ€™s grasp, but hope still remains for Spongebob and his pals as three keys are required to open the lock.

These keys just so happen to be located in the three areas the game is set, all of which vary in colour scheme only. Each level is as short and linear as the last, offering absolutely no scope at all for exploration. Activating switches in the correct order to unlock gates are about as interactive as they get.

After just an hour in the levels start to become a blur, right to the point where it gets hard to even tell when one ends and the next starts. Only the freefall sections that occur every now and then manage to induce a degree of variety. 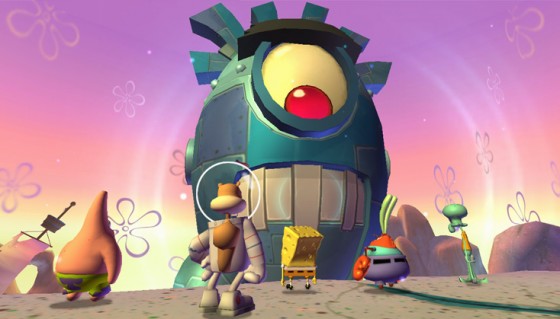 Although itâ€™s possible to melee attack enemies, the focus is primed on using a variety of weapons (or gizmos, as theyâ€™re known) to defeat Planktonâ€™s robotic army. These are unlocked and upgraded by collecting sprockets, varying from a â€˜condiment cannonâ€™ that sprays ketchup and mustard all over the place to wide spreading â€˜reef blowerâ€™.

Generally it matters not what weapon you use. They all cause the same amount of damage and have similar rates of fire once upgraded, and as such there’s no reason or encouragement to swap between them. To make matters worse, the incredibly generous auto-aim system is far too generous for its own good – around 90% of the game is spent running around with the trigger button held down while picking up the shiny sprockets enemies leave behind.

That final 10%? Roughly 5% platform jumping and 5% boss battling. All four boss battles feature the same giant robot. The only thing that changes are the attack patterns. See – we told you this was lazily designed.

The enemy assortment meanwhile is so low that you can count the amount of enemy types on one hand. Assuming you have five fingers, anyway.

Weâ€™ve often wondered if developers are sometimes laugh with regards to unlocking certain achievements, but this just about confirms it – five are linked to fully upgrading the weapons for each character. As we didnâ€™t fully upgrade our first character until the very last level, we estimate that someone would have to finish the game five times in total to gain all 1000G.

Perhaps achievement hunters, if nobody else, will be thankful that the whole thing can be done and dusted in just over two hours. Shameful.