Rather than become one of EAâ€™s annual updates, DICE has been allowed two years – if not more – to get Battlefield 4 shipshape. Boy does it show. If their Frostbite 3 engine doesnâ€™t push current tech to its fullest, then it must be extraordinarily close.

Not only is it something of a treat for the eyes, but it feels fresh too due to a notable amount of nips and tucks. As you may expect though, some of these are more significant than others.

Itâ€™s the single-player campaign that has had the biggest overhaul, and we were genuinely surprised by how much we enjoyed it. The amount of missions (eight, for the record) may be less than its peers but theyâ€™re impressive in size and length, with a few lasting a good hour or so. Itâ€™s the amount of freedom that really impresses though – in most occasions the use of vehicles is entirely optional, while weapon stashes let you choose your tools for the job.

Thatâ€™s providing youâ€™ve unlocked them first. Additional weapons and gadgets, such as mines, are added as and when theyâ€™re discovered on the battlefield. Every mission has two or three rare weapons to pick up by defeating heavily armoured enemies, which is a very welcome alternative to searching for laptops and the other usual collectables found in first-person shooters.

Centred on escorting a pair of VIPs across a storm-battered part of Asia, the story isnâ€™t particularly ground breaking but itâ€™s well told and backed by some of the finest voice-acting of recent times. 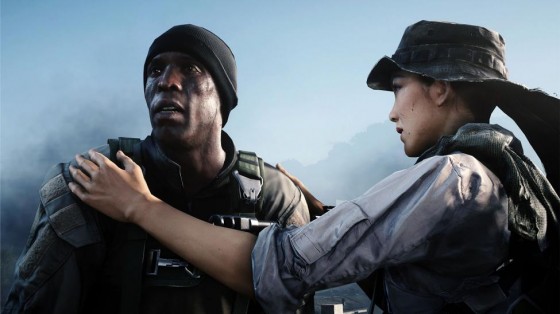 Team Tombstone, as theyâ€™re known, show more compassion than you may expect. The instantly likeable Irish goes out of his way to help innocent citizens on more than a couple of occasions, while newcomer Pac has only been in the army for a year and as such is still overly cautious. Chatter between the troops varies from how hungry they are, to going into trust issues in great depth.

The second half of the story sees a female join the team, and although a proficient fighter her motives are questioned on several occasions. Female soldiers are well represented in fact, and rightly so. A highlight as far humour is concerned sees the team meet up with a female officer suffering from some serious caffeine withdrawal issues.

Even the linear prison mission is a pleasure, due to starting off with a spot of stealth before unleashing hell onto the prison guards. With a Russian inmate joining the team, trust plays a part here too. This level is reused partly in multiplayer, and with an abundance of corridors and other tightly packed locations, battles can be pleasingly chaotic.

The score system is another thing that makes the single-player surprisingly enjoyable. Every mission has medals to unlock by obtain certain scores. 50 points are awarded for a simple squad kill – a command activated via a press of the RB button – while significantly higher amounts of points are gained for killing multiple enemies at once with a well timed explosive. Predictably, head shots also give a score boost. Itâ€™s a very simple set-up but itâ€™s one that makes combat that little bit more satisfying.

A challenging difficultly – even on normal mode – gives the campaign a further degree of gratification. This is no dumb run and gunner – find yourself exposed in a hostile area and you wonâ€™t last more than a few seconds. This is where the recon binos come into play, highlighting enemy locations clearly. From a very early stage surveying the surroundings is encouraged while on the hardest difficulty level itâ€™s downright essential for survival.

The impressive level of freedom continues into the multiplayer mode, as does the ability to call out enemy locations. This prevents â€œcampersâ€ from getting away with hiding in single locations for too long, and can also expose sniper locations to everyone on your team. If your â€˜heads upâ€™ leads to a kill then extra points are earned.

For us, the ability to earn XP for feats other than gunning down enemies really appeals. Play as a recon solider and itâ€™s possible to level up quickly by simply throwing med packs to the wounded. Protecting and capturing bases on the ever popular Conquest mode can likewise earn a steady slew of points, not to mention a fistful of collectable ribbons.

Levelling up bags new kit – health packs can be traded for deliberator units; grenades swapped for mines. RPGs meanwhile can be upgraded to launchers with lock-on abilities. An unfair advantage, granted, but neverless these unlocks do feel like significant rewards for both time and effort. 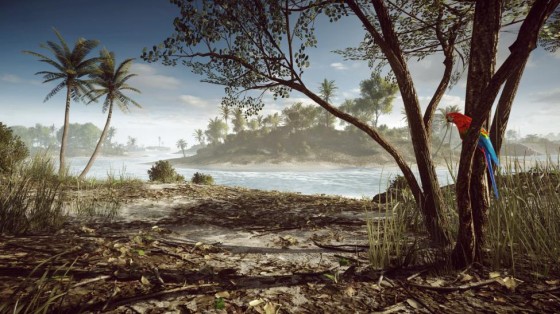 Ultimately, itâ€™s the ability to change tactics on the fly that keeps multiplayer feeling fresh. As the levels change, so do the tactics. When spotting an enemy tank on one of the impressively large battlefields, it’s wise to then respawn as an engineer equipped with a rocket launcher. Thereâ€™s no point playing as an engineer on the aforementioned prison level however due to the lack of vehicles. A better idea would be to play as a recon unit to heal the team in an attempt to keep the body count as low as possible.

A map based around a group of islands meanwhile has a focus on naval combat. Filling a ship with ready and willing troops and then storming an isle together can be incredibly thrilling.

Faults are pretty negligible, such as the occasional glitch. Destroy a building and you may find some rubble or whatnot floating in mid-air. We also found it a little odd that of the 42 achievements, only 5 are linked to multiplayer. Odd because weâ€™re fairly certain there will be people out there who wonâ€™t even touch the single-player mode. Their loss.

Although chances are EA may squeeze another Battlefield onto current-gen consoles, Battlefield 4 still manages to end this generation on a high while ushering in immense possibilities for the future. Itâ€™ll bring out your inner solider, even if you never knew such a thing existed.