New kid on the block LEGO Marvel Super Heroes builds on Lego Batman 2: DC Super Heroes in every single way, critics claim. We have no reason not to believe them – reviews went live as way back as 22nd October, including a 9.0 from IGN and 9/10 from Eurogamer. It speaks volumes that Warner Bros. sent out review copies as early as they did. 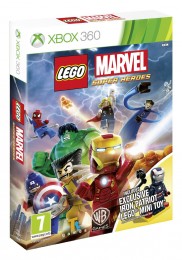 Itâ€™s out on Xbox 360, PS3, PC and Wii U this week, with the PS4 version due at launch and the Xbox One version due in the not too distant future. It was delayed earlier this week for reasons unknown.

Amazon, amongst others we believe, have a limited edition pack containing an exclusive mini-figure.

The handheld iterations – subtitled Universe in Peril – are also arriving on DS, 3DS and PS Vita this Friday. We canâ€™t find any reviews of them online yet, so approach with caution. Previous handheld LEGO games in the past have varied in quality.

Oddly, there are couple next-gen games launching this week – Call of Duty: Ghosts on Xbox One and Skylanders: Swap Force on both Xbox One and PlayStation 4. Whether your local game emporium will stick them out on their shelves is another matter – we havenâ€™t seen CoD: Ghosts on PS4 for sale yet, despite it launching the same day as other versions.

Going back to basics, itâ€™s very much one for the fans reported EDGE in their 5/10 review. NowGamer and Destructoid like it a lot more though, both awarding the colourful collect-a-thon an 8.

The brilliantly named Adventure Time: Explore the Dungeon Because I Don’t Know also arrives on PS3 and Xbox 360, with Wii U and 3DS versions due mid December. Why? We donâ€™t know.

Itâ€™s a top-down dungeon crawler in the style of Gauntlet, for up to four-players. In the past WayForwardâ€™s games have appealed to large audiences due to the way they always manage to blend a degree of retro charm into everything they touch. All signs point to that being the same case here. It shouldnâ€™t set you back much more than Â£25 if you scout around online.

XCOM Enemy Within can likewise be found for Â£25, with reason being that itâ€™s not an entirely new game – itâ€™s an expansion pack for last yearâ€™s XCOM: Enemy Unknown, offering new solider abilities, weapons types, challenges, multiplayer maps and more.

Itâ€™s interesting to note that the age rating has rocketed all the way up for 12+ to 18+ so weâ€™re guessing that there are more swears and giblets too. Review scores have been high with a fair few 9/10s handed out, such as this one from Eurogamer.

Deadfall Adventures on Xbox 360 and PC is one that weâ€™ve given the review treatment already. Itâ€™s clunky in places, but we managed to find a sense of adventure under those low budget looks, and ultimately enjoyed its mixture of first-person shooting and puzzle solving. We gave it a not too shabby 6/10.

Scores from other sites have been more than a little mixed – everything from 1/5 from Empire Online to 5/5 from Gaming Shogun.

The Walking Dead Game of the Year Edition strikes us as an odd release seeing the retail collection of Telltaleâ€™s very special series was only released in May. This second collection adds the highly enjoyable 400 Days spin-off story, along with a bonus download of the soundtrack. Â£25 seems steep, seeing Episode One is still free on XBLA while the other episodes only cost Â£3.39 each.

Sony must be still have faith in the Wonderbook, as this week sees two new games designed for the magical accessory – Book of Potions and Walking with Dinosaurs. Presumably the latter is to tie-in with the upcoming movie. They should keep the kids quiet for a bit, if nothing else. 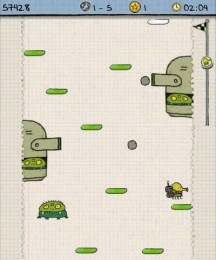 Then on 3DS and DS thereâ€™s LEGO Friends along with the budget-priced Doodle Jump Adventures which features a new story mode. Itâ€™s Â£14.99 on Amazon if youâ€™re curious.

Finally for the week’s retail releases there’s Rugby League Live 2 World Cup Edition from the often-forgotten publisher Alternative Software. This adds a World Cup Competition mode and an expanded 25-year 2013 career mode to the year-old Rugby League Live 2. With no other rugby games out there, fans of the sport donâ€™t really have much alternative. No pun intended.

Over on the Nintendo eShop(s) thereâ€™s PICROSS e3 and murder mystery Secret Agent Files: Miami for Â£4.50 and Â£6.99 each respectively, while Mega Man X2 leaps onto Wii U VC for Â£5.49.

Theyâ€™re joined by a last minute inclusion Jett Rocket II: The Wrath of Taikai, from Nano Assault developers Shin’en. The trailer for that can be found here.

Just two XBLA games this week – M.C Escher inspired puzzler The Bridge and Contrast, a curious looking adventure set in the 1920s where itâ€™s possible to change from 3D to 2D movement via shadows.

Unless weâ€™re mistaken, itâ€™s going to be one of the first PlayStation 4 games offered to PS Plus subscribers for free. Scores so far include a 7.5 from GameInformer.

PlayStation 3 have something new to play on PSN too – 1080p shooter Velocity Ultra. The original Velocity was a firm PS Mini favourite, and rightly so.