It can be fascinating to discover how a pre-conceived mental image of something can be entirely different from the reality. After watching the trailers for this FPS prior to release we thought we were in for a simplistic run and gunner, much like The Farm 51â€™s own Painkiller: Hell and Damnation.

What weâ€™ve ended up with is the almost opposite – a surprisingly slow paced shooter where just as much time is spent solving puzzles as it is blowing bad guys to bits. Think along the lines of a first-person Tomb Raider and you should have a better idea of what to expect than we did initially.

Thereâ€™s no sports-bra wearing female lead here, however – youâ€™re placed into the boots of the rugged hero-for-hire Lee Quatermain, a man only a whip short for passing as a double of a certain Dr. Jones. Nods and winks to the Indiana Jones trilogy are incredibly frequent, including the plot – a globe trotting quest set in 1938 to find the mystical The Heart of Atlantis before it falls into the hands of a Nazi cult.

Lee is joined by Jennifer Goodwin, an archaeologist who isnâ€™t afraid to go in all guns blazing when the occasion calls for it. She also provides vocal hints for the abundance of puzzles that feature.

As well as a pair of rickety old pistols, Quatermain takes a notebook on the journey. This pad full of rough sketchings was handed down by his Great Grandfather, who likewise once tried to locate the Heart of Atlantis.

Trying to decipher his Grandfather’s scribbles is often integral to puzzle solving, especially for the ones that require stones decorated with ancient symbols to be either aligned or slotted into the correct places.

Others involve directing beams of light with giant mirrors to cast silhouettes onto walls, while some of the optional puzzles found way off the beaten path resemble the sliding puzzles usually found in posh Christmas crackers. 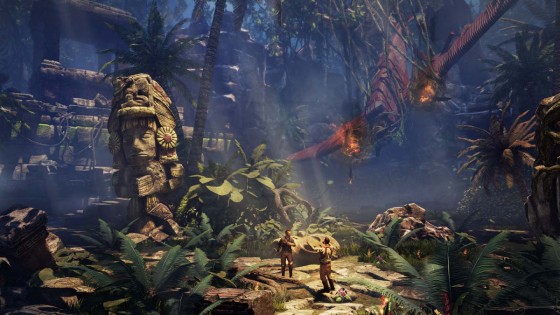 The difficulty level of these brain benders has been kept separate from that of the combat, so if youâ€™re finding one easier or tougher than the other then they can be adjusted independently.

If only as this much thought had been put into the checkpoint system, which is by far the biggest fault. In a game where traps can be activated without warning, bellowing flames and shooting spears through the air, having checkpoints sometimes ten minutes apart simply isnâ€™t good enough. Youâ€™re even forced to collect treasures and solve puzzles again should you die before the auto-save kicks in.

A somewhat less irritating downfall is that the quality of voice acting and dialogue are both on the shoddy side. Quatermain in particular has a tendency to use cheesy phrases, blurting out â€œWell, that has fun!â€ at the end of almost every gunfight. Not all of his lines are this cringe-inducing, but those that aren’t are few and far between.

Fortunately for the sake of atmosphere, Deadfall does fair better visually – there are some very alluring sights to take in, varying from Mayan temples that have been left untouched for centuries to an underground mine cart section that sees the scenery whizzing past at a frantic rate. For a presumably small budget production it does look very accomplished at times.

Combat likewise gratifies. Gunfights arenâ€™t anything too fancy, but the fact that the mummies who haunt the tombs have to be set ablaze – either by fire or the light from Quatermainâ€™s torch – stops shoot outs from being branded as brainless. Also of note is how ancient traps can be used against enemies, while during a section set in a cave itâ€™s possible to shoot the icicles off the ceiling so that they fall onto the hapless enemies below. A simple idea, granted, but itâ€™s one that pleases.

By the time the story came to a conclusion – some eight hours or so of mostly entertaining exploration later – we did feel as if we had part of a genuine adventure. Set-pieces are frequent while hidden areas containing ability-boosting treasures are high in number, not to mention cunningly placed. There’s a secret cave in the Mayan jungle which has its own puzzle to solve, both of which are easy to miss altogether if you don’t study the map closely.

The storyline may be incredibly predictable but it flows well thanks to the variety of locations. We also see Quatermain go from tagging along simply for the money to eventually wanting to save the world. Heâ€™s a likeable character, even if he does sound like Terry Wogan putting on an American accent. 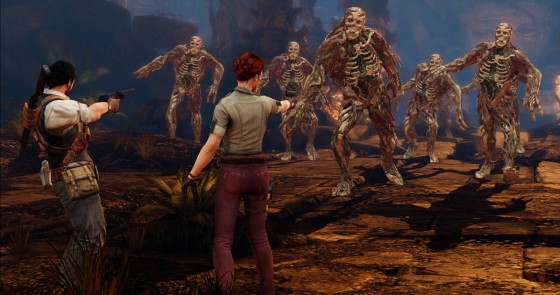 Going somewhat beyond the call of duty, a generous selection of online modes have been thrown in for good measure. These are narrated by a softy spoken female and are set in maps designed in a very similar fashion to Unreal Tournament and other online shooters of yore.

Traps make another appearance, and here they can help to even the odds when up against players who have unlocked some of the better weapons on offer. New players shouldnâ€™t worry at all, in fact – one of the match types is exclusively for low-level players so that they can learn the ropes without being shot to smithereens. The survival mode, meanwhile, sees four players take on waves of enemies while waiting for supply drops of ammo refills. A lack of enemy types does rob this mode of any lasting appeal, however.

Deadfall Adventures may be clunky in places, but it has a heart thatâ€™s firmly in the right place. Itâ€™s the kind of game that we wish we didnâ€™t have to stick a score to – coming from a small studio it was never going to be able to compete with the likes of Tomb Raider and Uncharted. Yet with a decent selection of puzzles and a desire to do things slightly differently, The Farm 51 have managed to make something with the elusive sense of adventure that some developers forget to include.