If smothering Star Wars all over the Angry Birds franchise helped Rovio’s avian associates to make even more money, then why shouldnâ€™t the license be applied to other mobile games? Ten minutes later and weâ€™re still trying to think of a valid reason. 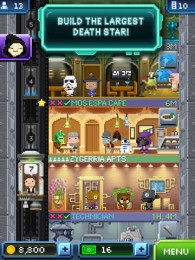 NimbleBitâ€™s Tiny Tower may not be quite as well known as Angry Birds, but it was crowned Appleâ€™s iPhone game of the year back in 2011 after gaining some very high review scores. Due to being a simple reskin rather than a total overhaul, fans will no doubt be pleased to hear that Tiny Towerâ€™s prize winning formula hasnâ€™t been interfered with at all.

The premise is simpler than a Ewok – lure Bitizens to the Death Star by building accommodation and various businesses, and then (blue) milk them for all their worth. Shops and recreational facilities have to be restocked with goods, and thus stock levels have to be kept a close eye on, and every Bitizen has also has to be allocated a line of work.

Some Bitizens are more skilled at certain things than others, so itâ€™s wise to spend time hiring and firing accordingly to get the Death Star running as smoothly as possible.

Money is made even when the game isnâ€™t being played, but it comes a lot quicker by interacting with the tiny folk. The elevator something is a focal point – every few seconds a Bitizen asks to be taken to a certain floor, which will earn a small tip. To start with, and during tutorial especially, extra floors cost relatively little but soon escalate in cost to the point where adding an extra floor becomes a rare occurrence. Tips from the lift can help the Death Star to become fully functioning sooner, but for that to happen you’ll have to put the effort in. 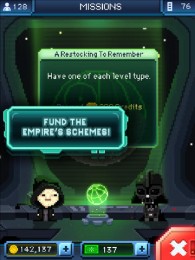 Rewards for doing so come in various forms. There are some short and snappy cut-scenes to unlock while every now and then a VIP guest will visit. Some which are more than happy to buy all your stock in one fell swoop. Completing sub-missions for Darth Vader are rewarding too, bestowing extra credits and Imperial Buxs that can be used to speed up processes and unlock improved elevators that bag bigger tips.

Being a free-to-play game IAP do unsurprisingly feature, ranging from Â£2.99 all the way up to a frankly absurd Â£69.99. Youâ€™re never nagged to make additional purchases, thankfully, but you may find that the notifications generated when not playing do start to annoy rather quickly.

Play Tiny Death Star excessively and chances are that youâ€™ll grow bored of restocking shops and chaperoning the Bitizens after just a few days. Savour the experience though, playing it just for a few minutes at time, and it should serve you well. The attention to detail in lovingly rendered 8-bit backdrops is sure to please fans of all ages, even if some liberties have been taken with the license. Long time Star Wars die-hards must be pretty use to this by now though. And if not, then they ought to be.