The problem with releasing a rhythm-action game on 3DS is that despite the handheld arguably still yet to hit its peak, it already has two very fine examples of the genre – Final Fantasy Theatrhythm and Segaâ€™s Rhythm Thief. Thereâ€™s no shame in settling for third place though, where is exactly where Natsumeâ€™s ghostly grooveâ€™em up finds itself. 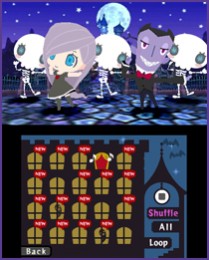 The titular Gabrielle faces an out-of-body experience after a colossal sneeze sends her spirit rocketing through the air. One benefit of this is that sheâ€™s now able to communicate with her cat Lola, who has some rather unlikely connections with the undead.

To become her former self once again Gabrielle must collect â€˜screamsâ€™ by performing the Ghostly Groove across the ghoul-filled town of Monsterville.

When not dancing to the beat – via some well timed taps and strokes to the touch-screen – Gabrielle finds herself helping out members of the underworld by partaking in some simple yet pleasing mini-games. The first of these is a memory matching game that becomes a whole lot easier if you have a camera phone at hand. A little tip, there. 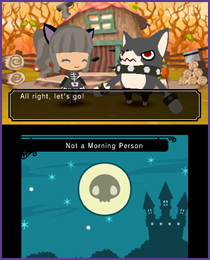 Screams are also used as currency that can be used to purchase extra outfits and such, allowing you to customise Gabrielle as you see fit.

Itâ€™s not a bad little game at all, and as an added bonus the recent eShop release is the full game and not the same cut-down version which Natsume chose to release elsewhere in the world.

We would have enjoyed it a lot more though if it wasnâ€™t so alarmingly text heavy and had the music been a little bit jauntier – the majority of the musical score is formed of simple ghostly revamps of national anthems and such. Still, weâ€™d much rather play this than one of those frightfully bizarre looking Monster High games. Shudder.