When gamers grumble about the imminent arrival of next-gen consoles, proclaiming that the Xbox 360 and PlayStation 3 still do their job in a more than satisfactory manner, a little fact we like to bring up is that the Xbox 360 iteration of Black Ops took up so much space that only a paltry 1MB was left on the disc.

With this in mind, itâ€™s quite discouraging to find that even with next-gen versions, not to mention a forced install – Ã  la GTA V – for the Xbox 360 version, Call of Duty: Ghosts feels like a step backwards for the franchise.

Quite what the developers have used that extra storage space for is a mystery. It doesnâ€™t look any better than previous Call of Duty games – at least on Xbox 360, some shoddy shadows effects aside – and at around 5 hours or so the single player campaign isnâ€™t any longer than what weâ€™ve seen before either.

When compared to Black Ops II – which experimented with a few new ideas, lest you forget – innovation is especially low on the ground. Ghosts shows its hand surprisingly early in fact, with one of the first missions adding canine companion Riley to your team of supremely stealthy soldiers. Although itâ€™s pleasing to have both direct and indirect control over Riley, the inclusion of some animal magic doesnâ€™t add a great deal. This is partly because Riley is only available to command for this one single mission.

Another reason is because of the gung-ho nature of the game, no real emotional attachment is felt. Like the good boy he is, Riley will bite enemies when instructed to and thatâ€™s about as far as involvement goes. We were hoping that the ability to bark in order to distract enemies would lead to some unexpected, totally unscripted, moments, but this too is an idea thatâ€™s underused. Or indeed, isnâ€™t used at all. 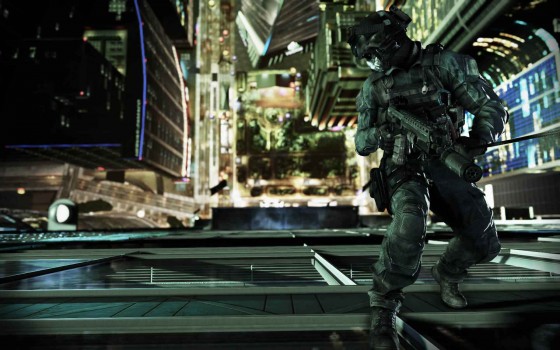 Of the 18 levels on offer, only two stand out as outright highlights – a frankly brilliant siege into a skyscraper, which includes a spot of repelling followed by a swift exit on parachute, and an alluring underwater mission that sees wetsuited and booted enemies attacking from all angles. Gunplay is slightly sloppy during this section however, which leads to a few unfair deaths. Sign posting is also on the whole sloppier than before, causing a stealthy jungle mission to be tougher than it should be.

Ghosts feels like a step backwards for the franchise

Even with the highlights mentioned above, never does Ghosts feel fresh and new. If anything, it plays like a slightly rejigged collection of the best bits from Call of Duty games of yore. It has helicopter and tank missions, of both the on-rails and free-roaming variety. It has a mission in a snow covered mountain base. It has a mission in a flooded city. It has laptops as collectables, yet again. It even sounds incredibly similar to Call of Duty games of past – weâ€™re pretty sure that the vast majority of vocal work has been recycled, with the AI teammates yelling the same old, clichÃ©d, phrases every few seconds. 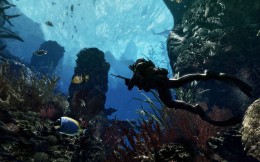 In the developerâ€™s defence, the pace is fast throughout and never is it a bad game. The guns are impressively detailed and each sounds as meaty as the last; animation is smooth and lifelike and the AI isnâ€™t quite as predictable was it was once. As a whole however the single-player campaign doesnâ€™t â€˜wowâ€™ like previous Call of Duty games have done before, and as a result it doesnâ€™t feel like anything particularly special.

Thankfully, the online modes do make up for the short comings of single-player. The omission of an achievement of becoming â€˜Prestigeâ€™ is somewhat negotiable, but apart from this the multiplayer modes are the most comprehensive that they have ever been. Customisation options are high in number – including the chance to play as female soldiers – while the maps are notably larger. They arenâ€™t large enough to get lost in, but we did find ourselves going without spotting a single enemy for longer periods. The Killcam, meanwhile, remains as integral to the experience as always.

A new Squad mode give the chance to play against some unexpectedly sophisticated AI, while Extinction mode more than makes up for the lack of a Zombies mode. Fans of Gears of Warâ€™s Horde multiplayer will be in their element here as they place turrets, arm defences and purchase new weapons to deal with an alien threat. The difficulty of this mode is surprisingly tough due to the scarcity of ammo supplies, not to mention the alienâ€™s slightly irritating ability to spit highly corrosive goo all over the war-torn environments. With a team keen to work together, focusing on completing challenges and quite happy to share their spoils, Extinction really engages.

Itâ€™s fair to say then that online modes are strong enough to elevate Ghosts out of the realms of mediocrity. The fact still remains though that in comparison to the polished Black Ops II this still seems like it has been knocked out on lazy auto-pilot. Itâ€™s not as formulaic as EAâ€™s Medal of Honor: Warfighter – and God forbid such a thing will never exist – but that doesnâ€™t prevent it from feeling like stopgap product in the way that 2008â€™s Call of Duty: World at War was. We can only assume that Infinity Ward have been working on something huge for next-gen consoles alongside this. Whatever it is had better impress, as â€˜franchise fatigueâ€™ is now well and truly starting to settle.