Fist of Awesome has been one huge charm offensive: from the early animated GIF screenshots, through the doubling-its-target Kickstarter, to designer Nicoll Huntâ€™s beard.

It’s been either: (a) a cleverly orchestrated PR campaign; (b) a demonstration of the benefits as an indie developer of being a bit different; or (c) proof that people really really want to punch a bear IN THE MOUTH. 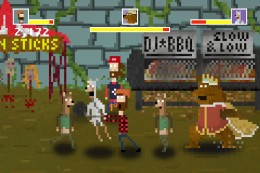 The game will certainly sate that particular desire. For enjoyably irrelevant reasons, Tim Burr’s fist has taken on a personality of its own, and he must avenge or rescue or something his family by lamping an awful lot of wildlife. And there’s kicking and stomping and shoving and throwing, as well as a charged punch, in addition to your common-or-garden punching.

That little lot is handled admirably by the gesture controls. Logical taps and swipes on the right of the screen take care of the action – tap to punch, swipe up to jump, down to stomp etc. Only the pushes and throws are a little awkward, and as always a virtual d-pad – in this case wherever you touch on the left of the screen – is less precise than you’d ideally like, but it’s as good as it’s going to get.

It’s a solid scrolling fighting game mechanic, but not quite enjoyable enough on its own to carry the game. The storyline and humorous touches dotted around the levels hit more often than miss, but again, aren’t quite enough to carry the game. 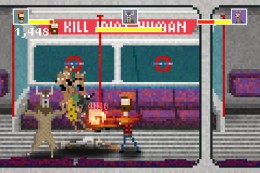 What’s missing is a bit of variety. There’s little more than superficial difference between the basic enemies in each level, and the boss bears are all essentially the same. They just get more power and more health, and you’re faced with more of them. It’s a similar story with Tim Burr himself: levelling up just lets you increase your health, power, speed or special.

With no new attack moves and little enemy variation, and no weapons to use or items to collect, it’s all very samey. Keep all the enemies in front of you, punch your way through them, repeat on the next wave; get surrounded, and you may die. It started to tire a little towards the end of the few hours it takes to see it through the first time, though with generous checkpoints it never strayed into frustration.

Extra levels and characters, and a multiplayer mode, are being added for the forthcoming PC and Mac version, and will filter down to iOS and Android thereafter. I can’t help feeling that’s not what we game needs though. It’s nailed the controls for a touchscreen scrolling fighting game, and has all the personality it needs. Throw in some more significant progression – both player and enemy – and I could love it as much as the charm offensive made me want to.