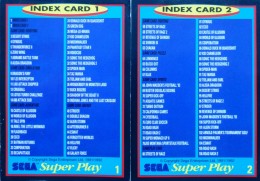 The 120 cards were split into several sections. First, and most excitingly, were two index cards.

Oh the joy of peeling apart the shiny silver foil wrapper of a fresh set of cards to discover that it contains an index card! An experience only bettered by finding an index card that you already had. You couldn’t have too many lists of the other cards in the set.

We may never know whether Panini or Sega had the idea for the index cards, but we must thank them for introducing the children of the early ’90s to the exhilaration of a good bit of admin. It also meant that collectors with an incomplete set knew what they were missing out on. In my case: #6, the Zero Wing game card; and #54, the Super Hang-On game card. I got over it. 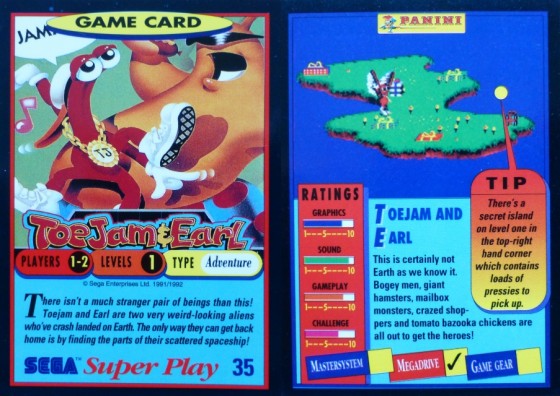 The bulk of the cards – 77 of the 120, numbered 3 to 79 – were game cards. These were split into genres: shooting (6), simulation (6), adventure (25), arcade (19), fighting (5), puzzle (4) and sports (12). It’s nice to see the good, old fashioned, meaningless genres again, isn’t it? Motley Crue-themed pinball game Crueball sat alongside the likes of F-22 Interceptor in simulation; Phantasy Star II followed immediately after Moonwalker in adventure. Lovely work.

The game cards featured a short bit of text on both the front and back. It was clearly a struggle to fill these; most were bland descriptions of the story, gameplay or features. The back of Greendog, for example: “Green Dog is a great-looking scrolling platform adventure in which the hero battles the island’s many aggressive residents in his quest for treasure pieces.” Sold!

There were some slightly more interesting facts among the cards though. DecapAttack, for example: “Here’s an interesting fact. In Japan, this game was released with slightly different graphics and called ‘Magical Hat Flying Adventure’! What a mouthful!!” Ah yes, a lot of the writing was rather fond of exclamation marks. 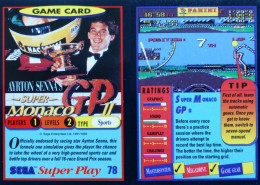 A few of the cards give a little insight into how far we’ve come since the early ’90s. The Phantasy Star II card, for example, mentioned the battery backup. “This means that you can continue from where you left off – even after switching off!” It’s easy to forget how unhelpful games used to be.

The game cards also featured ratings out of 10 for graphics, sound, gameplay and challenge. As licensed Sega products, they tended towards the generous side, but not exclusively so. Aquatic Games got a bit of a mauling – 7 for graphics, 5 for the rest; Flicky got just 3 for graphics and sound (though 9 and 7 for the others). Double Dragon stood out a bit too, with 7, 6, 7 and 5.

The ratings and text weren’t always exactly consistent. The 5/10 gameplay in Aquatic Games, for example, was described separately as “very polished”. Or take Gynoug: “Graphics, sound and gameplay are all excellent.” That got 9 for graphics and sound, 6 for gameplay. Shocking, you’ll agree. 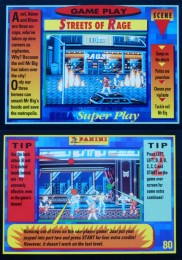 The game cards also featured a tip on the back, but more tips were to be found on the gameplay cards. There were 32 of these, numbered 80-111. The back of the card featured a trio of tips, while the front offered another screenshot, yet another description of the game, plus a strange section down the side labelled ‘scene’.

This seemed to be trying to summarise the game in four stages. Street of Rage, for example: “Gangs on the attack > Police are powerless > Choose your vigilante > Tackle Mr Big”. Basically, a fourth description of the game for some poor sap to come up with.

It’s a neat reflection of Sega’s lack of star characters: only nine of them, and they’re hardly a scintillating bunch. The Kid Chameleon card even admits that he “has only appeared in one Megadrive game so far”. 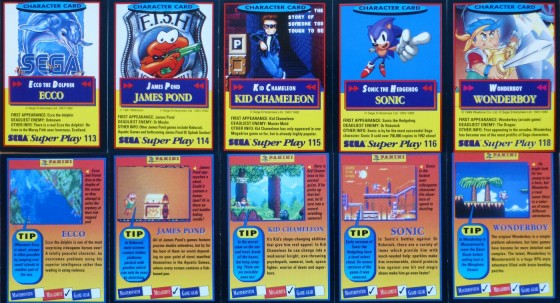 The front of the cards detailed the first appearance, deadliest enemy, and some ‘other info’. The back contained another tip and another description. It was varied stuff, this.

The Ecco character card was clearly the best: the deadliest enemy was unknown, he was described as “one of the most surprising videogame heroes ever!”, and the other info is wonderfully enthusiastic: “There is a real Ecco the dolphin! He lives in the Moray Firth near Inverness, Scotland.”

Though bottlenose dolphins can live for 40 years, sadly the Internet doesn’t immediately reveal whether Scottish Ecco is still alive.