Back in the days when arcade machines were synonymous with gaming rather than gambling, a simple way for developers to see if they had a hit on their hands was to put it on test in a local arcade. If a player died repeatedly yet still continued to put money into the machine it was a very good sign. Sometimes it was even a confounding factor into whether an arcade game went into full production or not.

Some four decades later, the desire to get straight back into a game after dying is still a distinction of quality. Later sections in Rayman Legends are tough, requiring pixel perfect timing, yet we found ourselves trying again and again until we finally got past our proverbial hurdles.

Not once did we feel the need to walk away (read: rage quit) as every level feels as miraculously designed as the last. It also helps that thereâ€™s no â€˜game overâ€™ screen, or even lives for that matter. You can try, try and try again without penalty, and just like in Rayman Origins checkpoint placing remains impeccable.

the more people able to experience this, the better place the world will be

Although originally designed to be manoeuvred with the Wii Uâ€™s GamePad, controlling helper character Murfy with a joypad works surprisingly well. Just one push of the ‘B button’ orders the green hued dude to flick switches, move objects or tickle bad guys into submission. The simplicity of doing so is good thing too, considering that Murfy shows up quite often to lend a hand.

The levels themselves are longer than before and arenâ€™t punctuated as often, which helps incredibly to keep the pace fast flowing. Settings are more imaginative also, including a medieval castle with a wooded grove, a couple of Mexican-influenced worlds featuring rampaging luchadores and super-sized foodstuffs, and a set of trials based in ancient Greece.

We were dreading having to dip into the swimming levels, but even these are surprisingly great – character movement remains fluid and responsive, while the stealth elements added to the underwater sections work far greater than we first imagined. Trust us on that one. 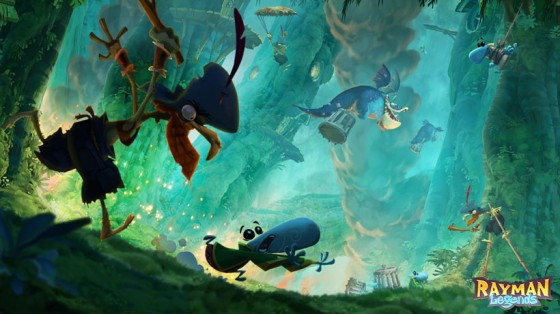 The final level in each world is something of a treat – a musical stage with parodies of renown songs, including Eye of the Tiger and Black Betty. Those with attuned earlobes may spot a few other parodies along the way, including a rendition of the Mission Impossible theme.

Boss battles display further flare, along with a pleasingly â€˜old schoolâ€™ vibe – their attack patterns have to be studied carefully in order to succeed. The majority of these battles are visual highlights, although to be fair itâ€™s an astoundingly beautiful game from start to finish. There’s no doubting that there will be 2D action games on next-gen consoles that wonâ€™t look anywhere near as good as this.

Rest assured that thereâ€™s substance to match that style – itâ€™s hard to think of a recent release thatâ€™s just as generous when it comes to content. The six worlds contain a wealth of hidden areas and to find and every rescue all 700 of the imprisoned Teenies will take weeks, if not longer.

Those who enjoyed the challenging treasure chest missions in Origins will find solace in the extra â€˜Invasionâ€™ modes. These short missions are based in alternative versions of previously completed levels and are set against some very tight, but not impossible, time limits.

Prizes gained by winning scratch cards are also there for the unlocking, including a catalogue full of gormless looking creatures as well as a handful of levels from Origins that have been thrown in for good measure. Weekly and daily online challenges offer further incentive to return, bestowing additional trophies, as well as a curiously addictive 2D football mini-game known as Kung Foot.

This is one generous package, and the fact that it has become a multi-format release shouldnâ€™t be frowned upon – the more people able to experience this, the better place the world will be.

Even Nintendo themselves could learn a thing or two from it. Itâ€™s that good.