If we were handed the Hot Wheels license we would take it down the same path as 2008’s Speed Racer tie-in and create a neon-hued racer with gut-retching tracks full of loop-the-loops and corkscrews. Due to the subject material it would unlikely be a decent substitute for a new F-Zero or WipEout, but it may turn more heads than Worldâ€™s Best Driver did prior to release.

Sadly developers Firebrand Games – who were also responsible for this yearâ€™s Fast & Furious Showdown tie-in – do not share the same vision as us. Instead, they believe that the accolade of becoming the worldâ€™s best driver should be determined by bite-sized challenges lasting around 2 minutes each. The four colour-coded racing teams that feature have their own list of challenges to work through, along with a special ability that only unlocks once enough collectable tokens have been found.

While we canâ€™t knock the game for variety, we can give it a bit of a kicking for consistency

Team Blue are tech-heads, and so their challenges are mostly centred around drifting and precision driving. Team Green on the other hand are natural born racers, with events including time-trials and elimination races. Want to get down and dirty? Team Yellow are your guys, favouring dirt buggies and such which have to be used in mountain climbs. This leaves us with the destructive Team Red, whose opening challenge is motorbike-based. And yes, you can perform wheelies on it.

While we canâ€™t knock the game for variety, we can give it a bit of a kicking for consistency. The difficulty curve is less of a curve and more of a zigzag – some challenges are a total breeze while others can take several attempts. A select few we even had to put off until additional, more powerful, vehicles had been added to the livery. Thankfully itâ€™s possible to swap teams via the main hub when hitting these proverbial brick walls. 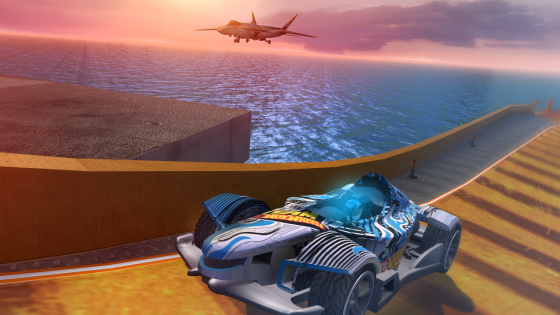 This erratic consistency also applies to the quality of events and the tracks on which they are based. Parachute drag events are surprisingly engaging, requiring the parachute to be deployed and disengaged with split-second precision. Others completely fail to entertain – one of the elimination races is set on a straight and narrow track full of speed boost icons, and as such little input other than holding down the accelerator is required.

Handling too widely varies, from far too sensitive to pleasingly arcade-like, depending on choice of vehicle.

Beyond inconsistency the game has other problems. The motorbike stages are set on elevated rigs full of moving platforms, yet when the bike gets spun around – by either an obstacle or a botched attempt at performing a trick – there is no way to turn the camera around, thus forcing you to then blindly â€œdrive intoâ€ the screen. Why the ability to look around the environments with the right analogue stick has been omitted is beyond us. It would have made hunting for those elusive tokens an easier task, certainly.

The fact that itâ€™s a budget game is also rather apparent. Most vehicles have a boxy, Fiat Panda, look to them while the majority of music tracks sound suspiciously similar to renowned hits. We get the impression that somebody at Firebrand has a soft spot for â€˜David Guetta vs. The Eggâ€™ in particular.

Even the gameâ€™s hub hasnâ€™t had that much thought put into it, comprising of just four dull buildings placed in a circle.

Hot Wheels: Worldâ€™s Best Driver is far from being the worst game of the year – there is a far bit of content here, and the online leaderboards are a welcome extra – but it may very well be the most inconsistent.