The arrival of this hack and slash RPG is timely. With the Xbox One almost upon us, it illustrates just how far XBLA games have come. For the first year or two the download service saw nothing but simple single-screen shooters, retro re-releases and such exciting pursuits as Hardwood Backgammon. With the humble Xbox 360 about to be superseded, weâ€™re now being treated to a free-to-play online RPG that could have easily been passed off as a full price title back when the console was originally released.

Being free-to-play, micro-transactions do unsurprisingly feature. Souls are the in-game currency and even as early on in as the character creation screen the option is there to purchase extra Souls Packs – with prices starting at 240 MSP – in order to buy better equipment to get a head start. That said, the 3,000 souls you start with are enough to buy a decent weapon and one or two pieces of sturdy armour.

After creating your own colossal â€˜Caos Godâ€™ youâ€™re then asked to choose a magic alignment – Dark, Void or Light. Each alignment offers different spells, items and access to alignment-specific dungeons, although you can buy your way into these with a large handful of souls.

Souls do come quite freely, often found in treasure chests and awarded for every kill, but the in-game economy makes Greece look like Dubai as when selling items youâ€™re refunded very little. Items found in treasure chests also are rarely more powerful than the ones already owned, which does hamper the sense of progression and discourages from venturing into the numerous dungeons.

Another discouragement where adventuring is concerned is that weapons and armour have to be repaired using souls, and irritatingly frequently too. At one point weâ€™d completely ran out of currency and so our hapless hero was reduced to running around almost in the nuddy.

Thatâ€™s not to say though that Ascend cannot be enjoyed without having to cough up some cash. Additional purchases such as XP, speed and magic boosts do make some of the boss battles and dungeon crawls a little easier, granted, but thereâ€™s still enjoyment to be had here without ever spending a virtual penny. 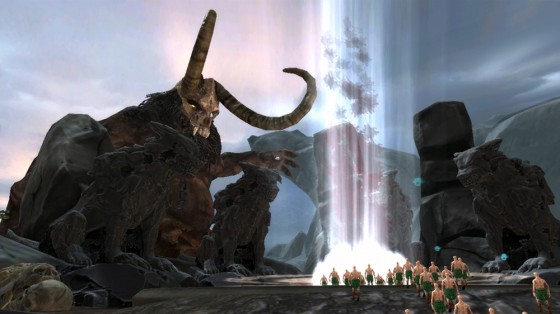 Playing as a giant is novel, for starters. Youâ€™re not the biggest creature to roam the land though – a horned entity known as Titan towers above all, and must be stopped by discovering, locating and then eventually destroying its source of power. In order to achieve this, youâ€™ll need to sway the hearts and minds of the mere mortals that inhabit the world.

From a very early stage developers Signal reveal a rather dark sense of humour. After defeating the waves of beasts troubling the various villages and claiming the citizen’s shrines, they then start to worship you by bowing at your feet. When summoned the humans then clamber onto your giant, ready to launch a barrage of arrows at any enemies that come near. They can also be thrown onto larger enemies where theyâ€™ll cause damage by hacking away while clinging for dear life, and if ever low on health then they can be eaten. As soon as they climb aboard theyâ€™re effectively volunteering to become portable health kits. Now thatâ€™s devotion.

As you travel around the rural landscapes other players can be observed going about their quests. They canâ€™t join you in battle, which thus prevents this from being classed as a full-on MMO, but the ability is there to curse or reward other players via Crusade Spells. These vary from transporting additional enemies into their world to providing temporary health or XP boosts. Again, these spells cost souls. You can bet your life on being cursed often as thereâ€™s an achievement to be had for doing so. We did, however, find this an amusing way to punish those coughing, singing and making other annoying noises into the Xboxâ€™s mic. 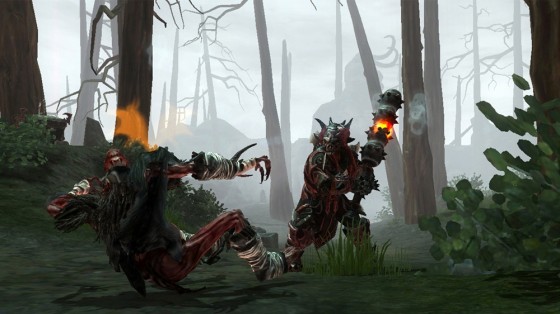 As fun as they sound, ideas such as human tossing and rewarding/cursing other players are sadly undeveloped. As soon as entering one of the linear multi-tiered dungeons not only do the humans youâ€™ve amassed to your aid mysteriously vanish but also all sense of controlling a giant. It doesnâ€™t help either that the dungeons are incredibly simple affairs consisting of small rooms linked via dull narrow corridors. At least the on-screen map is easy to read, clearly indicating treasure chest locations and where to head to next.

The dungeons arenâ€™t the only dull thing to contend with – combat suffers from being far from fancy as well. The X and Y buttons are used to pull off an array of combos while the B button is assigned for magic attacks, of which five can be in the inventory at once. Magic attacks feel very weak and unsatisfying unless upgraded several times with, yes you guessed it, souls. We can live without the lack of flare, but being able to evade attacks by rolling would have improved combat no end, as would have the ability to lock-on bosses and other larger enemies. Itâ€™s possible to dash out of harmâ€™s way, but the button to do so is also used to block, which too feels like inadequately implemented combat feature that canâ€™t be relied on.

There are some neat ideas on display – once they’ve reached a certain level Caos Gods can be â€˜ascendedâ€™ to become AI-controlled pawns who are able to defend previously conquered lands – but the laborious combat, poor variety of enemy types and general lack of polish makes it hard to want to see the story through until the very end.

Nevertheless, it did take 12 hours – or four eveningâ€™s worth of play, if you prefer – until tedium did start to settle. Microsoft will no doubt be pleased to hear that out of all the F2P XBLA games released so far, this is the first that weâ€™ve spent actual money on. Partly because we felt morally obliged to after getting two dozen hours of play for nothing, but also because one of the bosses was giving us a hard time. We guess that makes Ascend a partial success.