Originality isnâ€™t exactly a highpoint in ZootFlyâ€™s latest XBLA title. Itâ€™s a third-person hack and slasher in which the titular Marlow Briggs swings an assortment of super-sized bladed weapons around in a very similar manner to God of Warâ€™s Kratos. Puzzles are mostly of the block shoving variety while during the first level alone there are no less than two gun turret sequences.

At least the plot is slightly fresher, although the few who played Namcoâ€™s often forgotten Splatterhouse reboot may notice some similarities. Marlow Briggs was just an average Joe – a fireman in this case – before a heated argument at an artefact dig site resulted in Marlow being left for dead, slain by an ancient weapon.

With his body left to rot and his girlfriend carted off against her will to decode ancient manuscripts, Marlow is then resurrected by a talking Mayan death mask and bestowed mystical powers and superhuman strength. The mask is angry to discover that his sacred grounds have been destroyed to make way for mines and factories while Marlow didnâ€™t take too kindly to being killed.

Together they traverse ruined trap-laden temples, mountain ranges and rainforests as well as modern day industrial complexes in order to track down Marlowâ€™s girlfriend and the man who ordered him dead. Somewhat ingeniously, many of the Indiana Jones-style temple traps were placed by the mask himself, back when he wasnâ€™t a floating, disembodied, spirit. â€œOh, sorry about this oneâ€ he says to Marlow, as the former fireman dodges giant flaming boulders and leaps over spike covered floors.

Conversation between the two is light-hearted throughout, with the duo often bickering and taunting one another in an amusingly childish manner. The mask is also able to forewarn of dangers ahead and provides a pointer or two during the puzzles that feature once or twice per level. 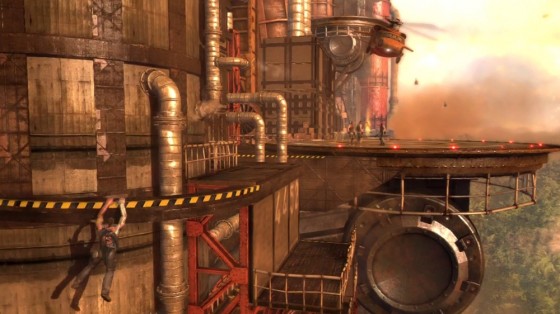 Marlow rarely stays in the same place for long – floors give way, structures topple and giant screen-filling bosses appear when you least expect. It can have you hacking and slashing armoured guards, giant insects and supernatural fiends one minute and then sliding down slippery slopes avoid jagged rocks and endless chasms the next. The variety of situations Marlow finds himself in adds an unprecedented amount of appeal, and the pace is kept fast and frantic from start to finish.

The difficultly curve and checkpoint placing are also both well judged, while 5-6 hour length is justifiable by the Â£9.99 price tag.

New weapons and elemental powers are unlocked frequently, including a set of wide-spanning chained blades that can notch up some very high combos. Some enemies go down easier than others with certain weapons equipped, allowing for a small degree of experimentation.

A few neat ideas help to improve combat further, such as the ability to ride around on the back of a giant scorpion. We actually consider that to be a selling point.

Marlow Briggs and the Mask of Death may not reinvent the wheel, but it does set it on fire, cover it in spikes and send it hurtling through your living room at 100mph. We donâ€™t know what that means exactly, but we do think that you may be surprised by this one. The pleasingly bold and brash execution makes it a very hard game to dislike.