It took just 72 hours for Grand Theft Auto V to make more than $1 billion, recouping its massive development cost many times over and making it the fastest selling console game ever. Youâ€™re probably already playing it, enjoying the expansive world and occasional hooker killing. Which makes a review somewhat irrelevant, but letâ€™s proceed anyway.

Thereâ€™s no denying, Grand Theft Auto V is a wondrous technical achievement. The screaming of the PlayStation 3â€™s fans is testament to that. The systemâ€™s agony is being put to good use though, rendering the city of Los Santos and the surrounding area of San Andreas with an incredible level of fidelity that ensures this generation of consoles go out with a bang (quite possibly literally).

“So much room for activities”

The gameâ€™s world is awesome in scale, packed with virtual life, breathtaking scenery and so much room for activities. San Andreas really is the star of the show. It could quite rightly be called Impressively Big City and Surrounding State Area Simulator 2013, although that might hinder the marketing efforts somewhat.

In pure gameplay terms, not much has really changed since Grand Theft Auto 3 more than a decade ago. You still play as a streetwise thug (this time with three to choose from – ex-con Michael, aspiring criminal Franklin and disturbing psychopath Trevor), stealing cars (the clueâ€™s in the title) and shooting people. Itâ€™s all a bit more refined nowadays, with the impressive character animation and voice acting bringing the proceedings closer to those of a Tarantino movie than ever before, but essentially youâ€™ll still spend most of your time running over pedestrians and shooting gangsters/hookers. 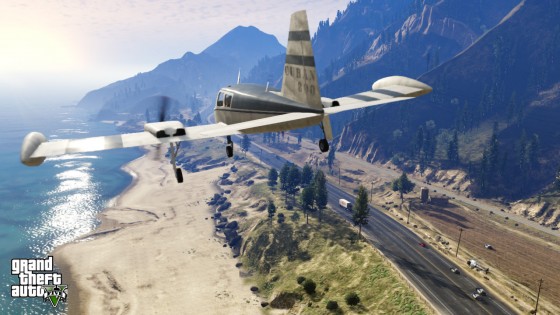 Whilst the main storyline – revolving around the characters pulling off a series of heists – isnâ€™t particularly enthralling, it does make for some entertaining scenes and interesting missions. Michael, Franklin and Trevor arenâ€™t particularly deep or likeable – in fact Trevor is repellent – but the ability to switch between characters at any point provides a refreshing change of perspective. Each character has their own skillset and special abilities, such as Michaelâ€™s â€œbullet timeâ€ shooting or Franklinâ€™s slow motion driving. Switching between characters at key points during missions also means each one is action-packed, allowing you to take control of a character during the most exciting moments.

That the story isnâ€™t first rate isnâ€™t such a drawback. San Andreas is one big criminal sandbox, where itâ€™s easy to make your own fun. Between robberies and shoot-outs you can dabble in the stock market, build a property empire, play a round of golf, go jet skiing, paragliding, mountain biking, fashion shopping, or just steal a plane from the airport. All it needs is an online mode to jack cars with your friends…

Itâ€™s good then that included within GTA V is Grand Theft Auto Online. Whilst not live till October 1st, and thus hard to cover in this review, GTA Online promises to allow 16 players to cohabit a persistent San Andreas. This could be the start of many lost nights. 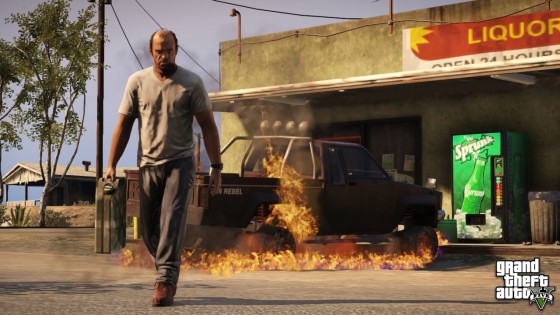 Back to the offline world at hand. GTA V then, whatâ€™s all that about? It doesnâ€™t quite live up to its Hollywood aspirations. The humour hasnâ€™t moved on much since the 90s, and the basic gameplay remains unevolved too. Still, this is every wannabe gangbangerâ€™s wet dream, a refined version of all the previous GTA games that weâ€™ve all been hoping for. Itâ€™s not highbrow, itâ€™s still attention seeking, but itâ€™s just so much fun.

You might lose yourself in San Andreas. You at least owe it to yourself to visit. Yes, itâ€™s still just boys shooting things, but whatâ€™s wrong with that?