Some games force self-discovery onto the player and end up feeling like richer experiences as a result. Dark Souls is a good example, rarely holding your hand and encouraging the player to work things out for themselves. Farming Simulator is another with a steep learning curve, but rather than improve the experience it worsens it, making it clear from the outset that this is a very low budget production.

There is a tutorial on offer, but itâ€™s so badly designed that it ranks amongst the unfriendliest examples weâ€™ve encountered in quite some time. This lead our first hour with the game to be one of frustration as we tried to get our head around the cluttered menus while exploring the farm – of which thereâ€™s a choice of two – in the process.

No matter which you pick they both provide half-a-dozen tools and tractors to start you off with, as well as a field full of crops ready for harvesting.

Our second hour was one of wonderment – the farms are relatively large in size with plenty of opportunity to expand. Beehives, greenhouses, livestock and more can be purchased to make money on the side while the list of farming vehicles and tools to buy is a long one. Itâ€™s also possible to stroll into a nearby town and sell eggs at a farm shop, and to further distract from the grind of farming there are 100 hidden horseshoes to find and collect. 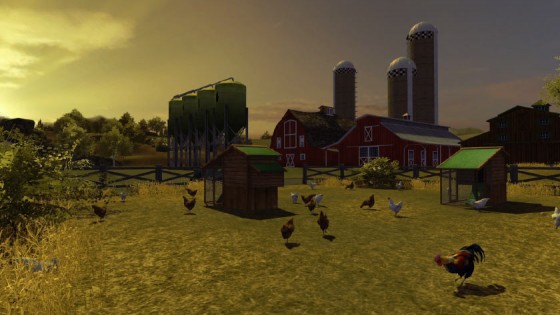 Itâ€™s not hard to imagine that once all the surrounding fields have been purchased with hard earned virtual cash thereâ€™s a sense of fulfilment and satisfaction to be had. Money doesnâ€™t flow freely to begin with though, and the actual farming aspect can only be described as utter tedium. Before you can reap what you sow, the fields have to be cultivated. This requires a tractor with a cultivator attached to be tediously driven up and down the fields in a straight line – a task you can either perform manually or hire a AI-controlled helper to do.

With the soil tilled, seeds have to be sown. Again, this requires a tractor to be painstakingly slowly driven up and down the field. Ruining the whole concept of this being a simulation, the seeds start to sprout within a few minutes and will always grow as long as the ground has been cultivated.

Indeed, realism isn’t exactly a highpoint. The in-game economy is inconsistent as well due to the huge rewards offered by performing random optional challenges. Theyâ€™re random in both senses of the word, such as having to deliver bottles of mineral water to a nearby event or forklift a box of balloons to a childâ€™s party. Quite what a farmer would be doing with a stockpile of balloons is beyond us. Thankfully, the option is there to turn the challenge request prompts off to prevent them becoming an annoyance. 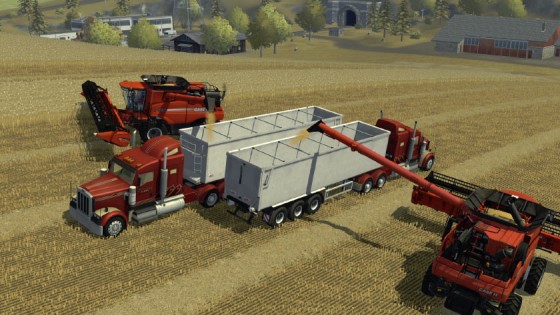 Back to farming: with the crops fully grown, they then have to be harvested with a big and bulky combine harvester. As youâ€™ve no doubt guessed, this again requires a laborious display of driving in a straight line. Once the harvester is full it grinds to a halt and automatically sticks its spout out, ready for the grain to be transferred into a trailer. After collection, itâ€™s then time to decide what to do with the painstakingly collected crop – store it in a silo or sell it. Aside the chance to expand into potato farming, thatâ€™s pretty much the entire game in a nutshell – slowly driving tractors up and down muddy brown fields in straight lines.

You canâ€™t even let the AI take over while you turn attention elsewhere – theyâ€™re so short on intelligence that if two AI-controlled vehicles collide they simply stop on the spot, forcing you to take back manual control and intervene. We once set off three vehicles following behind one another in order to turn a barren field into potential fortune, only to discover that theyâ€™d collided into one another while turning around at the bottom of the field.

Itâ€™s the rudimentary AI routines such as this, along with dozens of other sloppily implemented ideas, that make the whole package feel lazily thrown together. If you could physically see the gameâ€™s code, weâ€™re sure it would be stuck together with bits of bubble gum and pieces of string.

Regular readers will know that weâ€™re all for something a little quirky or different, but this is so shoddily designed and mind-numbingly laborious to play that itâ€™s more of a curio rather than an actual game. Thereâ€™s no wheat here. Only chaff.