Hereâ€™s food for thought – will GTA V harm FIFA 14â€™s sales? The demographic between the two are rather alike, and GTA V is a mighty big game – some may hold off buying anything else until theyâ€™ve finished it.

It has also been said that FIFA 14 wonâ€™t topple FIFA 13â€™s sales figures due to the loom of new consoles on the horizon. It will no doubt sell very well though, and review scores suggest that it deserves to.

Eurogamer put an 8/10 in the back of EAâ€™s net: â€œYou could argue that FIFA 14 shows EA Sports is running out of ideas [then], but for me this is a developer that knows exactly what it’s doing. Neither the football match engine nor Ultimate Team were broken in any major way, and the placebo effect of a suite of control and balance tweaks, along with its increasingly snug ties to the drama of real-life football, will be enough to carry its ever-growing audience of players through the next season.â€

IGN meanwhile were slightly more praiseworthy, giving it a 9.0: â€œFIFA 14 isnâ€™t a major landmark for the series in terms of innovation. Unlike recent iterations, it doesnâ€™t ask you to relearn key skills. But the changes have made FIFA more attacking, fun, welcoming, and attractive, and ultimately itâ€™s a stronger experienceâ€. They did however point out that PES 2014 still has the upperhand on passing.

Then thereâ€™s GamesRadarâ€™s 3.5/5 review: â€œFIFA 14’s a great game – of course it is -but the series seems too big and bloated now to make any substantial changes. FIFA 14 requires more patience than most of its predecessors, and even when your patience is rewarded, it often feels like it’s flattering to deceive. Slow and stodgy in midfield but dynamic and physical at either end of the pitch, it’s possible that some might think this the best FIFA ever – but you’d be splitting hairs, not defences.â€ 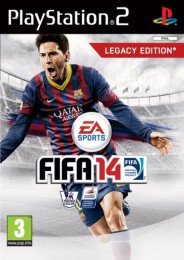 As always, the list of formats itâ€™s on is a long one – PlayStation 3, PlayStation 2, PSP, PS Vita, Xbox 360, Wii, 3DS and PC. If you can wait, Xbox One and PlayStation 4 versions are also lined up for launch day – November 21th and 29th respectively, if your mind needs a jog.

Also bear in mind that the PlayStation 2, PSP, PS Vita, Wii and 3DS versions are, for a second year running, simple kit and stat updates with no major changes. EA received a kicking about this last year, and so this year these versions now have â€˜Legacy Editionâ€™ on the cover to avoid another potential backlash.

The rest of this weekâ€™s releases are a surprisingly hardcore assortment – Disgaea D2: A Brighter Darkness on PS3, Armoured Core: Verdict Day on both PS3 and 360 and the paring of Inazuma Eleven â€“ Lightning Bolt/Bomb Blast for 3DS.

The embargo for Armoured Core: Verdict Day lifted Tuesday night. â€œVerdict Day is more than just a marked improvement over Armored Core 5â€œ said Eurogamer who gave it an 8/10.

The Official PlayStation Magazine didnâ€™t quite find as much to enjoy in the giant stompy robot simulator, giving it a 6/10. â€œDeliberately low on story but high on detail, Verdict Day is one for the (armored) hardcore,â€ was their final verdict.

There are only a few reviews of Disgaea D2: A Brighter Darkness knocking about at the moment. Thankfully for fans of the tactical RPG, most of those are favourable. NowGamer dished out an 8.0, reporting that although not quite as good as Hour of Darkness thereâ€™s still potentially months of enjoyment to be had. GamesRadarâ€™s review also suggests that thereâ€™s hundreds of hours of play on offer.

Inazuma Eleven: Lightning Bolt/Bomb Blast – which have slightly different side-stories from one another – are worthy of attention too, if Nintendo Lifeâ€™s 7/10 review is to go by. They enjoyed the light-hearted soccer RPG, claiming that â€œInazuma Eleven 3 delivers most of what made the first two titles on DS such excellent RPG gems that are suitable for almost any age.”

Disney are re-releasing a handful of older Star Wars games this week too, including the previously hard to find Star Wars Unleashed: The Ultimate Sith Edition. That and LEGO Star Wars III Clone Wars, LEGO Star Wars: The Complete Saga and Star Wars: Force Unleashed II are now (re)available for Â£11-odd each on Amazon.

Over on the download services the Xbox 360 receives the rather odd pairing of the free-to-play RPG Ascend: Hand of Kul from Toy Soldiers developers Signal Studios and Girl Fight from the brainchilds behind Ubisoftâ€™s recent Spartacus Legends. Imagine a western-developed version of Dead or Alive. Congratulations – you’ve just imagined Girl Fight.

Aside a bunch of retail releases making their way to the 3DS eShop – like FIFA 14 for a staggering Â£39.99 – itâ€™s a relatively quiet week for Nintendo downloads, with just educational thing Happy Circus being the only new release. There are a few Virtual Console re-releases though – Milonâ€™s Secret Castle on 3DS for Â£3.59, along with Zelda II: The Adventure of Link and Gradius on Wii U for Â£3.49 a pop.