It would seem that movie tie-ins have a new home in the form of the App Store. Given that theyâ€™ve always had a cheap and throwaway feel to them, this suits us just fine. 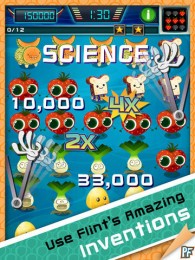 To be fair, this match-three puzzler doesnâ€™t look all that cheap. Itâ€™s as colourful as you may expect for a game based around foodstuff, while the artwork remains faithful to the source material.

It certainly does feel throwaway though – a match-three puzzler where rarely do you match-three. The colourful critters – the movieâ€™s Foodimals, no less – often arrive in clumps of six or sometimes even more. Starting with the playing field half-full with characters of the same type isnâ€™t uncommon either.

This does make the sixty second matches very fast paced – the screen is restocked with Foodimals to free as quickly as you can match them – but it also makes the game feel about as satisfying as eating a rice cracker.

In Bejewelled, amongst others, matching 5 or more shapes at once feels like an accomplishment as it isnâ€™t something achievable that often. Here, matching several objects at once is such a common sight, no thanks to the gameâ€™s simplistic nature, that the whole thing feels rather pointless.

Luck plays a huge part as well. Each match stumps up a challenge, with one early example being to match up 10 bug-eyed berries during one game. Because the Foodimals arrive in random formations it took us around half-a-dozen attempts to get 10 near one another. 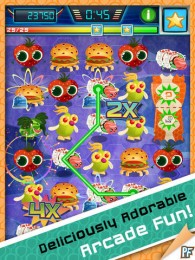 This wouldnâ€™t have been an issue if every attempt didnâ€™t use up one of Flint Lockwoodâ€™s batteries – one of the in-game currencies. These batteries are supposedly what Flintâ€™s machine requires in order to free the Foodimals, and have a recharge period of 20 minutes or so. If you donâ€™t want to wait, you have to cough up 69p.

The same goes for the stars that are gained for beating challenges, which are then used to unlock new levels. At Â£1.49 these are slightly more expensive. We didnâ€™t have enough to face the first boss, and so we were hit with a choice – pay up or revisit the first few levels again. Grind, basically.

The whole â€˜itâ€™s for kids who donâ€™t know any betterâ€™ mindset doesnâ€™t wash here – handing this to a child to keep them quiet would be like handing them a 10 piece jigsaw puzzle and then wondering why theyâ€™re bored of it mere minutes later.

These meatballs have been crushed by candy.