Even with a much improved assortment of games on the shelves, compiling a list of hidden gems for the 3DS still provides a sizeable challenge. Sega’s Rhythm Thief and The Emperor’s Treasure is certainly deserving of that status though. 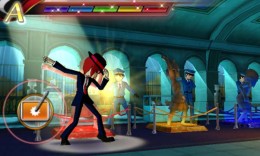 Raphael just so happens to have a rather unassuming alter ego – Phantom R, a light footed thief who follows in the footsteps of his father.

Rest assured that Phantom R is no hardened criminal mastermind – he’s simply out to uncover his father’s whereabouts, which by chance involves following various clues placed in such places as The Louvre, Champs-Ã‰lysÃ©es and eventually the Eiffel Tower. Naturally, these locations are far easier to snoop around at night, even with the odd guard or two present. 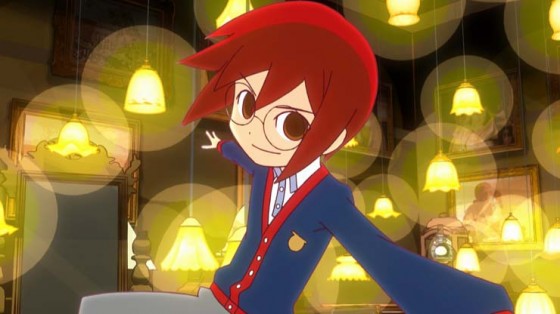 The six-or-so hour long story flows superbly, adding a love interest and digging up a childhood rivalry in the process. Smartly animated anime cut-scenes are surprisingly frequent and a genuine highlight – especially when viewed in 3D – while the toe-tapping music made us want to thank Nintendo personally for improving the speaker quality of the 3DS over that of the DS. We almost feel sorry for potential 2DS owners, with their mono-speaker and lack of stereoscopic screen. 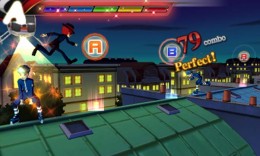 Music, as the game’s name suggests, is the focus. Sneaking into buildings, beating up bad guys and even a spot of cooking are source material for some of the rhythm action sections – which require some very timely swipes of the touch screen – while one optional challenge pays homage to Sega’s Samba de Amigo. Sometimes it can take a few attempts to get into rhythm, but when you do finally get into the groove clocking up some high-ranking combos can be rather satisfying.

Later on Fondue even gets his own time to shine, via a bum-biting mini-game. Amusingly, the larger enemies have to be bitten for a longer period of time. Presumably this is down to them having an extra layer of fat to chomp through.

When not carefully tapping and swiping to the beat, the rest of your time is spent exploring modern day Paris to track down leads and solve a few Professor Layton-esque puzzles. Most are simple memory tests, such as pressing buttons in the correct order or trying to work out patterns of shapes and sounds. Although they don’t flex the grey muscle much, they do provide a welcome change of pace.

Raphael also carries a device that can record sounds which has to be used to progress on several occasions. A yellow-bellied police officer makes an appearance a few times and has to be scared off by recording and playing back various disturbing sound-effects. There’s also a librarian to sent to sleep with a lullaby, thus allowing Raphael to sneak into the library’s restricted area, and a baby to quieten by recording the sound of a rattle. 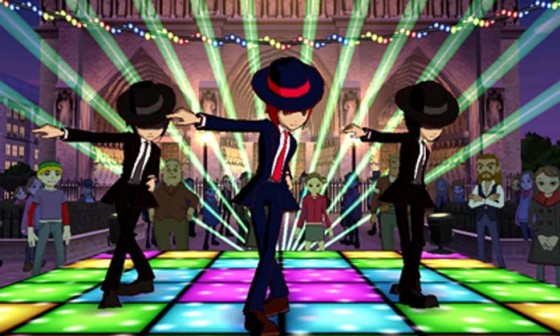 You never have to trek too far to find these sound effects as objectives and the location(s) to visit next are displayed clearly on colourful 3D map. Another thoughtful touch is that whenever returning to the game there’s a brief recap from where you left off to bring you up to speed. 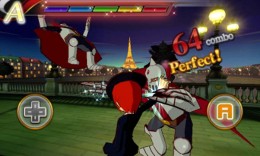 Should you hold the same sense of rhythm as your dad dancing at a wedding disco, medals found in the nicely drawn 2D backdrops can be used to buy temporary power-ups that assist during the rhythm action sequences

We didn’t discover these power-ups until reaching a massively irritating hang-gliding mini-game towards the end, during which they proved most helpful no thanks to some sloppily implemented tilt controls. Said mini-game is the only real blight on an otherwise whimsical game.

Rhythm Thief may only be a year-and-a-bit old, but Sega certainly doesn’t make them like this any more. Really, they don’t – it’s all Football Manager, Total War and Sonic on a skateboard nowadays.