When Rare originally designed the Xbox Live Avatars we don’t think they realised just how diverse they would become.

Our first game of poker online wasn’t just against some lads and lasses in suits and fancy hats but also the gingerbread man from Shrek and Batman’s nemesis Bane. Let it be known to all that Bane has a poker face beyond compare.

As you’ve no doubt guessed by now, good old poker played via Xbox Avatars is what this free-to-play XBLA title offers.

The ‘World Series of Poker’ license holders are something of an ambassador for the gambling world so it shouldn’t come as a surprise to learn that all the fundamentals are present and correct. Developers Foundation 9 have even gone beyond the call of duty to include a single-player option, known here as a practice mode.

That title is selling itself slightly short – there’s a long list of poker pros to beat, as well as tournaments to partake. If your poker skills are rusty – or even non-existent – then worry not as there are a few handy tutorials too.

Due to practice mode providing an endless supply of chips, it’s not until diving into the depths of online play that you have to keep an eye on your grand total. New stacks are added to your account every 12 hours, and there are also hourly specials on unlockables that bestow temporary XP boosts.

If you’re down on chips and don’t feel like waiting, an option is there to buy gold bars – a second in-game currency – which are used to buy chips. Prices start at 400 MSP – why the cost of these extras hasn’t been changed to local currency yet we arenâ€™t sure. 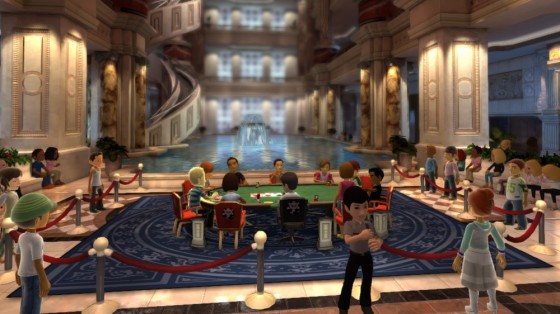 Considering it’s free-to-play, micro-transactions were always going to feature. Thankfully they aren’t intrusive in the slightest, and the free chips are sufficient enough to see you through several games if used sparingly.

With the fundamentals in place it’s up to the extras to leave that lasting impression. The wealth of extras to purchase in particular is noteworthy, including new felts, stack formations, decks, chairs, avatar costumes and also single-use items such as a round of drinks for the table.

The majority of unlockables don’t come cheap, requiring a hefty amount of chips. An achievement can be had by buying a sirloin steak while sat at a million chip entry table, which we’d wager would take a weeks’ worth of winnings to purchase. Still, as achievements go that has to be one of the more imaginative ones around.

Another idea we’re fond of is the ability to unlock chip tricks, which are then pulled off by pressing a combination of buttons – like in a beat’em up – while sat at the table waiting for your turn. It’s also possible to bluff by making your avatar act in a calm manner when it’s their go.

The XP system is well designed too, awarding extra amounts for winning streaks and also for using good judgement when it comes to choosing to fold or continue.

As console-based F2P games go, this is an appealing package that’s surprisingly comprehensive. It doesn’t nag with the in-game purchases, and the wait for a new supply of chips doesn’t restrict enjoyment. The only major downside is that there are a few issues with the screen stuttering and freezing, which can more than likely be attributed to the game still being in â€˜betaâ€™ stage. Cheekily, this is only casually mentioned on the title screen and isnâ€™t mentioned in the product description at all.

Even with a few teething issues, which will hopefully be resolved sooner rather than later, for newcomers and experienced poker players alike this stands as a recommended download. As the latter will no doubt testify, poker is a genuinely brilliant card game that’s incredibly easy to pick up. And if we do end up seeing you at the millionaire’s table, we’d like our steak well done please.