When a game has been stuck in development there are usually some rather blatant signs to indicate things havenâ€™t gone smoothly. Weâ€™re talking dated visuals, shoddily implemented ideas and various inconsistencies that suggest content has been hastily removed.

Remarkably, The Bureau – which was initially conceived back in 2010 as an FPS known simply as XCOM – has survived its long gestation period to emerge as not just a good looking third-person shooter, but also one that feels pleasingly solid. Whether it deserves to be associated with the XCOM brand is another matter entirely though.

Whereas most shooters get off with a proverbial display of fireworks, inciting you with fast-paced cut-scenes and set-pieces intended to thrill, The Bureau is more like a candle, burning away slowly.

2K Marin have at least tried their hardest to draw you in from the outset by showing off some of the tactics essential to your teamâ€™s survival, but things don’t really get going until after your team has levelled up a few times and gained additional skills. The fact that gruff-sounding protagonist agent William Carter starts with a minuscule health-bar causes the game to get off to a frustrating start too, forcing you to learn how important it is to stay behind cover the hard way.

The story is set in 1962 and takes place during an alien invasion. Due to being vastly overpowered the US army has had to learn how to adapt the alien’s weapons for human use so that that the alien’s technology can be used against them.

These alien invaders – known as Outsiders – arenâ€™t just here to cause wanton carnage, but also to turn Earth into a new homeworld. They spare no time colonising the planet, dropping giant metal structures from the sky to turn the quaint ’60s American towns into factories and fortresses.

Their plans for world domination donâ€™t end there – the Outsiders have started to transform innocent people into brainless drones, referred to by the XCOM scientists as ‘Sleepwalkers’. Their plans for these former citizens aren’t uncovered until later on. Much later, in fact – by the time the story starts to draw to a close it improves tenfold, escaping the typical sci-fi schlock to become something far greater than the first few hours led us to believe we were in for. It also helps that the voice-acting is up to 2Kâ€™s strong standards.

The visual style is another draw – neon-hued plasma blasts illuminate the shiny chrome exteriors of the alien surroundings in a manner that would make Bungie jealous, while controlling FBI agents dressed in smart suits and fedoras makes a welcome change to burly space marines. 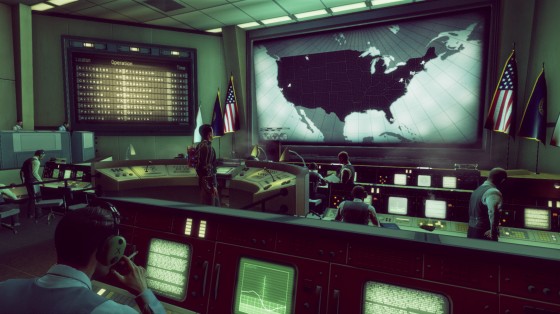 The rather sizeable XCOM HQ acts as a hub between missions, and itâ€™s from here that agents can be hired, fired and kitted out in various attire. Like XCOM: Enemy Unknown, agents can be given (potentially hilarious) names of your own choosing. When they die in battle theyâ€™re also gone for good. Thankfully when it comes to healing the AI is decent enough to act promptly, and when not under your instruction your two fellow agents wisely stick close by rather than running directly into trouble.

Itâ€™s also from the HQ that additional missions can be acquired by talking to various personnel. Inventively, not every mission requires your involvement – dispatch missions take place behind the scenes by hand-picked agents. Upon success theyâ€™ll gain experience points and will occasionally return with a new backpack that provides a combat-focused perk. Minor missions are optional too, but to raise Carter all the way up to lofty level 10 – thus unlock all available skills – youâ€™ll need to play through every single mission thrown your way.

Minor missions take around 20 minutes each and mostly entail placing bombs in alien structures or saving the harmless Sleepwalkers from alien prisons. The main missions, in comparison, tend to take over an hour. Most of these start on American soil – complete with typical ’60s American diners, gas stations, shopping parades and other nostalgic sights – before heading into alien territory.

Similar to Mass Effect’s combat wheel, a press of a button during combat brings up a ‘Battle Focus’ view of the environment. From here enemy locations are visible, along with a percentage showing the potential amount of damage a direct hit can cause. Flanking the opposition causes considerably higher amounts of damage, while laser and plasma weapons can take down mechanical enemies and drain shields in seconds.

Combat demands more brainpower than most shooters do

It’s also from the ‘Battle Focus’ view that agents can be instructed to put their skills to use.

Five different classes of agent can be taken into battle, varying from engineers that can place mines and turrets, to support soldiers who can summon shields, issue combat stims and more. After experimenting with each agent class we found ourselves sticking with the same two agents from thereon in, mostly because the classes are slightly unbalanced. Why use a taunt skill to bring enemies out of hiding when Carter can elevate foes from the ground like something out of Star Wars? Quite.

We suppose we should be grateful that combat has been designed around experimentation – each agent class, as well as Carter himself, has a branching skill tree that prompts you to choose what skills to unlock. Some skills can provide extra support in battle – such as drones with healing beams – while other unlockable skills can bolster weapon damage or equip said drones with missiles. Finding a decent mixture of support and oppressive force takes a little time. 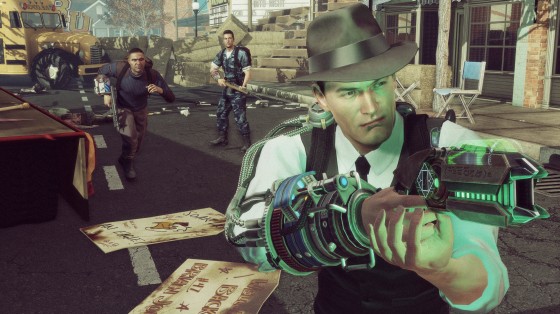 The tactical elements may not be particularly deep, but they feel well implemented regardless and the AI always does as instructed. For all the skill sets and character customisation options on offer though, we still rolled our eyes when faced with done-to-death armoured units that can only be attacked from behind.

Combat demands more brainpower than most shooters do (hello, Army of Two and Fuse) but never does it become a battle of wits between you and the enemy. This is mostly because gunfights tend to unfold in an identical manner – a few grunts to get you going, followed by an assault of armoured aliens and maybe a sniper or two. Towards the end of the game in particular things become quite monotonous, throwing heavy unit after heavy unit your way.

As mentioned in the opening paragraphs, The Bureau could have turned out a total disaster. Instead, 2K Marin has been able to turn the title around into something thatâ€™s more than passable – a stylish shooter that doesnâ€™t do anything fatally wrong apart from finding itself walking down a very well-trodden path. Depending on how you look at it, you could even see this as being the best case scenario.