Due to the fact that there are three PlayStation 3-exclusives out this week, the spotlight is squarely on Sony for this new release round-up.

Good news if youâ€™re strapped for cash at the moment – or possibly saving money for next weekâ€™s GTA V – as two of these exclusives can be found for under Â£25 online.

The notoriously cumbersome Gummi Ship aside, VentureBeat found much to praise.

They awarded it 90%, claiming that â€œKingdom Hearts 1.5 HD Remix offers old fans a great excuse to play some of the seriesâ€™ older installments while also giving curious newcomers the best way to get their first fix.â€

IGN also felt that it was one of the better HD updates around, giving it an 8.5 and calling it a â€œgreat toon upâ€.

If hanging with Goofy and his fellow animal cohorts doesnâ€™t sound like your cup of tea, you could always hang with Sony’s 2D side-scoller Puppeteer.

For all the dazzling lighting effects the game offers, it would seem that Sony struggled with the fundamentals. â€œFor every clever touch, thereâ€™s a shrieking piece of dialogue talking over key narration; for every cute visual gag, thereâ€™s a twitch bit of platforming that Puppeteerâ€™s mechanics arenâ€™t suited to handleâ€ said Polygon in their 6/10 review.

EDGE liked it slightly more, giving it a 7: â€œYouâ€™ll smile at how Japan Studio reimagines the typical platforming trampoline â€“ springy bonsai trees in a Chinese-themed stage, bellies of snoozing, reclining yetis in the obligatory snow level â€“ but these flourishes never fully stop the bombing, hookshotting and pit-leaping from feeling overfamiliar and underinspire.â€ 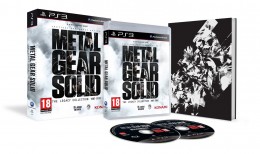 And now weâ€™re back to old games in new clothes, with Konamiâ€™s Metal Gear Solid: The Legacy Collection.

Available for around Â£35 online, itâ€™s something of a bargain. At least for those who donâ€™t already own the MGS HD Collection, anyway.

EAâ€™s NHL 14 hits the rink this week as well – and it’s the only Xbox 360 game arriving at retail – while on the humble Wii thereâ€™s Big Time Rush: Dance Party which is based on some Nickelodeon thing.

As for downloads, the Xbox 360 is playing a rare game of catch-up with DuckTales: Remastered – a game that received mixed reviews on other formats – as is the Wii U with Capcomâ€™s 2D hack ‘n’ slasher Dungeons & Dragons: Chronicles of Mystara.

Then on PS Vita thereâ€™s Sparkle, a game that looks rather like Zuma. Actually, it looks a lot like Zumba. That’s not exactly a bad thing, to be fair – the PS Vita could do with a few more puzzlers in its library.