We hope that thereâ€™s nobody out there shallow enough to judge Payday 2 by its rough appearance alone. Then again, it wouldnâ€™t entirely be a bad thing – the fewer idiots playing this co-op shooter online the better.

Those rough looks hark back to its download-only predecessor, but now backed with a slightly bigger budget and a wealth of new content this sequel has evolved into a retail release. For the Â£24.99 – or thereabouts – asking price, the graphical and few technical problems it has are very easy to overlook.

Requiring planning, patience and a degree of cunning, Payday 2 is one of the most refreshingly different shooters of recent times. It demands your attention constantly, and when things get going itâ€™s also one of the most enthralling. Making the final run to the getaway van with a loot bag on your back and only a slither of health is almost guaranteed to get your pulse racing.

As we said in the opening paragraph, no good comes of having an idiot on your team. The focus is squarely on teamwork – you and three others must carry out various heists, ranging from bank jobs to sneaking into a museum at night and making off with precious artworks. Some missions are multi-tiered with numerous objectives set in more than one location, while assets such as inside men help to get the job done quicker. Well, potentially anyway.

one of the most refreshingly different shooters of recent times

AI-controlled law enforcers provide something to shoot at. Easily defeated security guards are usually present on the scene when you arrive, soon followed by police, snipers and ex-military soldiers clutching riot shields. Theyâ€™re a clever bunch, often choosing to attack from afar and occasionally throwing smoke grenades in your direction. When they do choose to swarm on your position, you can expect them to do so in great number. And only then does going in all guns blazing become a viable option.

At the start of the majority of missions itâ€™s possible to scope the surroundings, looking for alternative entry points and noting where the CCTV cameras are. Once a colourful clown mask has been donned though, thereâ€™s no going back: guns are drawn and panic soon follows. Citizens are a bigger problem than you may think, sometimes fleeing in terror and alerting the police to your presence. Fortunately they can be forced to the ground and have their hands tied to prevent such a thing from happening, although you do then face the possibility of a hostage rescue team arriving. 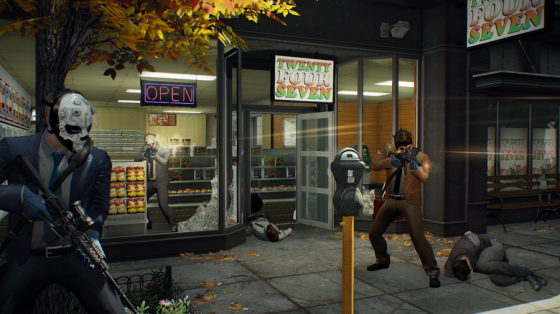 Itâ€™s during the first few minutes of a mission that playing with a microphone can be a huge benefit, giving the chance to plan assaults with fellow partners in crime. Communication isnâ€™t essential to succeed – we managed to finish several missions with a bunch of unsociable types – but it certainly does improve chances of survival and by cooperating with others you may very well end up making away with more loot.

It also helps to have a balanced team. Four character types are available, each with a unique core skill. One member can deploy trip mines, for instance, while another can drop an invaluable doctorâ€™s bag to patch up the wounded. Later come sentry turrets, a portable saw that can be used to hijack cash machines and various other tools of the trade.

Characters rise up the ranks relatively quickly, and the skill trees have been designed to accommodate this – there are plenty of passive upgrades to unlock, such as those that make aiming quicker or reduce chances of having drills break down when trying to crack open a safe. Loot meanwhile can be used to purchase new weapons and accessories, along with new masks.

Incidentally, loot locations are randomised – a neat idea that prevents missions from coming predictable too soon.

The whole package is held together by a faux crime syndicate network known as Crime.net. Visiting this constantly updated area map shows a list of possible heists and crimes in progress. There are still lobbies to wait in, but itâ€™s a much slicker and smoother way of doing things overall. A reasonably large safe house meanwhile acts as a training facility as well as a place to store your ill-gotten gains.

Itâ€™s easy to get the impression that the single-player mode was added against the developerâ€™s will, simply because publisher 505 Games demanded such a thing. Playing all by your lonesome really isnâ€™t what the game is about and the rudimentary AI of your cohorts enforces this further. If anything, the single-player mode is only good for learning level layouts. As harsh as it sounds, if you bought this with no intention to play online then you deserve to be lumbered with the cack-handed AI.

A co-operative experience like no other, Payday 2 offers thrills and excitement way beyond many of its first person shooter peers. Play it with three others keen to scheme and it shines brighter still.

You canâ€™t help but to think though that Overkill has still only touched the tip of the iceberg of the franchiseâ€™s potential. Indeed, weâ€™re already giddy thinking about what a possible sequel with a far greater budget, and a slicker game engine, could bring.

Buy Payday 2 and make that happen.