With Microsoft’s announcement yesterday, we finally know when and where Xbox One and PlayStation 4 will launch this November. So let’s have a look at the world according to Microsoft and Sony. 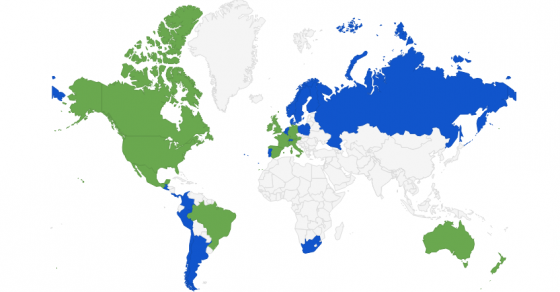 Sony have yet to announce anything about Asia, but it would be surprising if Japan didn’t get a November launch. It’s been suggested that the Tokyo Game Show later this month might bring news.

The reason that Microsoft dropped eight of their originally intended 21 launch territories was language complications with the enhanced Kinect voice control.

There’s certainly an argument there. Denmark, Finland, Netherlands, Norway, Russia and Sweden all have their own languages; Belgium and Switzerland have three and four official languages respectively. From the point of view of an American mega-corporation, Europe is terribly fiddly.

But now three of the launch territories won’t support voice control at launch, and only five will support the ‘Xbox On’ command. So why not launch, albeit without voice control, in the eight territories they dropped? Sony are managing to do that – and more.

Of course, multinational corporations can do what they like. But there could be some disgruntled nations of gamers out there. Portugal, for example – Xbox One is launching in Portuguese-speaking Brazil this year, but not Portugal. Or many of the Spanish-speaking Latin American countries – of those, only Mexico is deemed worthy of Xbox One this year. Spanish in one country isn’t necessarily the same as Spanish over the border – especially the spoken word – but again, Sony are managing it.

So for some, it’ll come down to that: PlayStation 4 is available, Xbox One isn’t – decision made.

But the reality is that the launch period is just that. The success or otherwise of each console will be determined over many years to come, not by the relative handful of early adopters in the last couple of months of 2013.

Still, any excuse to make a nice map.