Weâ€™ll probably never know precisely how much money Disney has invested into their assault on Activisionâ€™s Skylanders franchise, but rumour has it that the figure is approaching $100m. Even in this day and age of big budget videogames thatâ€™s an astonishing amount. With such a colossal outlay we wouldnâ€™t be surprised to learn that a sequel is already under way.

Our more cynical side tends to sneer in the direction of sequels, but this is a game that we hope receives one.

Not so much because we were left wanting more – although we would have liked to have seen a Wreck It Ralph playset – but in the sense that Disney Infinity only treats us to passing glimpses of its full potential. In other words, itâ€™s constantly good but only occasionally hits true greatness.

Considering that the starter pack will set you back in the region of Â£60, which provides the fundamentals to get started with and little more, we expected that much celebrated â€˜Disney magicâ€™ to be on display from start to finish. 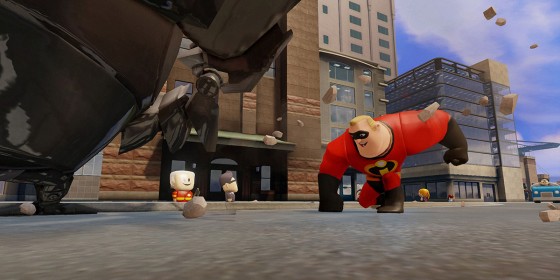 The starter pack contains plastic iterations of Mr. Incredible, Jack Sparrow and Sulley, along with the figure portal and a randomly selected power disc. The toys themselves are very well made, and the additional figures look greater still. Jack Skeleton, Wreck It Ralph and Sorcerer’s Apprentice Mickey are notable upcoming highlights.

Although the included figures may sound like a peculiar trio, they have been bundled for good reason – the three 4-5 hour long campaigns that are playable ‘out of the box’ are based upon The Incredibles, Pirates of the Caribbean and Monsters University.

Those hoping to rally around the Cars universe or explore the Wild West with The Lone Ranger have to shell out for those respective playsets, priced at a slightly eyebrow raising Â£30 each.

the ability to create racetracks holds more appeal than we envisioned

It was The Incredibles playset that we first experienced, and because itâ€™s the poorest of the three our initial impression wasnâ€™t quite as positive as it could have been.

Set in moderately large city, the task at hand is to uncover the plans of the superhero familyâ€™s nemesis Syndrome by taking on various missions that eventually build up to a rooftop battle with the flame-haired fellow.

This playset features the small Duplo-style characters who inhabited Toy Story 3â€™s Toy Box mode – a distant predecessor of sorts to Disney Infinity – and like in that game the block-headed citizens can be drop-kicked great distances in an amusing manner. This simple yet pleasing mechanic is used for several mission objectives, including one where various escaped zoo animals have to be rounded up and booted back into their enclosure. 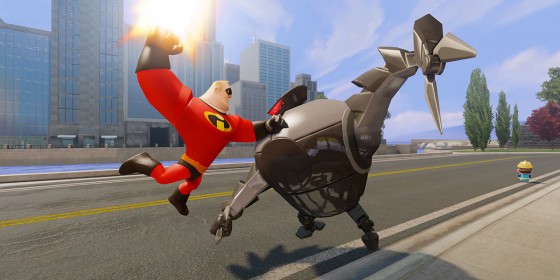 Other objectives include some police escort missions, and much later on the chance to blast some of Syndromeâ€™s mechanical menaces with a missile-equipped helicopter. No matter what mission youâ€™re on, Syndromeâ€™s robots constantly appear in the city, crash landing out of the sky. Stopping to fight them eventually becomes tedious, a fact not helped by the simplistic combat that’s not nuanced in the slightest.

Itâ€™s not hard to get the impression that this campaign was the last to be included – the city is pretty sterile looking, almost featureless in places, and some of the missions feel long and drawn out. A good example is the one where the robotic remains from four mysterious metal pods have to be painstakingly carried back to The Incredibles’ HQ. A customisable HQ, no less. Another one of the few nice touches is the ability to recruit random, nameless superheroes who help out during battle.

After learning new fighting moves, researching Syndromeâ€™s tech and locking away a trio of other villains the final battle is something of an anti-climax with an ending that’s a slightly disappointing â€˜blink and youâ€™ll miss itâ€™ affair. The same goes for the endings for the other two playsets, sadly. 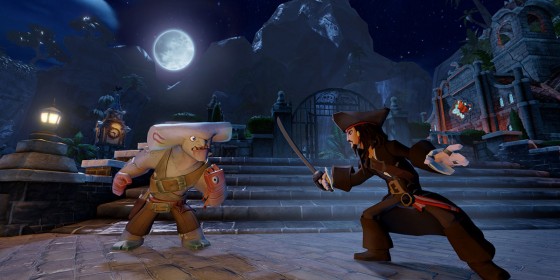 The Pirates of the Caribbean playset is the most ambitious of the three, and subsequently engages the most. We even wished that it lasted beyond the four hours that it takes.

Here, Jack Sparrow finds himself sans ship on a small pirate cove. After giving the local townsfolk a hand and finding a few hidden treasure chests a customisable ship can be purchased, along with various cannons, improved sails and more.

Taking to the high seas is one of the game’s highlights as there’s a sense of freedom not found in the other playsets.

It’s a visual highlight also – the water effects are alluring, the ship is impressively detailed and the way that the sky turns from bright blue to a sordid shade of grey when an enemy ship approaches is a nice touch. Naval battles are rather satisfying due to the ability to â€˜charge up’ the cannons and fire dozens of shots at once, causing significant damage in one blast. The ability to summon mystical powers from ancient relics add another touch of depth to the combat, albeit only slight.

Although there is a story to see through to the end – which entails tracking down the scattered parts of an ancient relic before Davy Jones reaches them – for most part youâ€™re able to explore the various islands dotted around at your own pace. Itâ€™s possible to have more than one mission on the go at once, which is always a boon.

Plastic Jack Sparrow isn’t quite as endearing as the real deal, only blurting out his catchphrases every now and then and acting less flamboyant, but the amount of thought that has gone into this playset is apparent from start to finish. 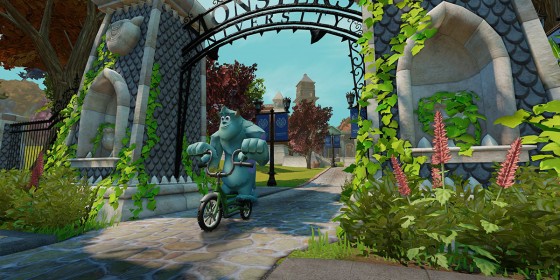 This leaves us with Monsters University – the only other playset playable available from the outset. The non-violent nature of the two Monsters Inc movies has really works in the game’s favour, having seemingly forced the developers to think of some creative mission objectives that don’t have a focus on combat. A fine job has been also been done making the university setting feel alive – all kinds of weird and wonderful creatures can be found strolling around campus, clutching stereos, piles of books, and other student paraphernalia.

The opening mission is to clean up the campus following an attack from rival uni Scare Tech. By definition of attack, we mean that the trees have been covered in toilet roll, while inoffensive posters have been stuck on the walls. Later thereâ€™s a paintball match to partake, along with the chance to pull off some stunts while riding a BMX. 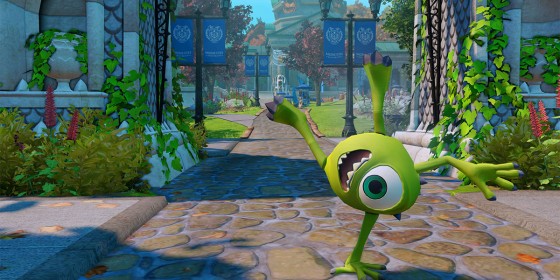 Itâ€™s good clean fun, just like something from â€˜the house of mouseâ€™ should be. The setting looks the part too, full of detail and vibrancy. In fact, the whole package has a neat stylised look – the characters are rather angular in design, with most of the males sporting rippling abs and chiseled jaws. Mike Wazowski is an exception, of course.

All three campaigns are accessed either by putting the corresponding playset piece on the portal or via the much talked about Toy Box mode. Only a lazy journalist would compare this mode to Minecraft, although admittedly there are a few similarities. At the start youâ€™re presented with a pre-built Toy Box that features Cinderellaâ€™s castle in the middle, and after learning the basics, the option to start a new sandbox from scratch opens up.

Toys, building blocks, townfolk and structures can be placed into this blank canvas and painted with textures to create whatever your mind can muster. As the saying goes, the only limit is your imagination. 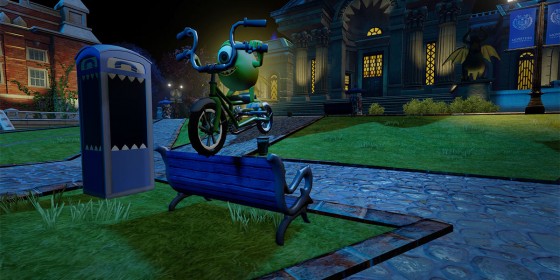 To begin with only a few objects are available, with the rest unlocked by finding Gashpon-style capsules in the playsets or by spending tokens that are gained from levelling-up the characters by defeating enemies, completing missions and the various â€˜on the flyâ€™ challenges. The ability to create racetracks holds more appeal than we envisioned and quite a few achievements can be unlocked by some simple experimentation. Placing a row of cannons in front of a row of enemy spawning devices helped us to bag us the one for defeating 100 enemies very early on.

A facilitator of fun, the Toy Box mode is a slick addition. The interface has been streamlined to the extreme and only takes a few minutes to master, but even so we do think that it may still be a little confusing for the very young.

No gamer should struggle with the campaigns though – a notable lack of challenge is Disney Infinityâ€™s biggest downfall by far. Unlike Skylanders, where the figures acted as lives, when you die here there are no penalties whatsoever – you simply respawn within a matter of seconds. To all intents and purposes, the health bar may as well not exist. Even when failing a naval battle youâ€™re back in command of the ship almost instantly, carrying on as if nothing had happened. 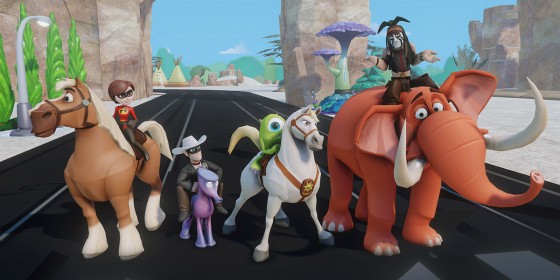 A lack of challenge runs deeper than you may think as it also renders some of the additional pocket money priced power discs pointless. What good is having a temporary health boost if thereâ€™s no setback from snuffing it? We struggle to think of one.

to see everything Avalanche has included requires a vast outlay

Challenge does exist in some form, thankfully. From the Toy Box hub a number of â€˜Adventuresâ€™ can be accessed, and every character has a handful to complete. Theyâ€™re a pretty typical assortment of mini-games similar to the Skylanderâ€™s â€˜Heroic Challengesâ€™, including gladiator arena battles, against the clock loot quests and more. Similar optional challenges can also be found in the playsets, but theyâ€™re only available if you have the figure theyâ€™re assigned to.

Speaking of figures, it’s a bit cheeky that it’s impossible to play a campaign in two-player unless in the possession of two figures from the same universe. As such, playing alongside somebody else in one of three playsets using the characters from the starter pack is a total no-go.

Considering the game is called Disney Infinity, the inability to have Mr. Incredible running around Monsters University and so forth is a bit baffling. Well, not so much baffling – it all boils down to Disneyâ€™s want to sell additional figures. 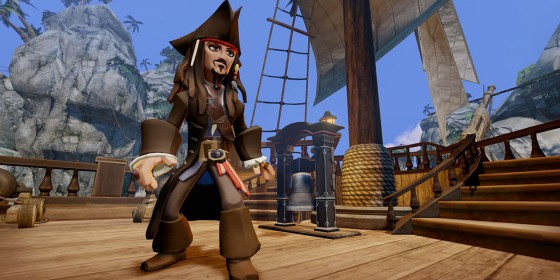 Itâ€™s because of the additional expenses that we can only give Disney Infinity a guarded recommendation rather than a glowing one. Thereâ€™s a lot of content here – a good 12 hours to finish the three campaigns and potentially limitless enjoyment from the Toy Box mode – but to see everything Avalanche has included requires a vast outlay that we’d wager is beyond the expenditure of most parents.

Although we fully understand that Disney needs to make that reported $100m back somehow, we’re sure they could have achieved this in a slightly less shameless fashion than locking content away. Those additional figures may be neat, but ultimately only you can decide on their actual worth.