Youâ€™d think that after last weekâ€™s slew of new big name releases that this week would be looking a little bare. Amazingly for a summer month, thatâ€™s not the case.

Weâ€™ve got not one but two games that are finally with us after facing lengthy delays.

Whereas the extra development time for Rayman Legends has clearly paid off – by adding a dollop of Rayman Origins levels into the mix for good measure – Lost Planet 3â€™s extended development apparently has not.

Reviews of Rayman Legends appeared online earlier this week where it was met to an overwhelmingly positive response, including 10/10 from Eurogamer and a 9 from EDGE.

The Official Nintendo Magazine also praised the Wii U version – which is the lead format for the 2D platformer, lest you forget – which made the team excited all over again about the Wii Uâ€™s GamePad and the potential it offers for asymmetrical play. They handed it a handsome 92%.

We are yet to see any reviews of the PS Vita version, but if the belated conversion of Rayman Origins was anything to go by it should be a cracker.

As for Lost Planet 3, well… it has found few fans so far.

Polygonâ€™s 7.0 is one of the highest scores it has been given, and it goes against the grain of most. For comparisonâ€™s sake, it received 4/10s from both Eurogamer and the Metro, while SPOnG gave it 4.5. The Official Xbox Magazine meanwhile thought it was merely mediocre, giving it a 5/10.

Most reviewers seem to agree that itâ€™s a mystery why Capcom bothered with it in the first place. The original was hardly a classic and Lost Planet 2 bombed.

Then weâ€™ve got Killer is Dead, a spiritual successor of sorts to Killer7 and No More Heroes. Yes – it’s another dose of Suda 51 ludicrousness.

Or is it? Lead character Mondo Zappa is a serious-minded protagonist, reports EDGE. They really enjoyed the combat: â€œKiller Is Dead has Grasshopperâ€™s most satisfying combat since No More Heroes, compensating for the lack of physical sensation with more varied and flexible systems,â€ but said that â€œit gives us pretty much exactly what we were anticipatingâ€. It walked away with a 6.

Eurogamer on the other hand found it rather mundane, giving it a 5. â€œAt various points, Killer is Dead shoots for the visual surrealism of El Shaddai, the hyperbolic intensity of Asura’s Wrath, the oddball melodrama of Deadly Premonition, the extravagant showmanship of Bayonetta. It misses by a wide margin every time.”

Amazon currently has the â€˜Fan Editionâ€™ for Â£39.99 to pre-order, which includes a CD, an artbook and a few other bits.

Nintendo must be hoping that 3DS owners are bored with Project X Zone, Monster Hunter, Mario & Luigi and the like as thereâ€™s yet another RPG hitting the handheld – Etrian Odyssey IV: Legends of the Titan.

Itâ€™s a game so huge that it features virtual graph paper maps. Scores from across the pond include a 9/0 from IGN and an 8.0 from GameSpot, who claimed that â€œEtrian Odyssey IV proves that old-school dungeon romping and exploration can be both accessible and funâ€.

Meanwhile, Madden 25 on PS3 and 360 kick starts EAâ€™s annual parade of sporting titles. The publisher has stumped up 25 reasons to buy it. A demo is now available on Xbox Live and PSN if you need more convincing. 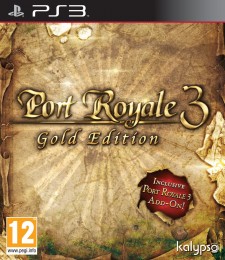 Anime tie-in One Piece Pirate Warriors 2 and seafaring sim Port Royale 3 Gold are both hitting the PS3 this week as well, while the 3DS gets Around the World with Hello Kitty and Friends. That last one comes with an AR card so you can pose with kitty herself. Joy.

As for Port Royale 3, we reviewed the standard version when it was released last year and found it to be a little tedious. Although the freedom to become either a pirate or a trader was pleasing, once you had set-up trading routes while playing as the latter there wasnâ€™t much more to it than holding down the fast-forward button and watching the coffers fill with cash. Naval combat wasnâ€™t up to much either.

Lastly, on the download services Activisionâ€™s TMNT: Out of the Shadows finishes off this yearâ€™s Summer of Arcade promotion, while the delightful Spelunky embarks onto PS3 and PS Vita with a 20% discount for PS Plus members to boot.

Spelunky and the PS Vita really is a match made in heaven.