Usually we can live with any technical or graphical shortcomings a budget game may have as long as the fundamentals are present and correct. Even then though we struggle to recommend many on the grounds that there are usually better, albeit older, games available for around the same price.

DARK is a fine example of this. It’s a stealth sim with supernatural powers and upgradable abilities, akin to last yearâ€™s award winning Dishonored. Whereas Dishonored was a pleasure to play, DARK is a right pain in the neck. We suppose that’s apt considering it’s based around modern day vampire cults.

The plot entails lead character Eric Bane adapting to become the latest vampire recruit and then learning what he must do to survive. To wit: find and kill a hierarchy of other vampires.

Between missions Eric finds himself in a trendy vampire-only nightclub known as The Sanctuary. It’s here that leads for the next mission have to be found by talking to the club’s management and regulars. You can also have a strut on the dance floor if you fancy, as well as visit the bar for a Bloody Mary. One that’s made with real blood, of course.

every single enemy goes down with one punch, no matter their size or strength

As Eric takes down his targets skill points are acquired. The ability upgrade screen does look quite deep on first inspection until you realise that most upgrades are purely passive – quieter footsteps, elongated health bars and quicker recharge times for the few super powers. Even for somebody new to the vampire underworld, Eric has a pretty limited skill set.

Despite being few in number, the supernatural talents on offer are mostly riddled with design faults. The ability to teleport short distances is available from the outset, but the means of doing so is so incredibly finicky that it can’t be relied on when trying to get out of harm’s way in a hurry. It’s especially bothersome to use when crouching down in cover and only really seems to work when Eric is stood out in the open. For a stealth game, thatâ€™s just not good enough. 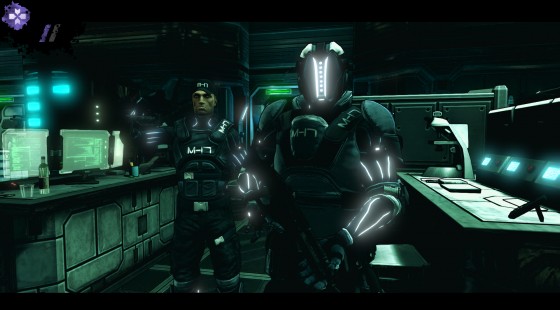 Combat doesn’t fare any better. The majority of enemies drop guns when defeated but these cannot be used. Instead Eric has to go into battle using only his fists. Oddly, every single enemy goes down with one punch, no matter their size or strength. The problem here is that you have to be lined-up either directly in front or behind an enemy to take them out. As you try to find the right position the enemy unloads their ammo clips into your face, leading to many quick deaths.

To be able to use supernatural powers blood has to be drawn from enemies. Lo and behold – it’s another botched idea.

Until the â€˜blood suckingâ€™ skill has been upgraded it takes ten seconds or so of sucking to drain the enemy’s veins, and all the while you’re vulnerable to being spotted. We wouldn’t have died half as many times had the ability to drag enemies into darkness while sucking up their vitals been included. Oh, and get this – the button to drain blood is the same as the melee button, and so you often accidentally kill enemies instead of using them to boost your power bar.

When alerted to your presence the gun-toting vampire hunters and security guards swarm on your location in a matter of seconds and death often swiftly follows. This makes DARK an incredibly unforgiving experience of not just trial and error, but also one that requires a degree of luck. Although it is possible to escape the enemiesâ€™ view and hide while waiting for them to go back to their pre-scripted AI routines, it’s a very long and drawn out procedure. It’s quicker to simply get killed and try again. 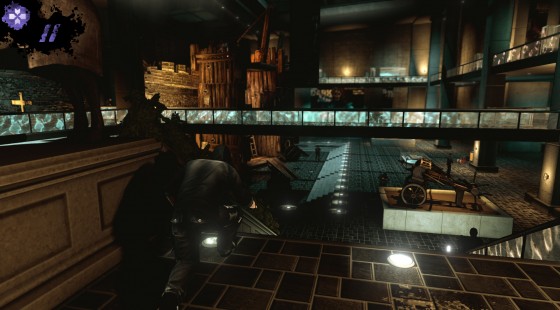 Around halfway through the number of enemies notably increases and new armoured soldiers that can only be attacked from behind are introduced. These armoured types canâ€™t have their blood sucked either, thus removing the small amount of fun that using the supernatural powers offered in the first place.

It was at around this halfway period that DARK went from being frustrating to a downright chore, especially after discovering that the level design peaks after just the first few levels – a museum full of various ancient exhibits and a neon-hued indoor forest of sorts. After that youâ€™re forced into dull warehouses, featureless office blocks and narrow litter-filled alleyways.

We soon found ourselves piling our upgrade points into boosting Eric’s health and speed skills and then simply legging it from one checkpoint to the next – a tactic that more often than not worked.

That’s when the game behaved itself, anyway. Another annoyance is that progress can occasionally be hampered by glitches, such as grenades landing at your feet within seconds of a checkpoint being loaded up. Like we said earlier, luck rather than skill is often required jackpot city casino.

Couple this with the small environments, general lack of ambition and unsophisticated AI routines and you’re left with something that feels like a throwback to the previous generation. When you bear in mind that the PlayStation 4 and Xbox One are just a few months away, itâ€™s hard to consider Realmforgeâ€™s supernatural stealth sim anything other than positively passÃ©.