This might have passed you by – the Internet was pretty restrained over it – but there was a bit of a fuss around the initial Xbox One reveal, and how Microsoft gave an awful lot of attention to non-games stuff.

That wasn’t always the way though. Until recent generations, multimedia was little more than a second thought – and further back it was quite the radical idea that a console should do much more than play games.

So let’s have a look at some of the wonky attempts over the years at integrating consoles with ‘other stuff’. 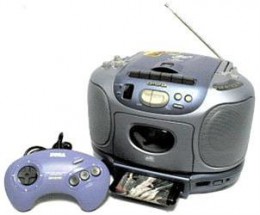 No messing around, let’s start with the very wonkiest. Some at Aiwa and/or Sega thought it would be a good idea to slap a Mega Drive on the bottom of a Aiwa portable stereo.

There was some sense in it, in that it functioned as a Mega CD. But even that was a bit wonky, as it required the Mega Drive base to be connected to the Aiwa stereo via an external cable at the back, rather than an interface where the two devices meet. It got even wonkier if you tried to put a 32X in it – literally, it wouldn’t stand up properly.

There’s nothing wrong with combining a Mega Drive and Mega CD in one unit. The Sega Multi-Mega – or Genesis CDX – was a more familiar example than the Aiwa Mega CD.

But even that was a bit on the daft side, because someone thought it would be helpful if it would also function as a portable CD player. Even in the mid ’90s you’d have looked a prize buffoon lugging that hunk of plastic around town attached to your fetching headphones. 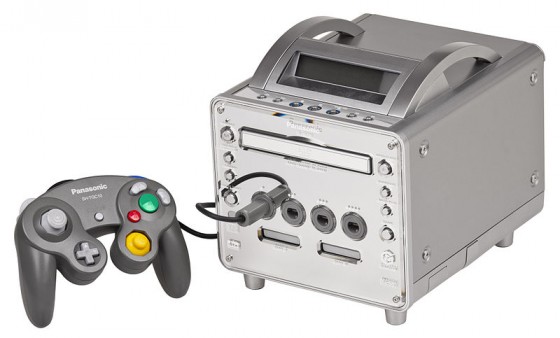 Proving that multi-function consoles don’t have to be pig ugly, the Panasonic Q was surely the most attractive GameCube released. Like so many desirable but ultimately pointless devices, it was only released in Japan.

With the PlayStation 2 and Xbox both able to play DVDs, there was a gap in the market for a GameCube with that functionality. Step forward Matsushita, who signed a deal to produce just that under their Panasonic brand, as a part of their deal to supply the GameCube’s optical drive.

Of course, it turned out that there wasn’t a gap in the market – probably because it was more expensive that buying a GameCube and a DVD player separately – and it was discontinued after poor sales. Still, it very pretty, isn’t it? 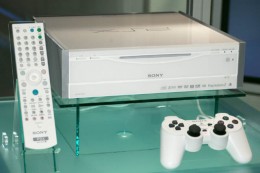 What was that about desirable but ultimately pointless devices only released in Japan?

PSX might have been a popular abbreviation for the original PlayStation, but Sony used it officially for this PlayStation 2 / DVR hybrid. As well as a digital video recorder with analogue tuner, it could do image, audio and video editing.

Being a home entertainment product, it was marketed by Sony at large, rather than SCE. Perhaps for that reason, it didn’t include a DualShock 2 pad – though a matching ceramic white pad was available for purchase separately. How thoughtful.

Another fun fact: it was the first device to use the XrossMediaBar interface, which later found its way into PlayStation 3 and PSP, as well as various Sony TVs, laptops, cameras and phones.

That a company thought it would be a good idea to release a PC with an integrated Mega Drive is slightly surprising. That two companies thought that, and completely independently brought products to market beggars belief.

In Japan there was the Sega TeraDrive, an IBM PC with Mega Drive built in released in 1991. Though ultimately unpopular, there was at least a point: the two hardware elements could interact, enabling the device to be used to develop Mega Drive games via the bundled software development kit.

A couple of years later, PAL regions got the Amstrad Mega PC. If the TeraDrive was a bit of a nutty concept, the Mega PC was just stupid: though higher spec, the PC and Mega Drive could only operate independently, meaning it was no use for development. It didn’t do well.

Those two are a pretty good illustration of the staggering number of Mega Drive variants released. Clearly that’s just what Sega did with a successful console. So it’s probably as well for completist collectors everywhere, that Sega never had a successful console again.