Itâ€™s About Time… that a developer put some thought into their gameâ€™s subtitle, rather than randomly picking a word like â€˜Revelationsâ€™ or â€˜Requiemâ€™ from a dictionary.

What pleases us so much about Plants vs Zombies 2â€™s subheading is that it works on three different levels. The curiously likeable zombies first shuffled onto the App Store back in 2009. As sequels go, it has been a bloody long time coming. The saying â€˜from small seeds…â€™ certainly rings true here though – right from the start itâ€™s clear this sequel has had a lot of love, time and attention lavished upon it. It looks superb – each plant and zombie as well animated as the next – while the dialogue often raises a grin. 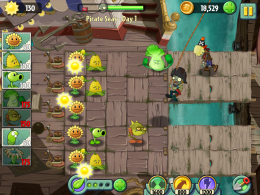 Thereâ€™s a welcome time-travel theme this time round too. The plot sees the more than slightly insane Crazy Dave eat a taco thatâ€™s so delicious that he goes back in time to eat it again. Things donâ€™t quite go to plan, however, and both yourself and Crazy Dave accidentally travel back to ancient Egypt. After taking on the mummified undead, there are bloodthirsty zombie pirates to contend with, followed by a trip to the Wild West. Each era brings a wealth of new zombie types who have their own unique attacks to catch you off guard.

Like before, using time wisely plays a huge part. At the start of each battle just a minute or so is at your disposal to start placing plants on the battleground. Thereâ€™s a slight sense of familiarity – sunflowers remain essential to collecting resources, while peashooters are the focal point of the evergreen arsenal. Itâ€™s not long though until fresh plant types are introduced, along with a handful of new power-ups.

Pinching the screen to decapitate zombies is vastly entertaining

Pinching the screen to decapitate zombies is vastly entertaining, and plant food can now be dropped onto your garden gang for a temporary super-charged attack. Experimenting with these is a genuine pleasure due to each plant being affected in a suitably different manner. We challenge you not to smile when using one on a zombie blocking â€˜wallnutâ€™ for the first time. These powerful attacks arenâ€™t just for show either – they add a further degree of strategy. 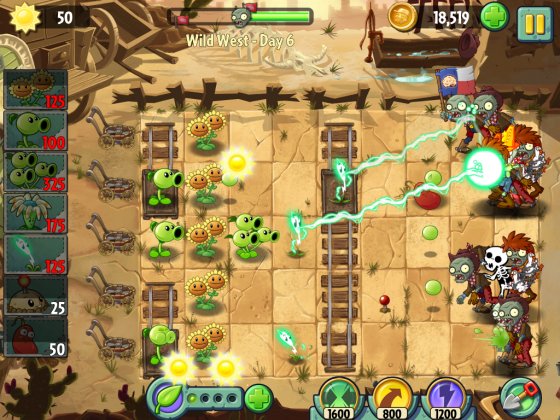 Itâ€™s About Time… that somebody did free-to-play the right way. That somebody is Popcap. There are in-app purchases in place that allow power-ups to be purchased, but even so you still need to be good at the game to succeed. Simply buying everything available wonâ€™t guarantee survival when the zombies attack in great numbers. A few messages do pop-up pointing out current deals on the gameâ€™s store, but never are they nagging. 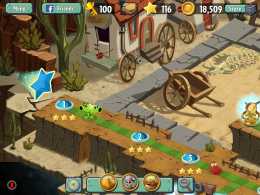 Itâ€™s not all mildly good news though. Some parts of the game can be a bit of a grind, requiring you to replay previously completed levels in search of keys that open paths on the map screens. Itâ€™s an unsteady compromise for the game being FTP, albeit one that becomes slightly less so when you consider that had it been a premium game it would likely have had some IAP in place anyway.

Itâ€™s About Time… you considered giving Plants vs Zombies 2 a download. Following the path of all good sequels, it doesnâ€™t tamper with the formula that made the first game so great, while at the same time it adds more variety and a handful of joyous new things to play with. This is easily our iOS game of the summer and chances are high that weâ€™ll still be playing it well into the autumn too, if only because of those irksome grind sessions it requires. Time will tell, we suppose.