It pleases us greatly to learn that sticker albums are still around in this day and age of handheld consoles and mobile phones that do everything. 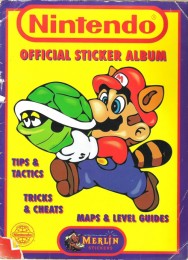 Simply owning a sticker album allowed instant social standing in the playground; long time rivalries could put aside in favour of bagging a few stickers that you and your rival may need.

I still crack a smile when recalling the time somebody from a higher year approached me and abruptly asked “Do you have Sagat’s legs?” It took me a couple of seconds to realise that he was referring to the Street Fighter II sticker album, rather than making a threat.

Today we’re looking back at Merlin’s Official Nintendo Sticker Album from 1992. It was the only album from my youth that I finished, albeit by cheating slightly and sending off for those elusive final few stickers. It’s amazing to think I considered the 6p asking price per sticker a little steep at the time.

Packs of 6 stickers retailed for 20p while the album itself cost just 50p. It may have also been given away free with one of the gaming magazines or with a red-top newspaper at some stage. Good old freebie marketing, there. 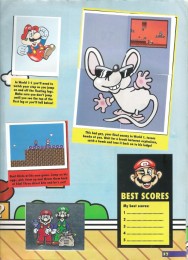 Although released in the same year that the SNES made its European debut, Nintendo’s 16-bit console wasn’t referenced at all. Super Mario Bros 3. was the newest game featured, while the few Game Boy games present were early launch titles such as Super Mario Land, Tetris, Tennis and Alleyway. Little did we know at the time that Nintendo would eventually squeeze such gems as Link’s Awakening and Pokemon out of the monochrome marvel.

A foreword supposedly from the Mario Bros. themselves started the album off, with a collection of box art stickers on the opposite page. The three NES Mario games had several pages each, pointing out where the warp zones were and providing a few tips for beating the bosses.

The pages dedicated to the original Zelda were the most helpful of all, featuring maps to the first three dungeons and several hints. The fact that both Zelda and Zelda II had sections to write down high scores suggests that Merlin wasn’t perhaps that well versed with the source material. 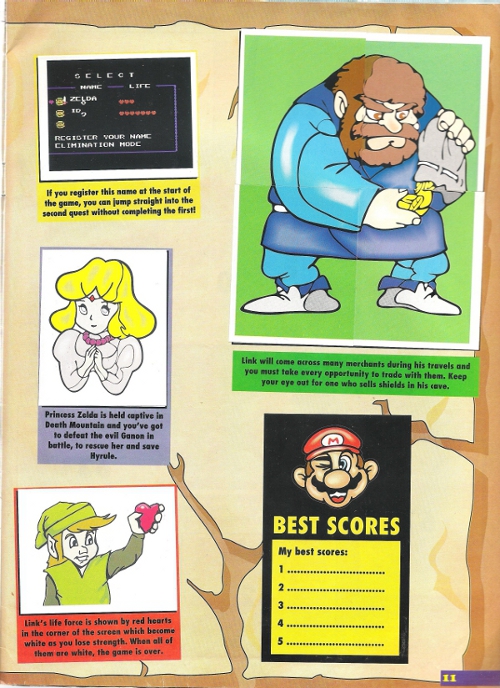 Like a lot of the early Merlin sticker albums, as opposed to Panini’s higher quality stickers, the artwork was mostly shoddily drawn as well. Quite what happened to Princess Toadstool’s nose below is a mystery: 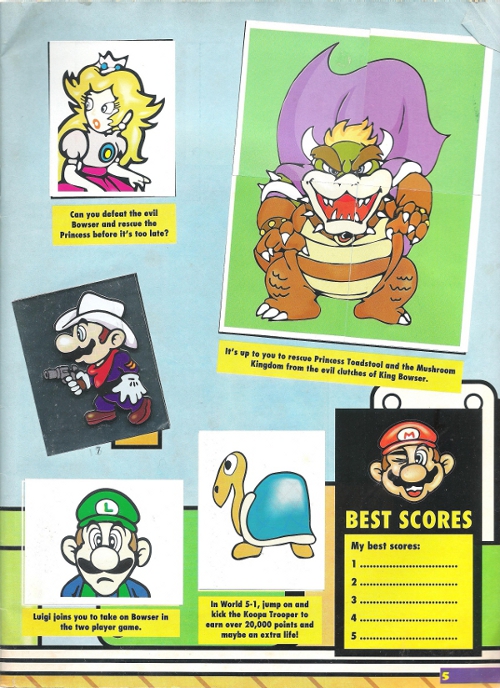 The centre pages are perhaps our favourite – a double spread of Super Mario Bros. 3 artwork, along with six shiny stickers. 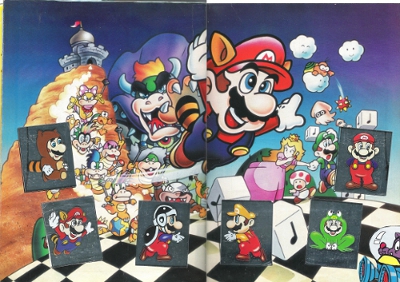 If memory serves the best way to judge whether a pack of stickers contained a “shiny” was by its thickness. Finding two shinies in one pack wasn’t uncommon. However, all playground stories of finding a pack full of shinies were total garbage. 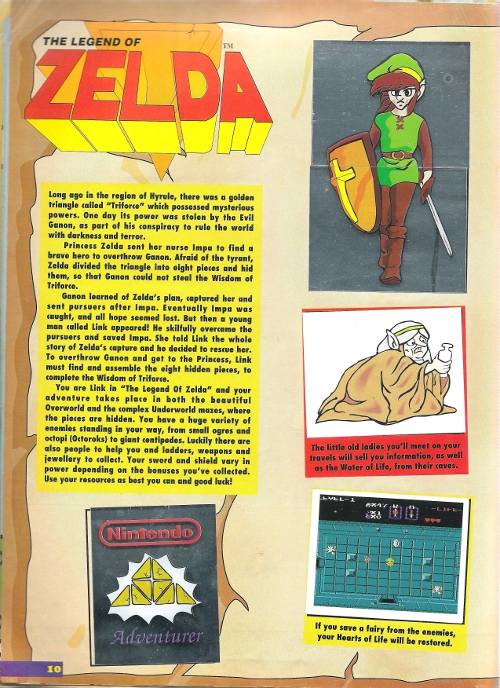 We’re also quite keen on the pages dedicated to Super Mario Land – it’s easy to forget that Nintendo designed a lot of new enemy types for the Game Boy classic, even subbing Bowser for Tatanga – a little purple alien flying some sort of jetpack/spacecraft hybrid. The campaign to bring Tatanga back for Super Smash Bros. starts here. 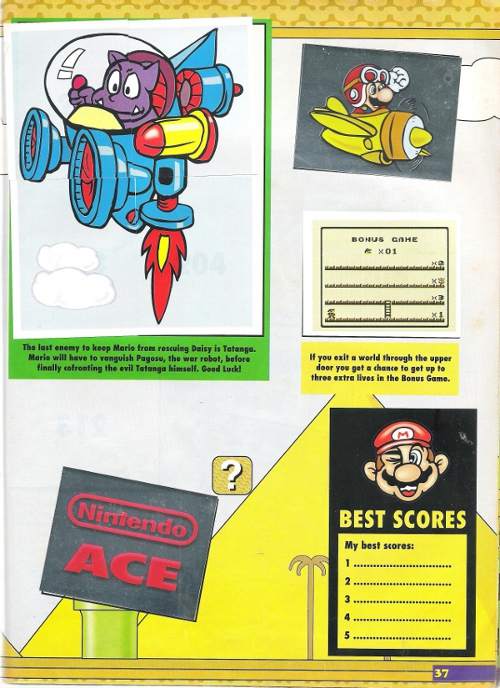 Dr. Mario and the dully titled Golf had two pages each, while Alleyway and Tennis had just one. Another assortment of box art filled the final few pages, including Rare’s Snake Rattle ‘n’ Roll and Cobra Triangle. 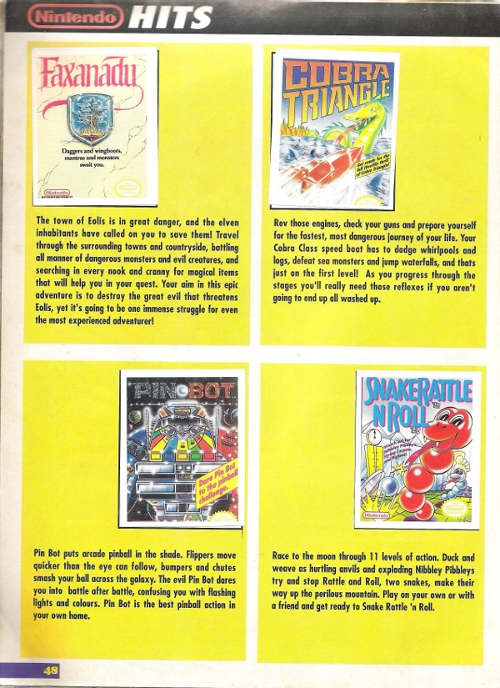 The final page featured no text, just a plain and simple image of Nintendo’s main man looking rather modest. 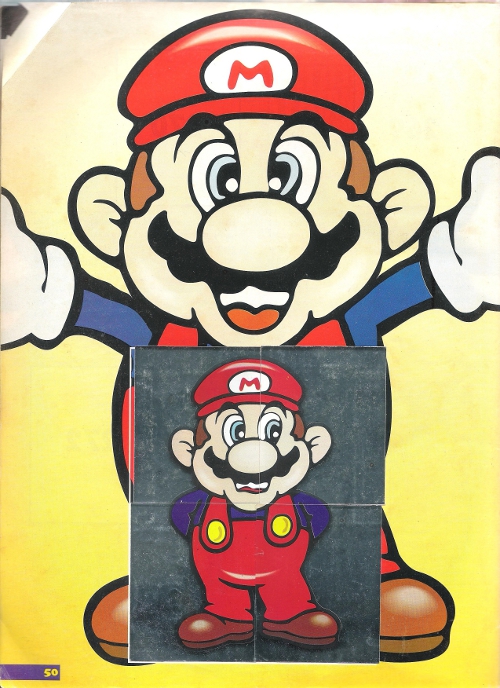 Merlin’s Nintendo album must have proven popular – after being released several other videogame-based sticker albums came and went, including Street Fighter II, Mortal Kombat II, Sonic and, rather oddly, Eternal Champions. We can’t imagine many people stuck with that one.