Mining for riches has to be one of the humblest professions known to man. Humble, yet dangerous. Chances of cave-ins, gas leaks, landslides and choking on lumps of gristle in mass-produced Cornish pasties are stacked incredibly high. Logic dictates that any job with a degree of danger has to be ideal for a videogame, although perhaps minus any presence of â€˜mystery meatâ€™ filled baked goods.

A bite-sized nugget of brilliance

Of course, SteamWorld Dig isnâ€™t the first game with a focus on mining. Such classics as Dig Dug, Lode Runner and Mr. Driller tapped into this idea many years ago, while more recently there has been the delightful Spelunky – a game so addictive that it kept us awake until the small hours.

SteamWorld Dig is the first of its kind though to blend elements from all of these, along with a few new ideas of its own. Shades of Metroid are present as well, and with no new adventure for Samus Aran on the cards we welcome them with open arms. 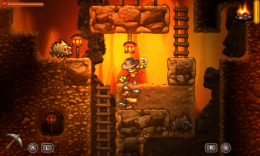 No time is wasted getting the robotic cowpoke Rusty into the swing of things. Just moments after being summoned to the ramshackle mining town of Tumbleton, Rusty finds himself clutching a battered old axe and sent into his late fatherâ€™s mine.

After the basics have been taught, it soon becomes apparent that Rusty has more than one task at hand. Not only does the likeable rust-bucket have to discover what became of his father, but the fate of Tumbleton also lies on his mechanical shoulders.

As riches are found and sold, the town slowly starts to develop. New shops soon spring up, each offering numerous tools and upgrades. Longer lasting torches prevent Rusty having to resurface quite so often, as do larger satchels, while new axes and drills help to speed up the discovery of what lies at the bottom of the mine. 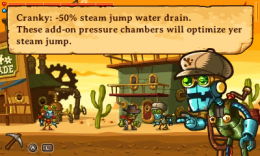 Also not long after the adventure starts Rusty learns that his father left behind a number of custom-made upgrades, many of which allow access to new areas. An invaluable map placed on the touch-screen alerts when doorways leading to new areas are in close vicinity. If you do get lost in the mineâ€™s depths then rest assured that it wonâ€™t be for long.

Itâ€™s a testament to Image & Formâ€™s superb planning and design skills that only once did we have to activate Rustyâ€™s self-destruct. This was due to finding ourselves at a dead end, and even then it was down to our own stupid fault for not keeping an eye on resources. Water is the rarest of all, required for the steam-powered drill and a few of Rustyâ€™s upgrades, and so itâ€™s recommended to have a full tank before scouting new areas. Thankfully teleports can be placed at will to make backtracking painless, and whenever you do die your backpack can be retrieved from where you snuffed it. 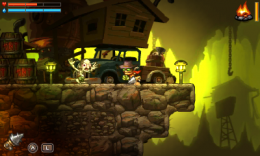 Repetition is kept at bay not just by the frequency of the upgrades but the variety of different areas. The second location brings a wealth of new enemies, while later Rusty has numerous laser-spewing traps to deactivate before continuing. As well as changes in the well-drawn backdrops, each location also sees subtle changes in the enchanting synth-led musical score.

For a small production that has seemingly sprung from nowhere, itâ€™s one surprisingly polished package. And at around six hours long itâ€™s a shining example of what the 3DS eShop is intended for – inexpensive titles that are small but perfectly formed.

A bite-sized nugget of brilliance, it had us glued to the 3DS from start to finish.