With Capcomâ€™s DuckTales Remastered and Segaâ€™s Castle of Illusion remake leaping onto the download services soon, a classic Disney platformer revival is almost upon us.

We could celebrate with a look at some of best Disney games from the â€˜80s and â€˜90s, but we think itâ€™s safe to say that your average gamer knows full well that the likes of Aladdin, Castle of Illusion, Quackshot and Capcomâ€™s Magical Quest series could hold their own against even some of Sega and Nintendoâ€™s platformers.

Itâ€™s a testament to how brilliant these games were that all of the aforementioned have stood the test of time. Animation still impresses – particularly where the 16-bit era games are concerned – and their difficultly levels remain exemplary. Challenging, but not unforgivably so.

Instead of ten of the best, weâ€™re going to look back at a handful of dusty old Disney games that have long been forgotten. Be warned though, in the case of most theyâ€™ve been forgotten for a reason. 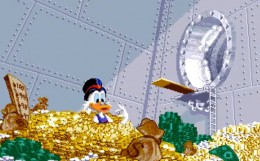 Seeing as DuckTales Remastered is arriving on PSN and the Wii U eShop this week, it makes sense to start with this avian romp first even though it has very little resemblance to Capcomâ€™s classic.

Released on Amiga, Apple II, C64 and PC, it offered some nice looking cut-scenes but very little else. Scroogeâ€™s adventure began with a horrible flying section that was practically impossible to fail – crash into the ground, or even a cloud, and the Gyro Gearlooseâ€™s red hued plane would simply bounce off as if the world were made of rubber. Platforming sections were slow and sluggish, while the rest of the game – we kid you not – was comprised of some awful animal photography sections. Just like the cartoon, eh?

Developer Incredible Technologies even managed to mess up the legendary theme-tune by turning down the tempo to the point where it was no longer toe-tapping. 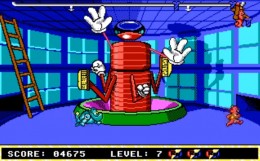 This PC-only platformer wasnâ€™t exactly a floppy disk full of fun either. The plot saw Chip and Dale out to rescue Monterey Jack, whoâ€™d got himself caught in a mouse trap deep inside a castle.

Well, perhaps â€˜deepâ€™ wasnâ€™t the correct word to use there – those experienced with the game can whiz through it in less than ten minutes. Just three different single-screen locations were on offer – a short jaunt over some potholes outside the castle, a quest to navigate the castleâ€™s staircase while avoiding flames that bellowed from candles, and then a mission to collect screws while avoiding the grasp of a giant mechanical machine.

Presentation was as bare boned as possible – no music or speech samples and the dullest title screen you could imagine. Maybe it was a good thing that it could be completed so quickly. 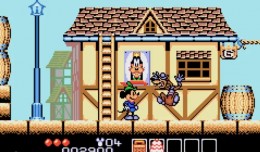 Although Castle of Illusion and its follow up Land of Illusion are very well known, the third and final part of Segaâ€™s Illusion series passed a lot of people by. Itâ€™s a bit of a shame as itâ€™s a really neat little platformer which put the Game Gear through its paces.

One of the reasons that it looked so good is that it was originally intended to be a Game Gear-exclusive, whereas the previous two Illusion games were also available on Master System. The Game Gear had a larger colour palette than that of the Master System, and boy did Sega put it to good use here. It looked utterly charming, with one early boss battle featuring parallax scrolling in the backgrounds along with a glorious multi-coloured sunset. Enemies too were creative, including snakes that were able to fly by using their tails as propellers.

A Master System version was released eventually, but only in Brazil. Funnily enough, the next game on our list is also stars Mickey, and was the last ever game to be officially released on Master System. 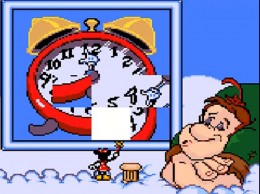 The very existence of this effort from Hi-Tech annoys us. See, the vast majority of Mickey Mouse games released in the â€˜90s were pretty good but in comparison this was terrible. It was almost as if they were hoping that the success and reputation of the other Mickey games would help them notch up sales.

The plot was set in a dream world, thanks to Mickey (or Minnie, who was also playable) falling asleep while reading a fairytale book. Jack and the Giant Beanstalk, we presume, as magic beans were what the rodent duo had to collect by completing various challenges. Each challenge took the form of a short and simple puzzle – including a card-based memory matching game and a sliding block puzzle – and were alarmingly few in number.

We can recall playing through the Game Gear version in less than 20 minutes and feeling very short changed, even though we paid only a few quid for it on eBay. We can only imagine how those who paid Â£39.99 it back in 1994 felt. 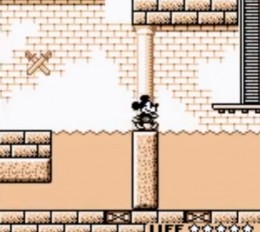 Another Mickey Mouse game? Yes, and this one has a curious history. This fifth instalment in the Crazy Castle series was released in Japan in 1993 by Kemco but didn’t make an appearance in Europe and America until 1998, where it was handled by Nintendo themselves.

Nintendo saw fit to include Super Game Boy support to the western release, adding a touch of colour to the cut-scenes and title screen. Oddly though, they chose to leave the rest of the game in monochrome – the screenshot to the right is actually from the game being played on a Super Game Boy. Another curious fact that is the title screen was sans that irritating explanation mark. Perhaps it was included by Nintendo to make the game more exciting that it really was?

After Kemco lost the Mickey Mouse rights they carried on the Crazy Castle series without the iconic mouse, with the last game in the series – released in 2003 – roping in Woody Woodpecker. Hardly a fitting substitute. 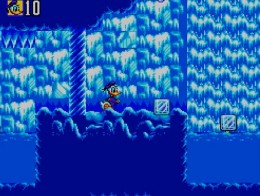 This 8-bit Sega exclusive was an unofficial sequel to Lucky Dime Caper, going under the name of Donald Duck 2 prior to release. Although the Master System version is quite hard to find, not to mention quite valuable, the Game Gear version is incredibly common due to being re-released by Majesco in 2000, along with a few other Disney games and a slightly improved version of the Game Gear itself.

Proving that Aspect knew Segaâ€™s 8-bit systems inside and out, both the Game Gear and Master System versions were a treat for the eyes. Not so much the ears, however – the music was mostly forgettable.

Boss battles were the undeniable highlight – a later battle saw Donald trying to defeat a falcon by luring it into geysers spurting water. There were a few chase sequences also, including one against a rampaging gorilla, while an underwater swimming section halfway through added some variety. 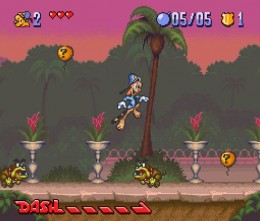 Even though the cartoon ran for four seasons and spanned 65 episodes, Bonkers D. Bobcat isnâ€™t a particularly well remembered Disney creation. Some even refer to it as a failed experiment to incorporate human characters into a Disney universe. The premise saw Bonkers, a washed out entertainer, become an American cop and much like Roger Rabbit and his relationship with Bob Hoskins, Bonkersâ€™ colleague is a human who dislikes toons.

Three Bonkers games were released in total – one each for Mega Drive, SNES and Game Gear. Capcomâ€™s SNES tie-in stood head and shoulder above the others thanks to a decent soundtrack, inventive boss battles, fast pace and a colour palette formed predominantly of soft pastel hues. Segaâ€™s effort for the Mega Drive was a lot brighter, but Bonkers himself wasnâ€™t particularly well drawn and most of the game was made up of rubbish shooting galleries where Bonkers simply had to throw donuts at enemies.

The Game Gear version meanwhile gained the sub-title â€˜Wax Upâ€™ and although it wasnâ€™t too bad itâ€™s a bit hard to recommend when the handheldâ€™s had so many other decent platformers.

Another Capcom effort now. Rather being a 2D platformer this TV show tie-in was instead a top-down puzzler.

Although some people to compare it to Zelda: A Link to the Past, weâ€™d only use that comparison lightly – the focus was on single-screen puzzles, rather than sprawling dungeons. It also had a two-player mode, and playing with a friend certainly made the block shoving puzzles slightly easier. Two heads are better than one, and all that. Quite deceptive in its design, Goof Troop was more challenging that most people realised when first slotting it into their SNES. Packed full of memorable ditties, the music really put the SNESâ€™s sound chip through its paces as well.

Goofy starred in a few other 16-bit games, including Goofy’s Railway Express and Goofy’s Hysterical History Tour, but this was easily the pinnacle of the dimwitted dogâ€™s gaming career. 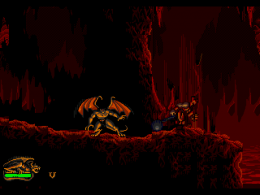 Released only on Genesis in America, this cartoon tie-in had a notably dark tone. Well, dark by Disney standards anyway – it was aimed at the teen market rather than youngsters.

For the uninformed, the cartoon series involved a clan of medieval gargoyles who after a millennium of slumber awaken to find themselves in modern day Manhattan. It gained a small fan base due to its use of complex story arcs that were seldom seen in your common Saturday morning cartoon. This 2D platformer was something of a missed opportunity to expand on the showâ€™s premise, as it featured just two of the characters and a borderline basic plot.

A SNES version was planned but eventually cancelled. A shame as although it may not have been the best use of the license, that didnâ€™t mean it was a bad game. 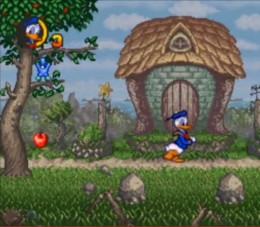 On first inspection Donald Duck in the Magic Cap – to give the Japanese name a translation – looks like a spin off from Capcomâ€™s Magical Quest series. They share a similar art direction and it too was exclusive to the SNES.

Capcom, however, had nothing to it with it – Epoch was responsible. All similarities with Capcomâ€™s classics were sadly superficial – the cut-scenes were well drawn and the music was equally accomplished, but it was a pretty run of the mill platformer with some rather odd sections here and there. A good example is the gameâ€™s beginning – Donaldâ€™s first task was to repair the windows on a large building while avoiding objects. It wasn’t exactly the most exciting of starts. Things improved a little later on, including a level set in a haunted house and another inside a factory full of giant gears and spindles to spin on, but it never rose above the mundane.

Still, Donald Duck no MahÃ´ no BÃ´shi does deserve to be remembered in the halls of video gaming history – it was one of the few games that could be used in conjunction with Epochâ€™s Japan-only Barcode Battler II. When connected via an adaptor, certain barcodes could be scanned to unlock extra content. Whether these included a pair of trousers for the semi-nude duck, we cannot confirm.