This yearâ€™s Summer of Arcade promotion begins with the fairytale adventure of Brothers â€“ A Tale of Two Sons, developed by Starbreeze Studios of The Darkness and early Xbox eye-popper Enclave fame. 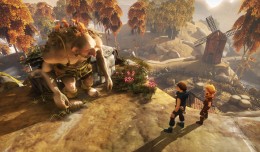 â€œThis is one journey you will never forgetâ€ claims Microsoft, and review scores suggest that they arenâ€™t wrong.

The first few reviews appeared in gaming magazines quite some time ago, but it would seem that the game was then pushed back to headline Microsoftâ€™s yearly download-only promotion. GamesMaster dished out a mighty 91% back in July, describing it as â€œLimbo meets Ico, in Fableâ€™s world,â€ while 360 Gamer also bagged an early review which was incredibly favourable.

Most of the online outlets reviewed it earlier this week though, with scores including 9/10 from Eurogamer, 5/5 from Joystiq, 8/10 from Destructoid and a 7 from EDGE.

â€œThis is a puzzle-platform game pared down to its base essentials, with a sweet, simple tale and an artfully imagined world wrapped around that core,â€ was EDGEâ€™s verdict. Most reviewers agreed that controlling the two brothers with one analogue stick each works much better than that idea initially sounds.

Itâ€™s also due out on PlayStation 3 and PC, although no release date is yet known. 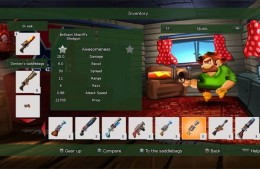 Over on PSN not one but two free-to-play titles are launching – Spartacus Legends, which we didnâ€™t think much of when it arrived on Xbox Live late June, and the three-on-three MOBA shooter Deathmatch Village. The latter is for both PlayStation 3 and PS Vita, and is based around a rebellious redneck community. Yes, pig snatching does feature.

The PlayStation 3-exclusive RPG Tales of Xillia is the weekâ€™s only retail release. IGN said it wasnâ€™t as good as Phantasia, Destiny or Symphonia, but still a worthy entry to the series.

Other reviews echo this, including the Metroâ€™s 7/10. They also shared IGN’s opinion that the graphics are a bit so-so. It has taken two years for Tales of Xillia to arrive in the west, so maybe that was to be expected.

Donâ€™t be put off if you havenâ€™t played any of Namcoâ€™s Tales games before – thereâ€™s little story connection between them, save for the few numbered sequels that have been released during the franchise’s 15 year history.

Itâ€™s a reasonably busy week on the Nintendo eShops – the SNES’s Romance of the Three Kingdoms: IV Wall of Fire arrives on Wii U Virtual Console, as does good old Galaga. 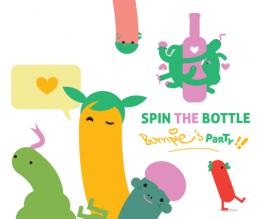 Theyâ€™re joined by Spin the Bottle: Bumpie’s Party, also on Wii U. Donâ€™t be quite so quick to roll your eyes at this Â£5.99 party game – by all accounts itâ€™s very good. The Official Nintendo Magazine gave it an impressive 88%, praising the numerous innovate ways the GamePad is used.

Then on 3DS eShop thereâ€™s the platformer SteamWorld Dig for Â£7.99, puzzler Tangram Style for Â£5.39 and the animal brutality simulator Deer Drive Legends for Â£4.49. It lets you hunt animals that are about to become extinct, and we think thatâ€™s all you need to know.