If you’ve worked in an office over the last decade or so, you’ve probably been hit at some point by the deluge of Excel quizzes. They were fun! Sort of.

Little screen caps from films or scraps of sweet wrapper or whatever, and you have to guess what they are. The whole office gets involved to try to solve the last few tough buggers and no-one does any work for about a week, until eventually the last person loses interest and gives up caring what that obscure chocolate bar is.

Of course, you don’t need a spreadsheet package to play these now – that’s what smartphones are for! 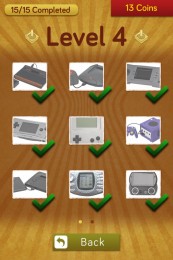 My favourite is the recently released Consoles Video Games Quiz (iTunes: free) by Spanish developer Undercoders, which gives you photos of dozens of consoles to identify.

It starts off straightforward, but soon moves into specific variants of well-known consoles, obscure handhelds and properly retro machinery. It’s around level 8 of 10 that things start to get really tricky: the only one I even recognised was that fancy silver GameCube combo that was only released in Japan (I’ll leave you to think about that for yourself).

There are hints available – manufacturer and year, and some of the letters – which are particularly welcome if you’re as rubbish on Atari and NEC as I am. Google is also of assistance. Hints are paid for with coins, which are earned reasonably generously for quickly guessing correct answers and also over time. You can buy them too, of course, and you can also pay to remove adverts – but the IAPs are really quite restrained. 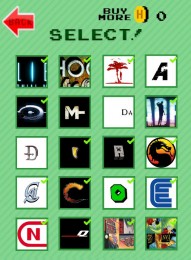 Another one I like is Guess The Game (iTunes: free) from British sorts VOiD Games, which give you bits of logo and box art to guess.

Again, hints are available, this time the first letter and a description – the latter being quite a nice touch. The game isn’t too stingy in doling out coins for free before you’d have to cough up some currency, and again ads can be disabled.

It’s a little bit crashy, and not quite as slick as the Undercoders interface, but the variety makes it worth a look.

Now, you might argue that these games aren’t exactly pushing the limits of modern mobile technology. You’d be right. In fact, they’re not even pushing modern browser technology, and you can find similar stuff online. Empire has a nice A to Z of video game logo letters to guess, albeit without the recourse to hints – which, frankly, I could do with. The little quizzes on JetPunk are quite fun too.