Whereas most RPGs take a few hours to get going, Dream Team Bros. draws you in within mere minutes. As superficial as it may sound, the way it looks is perhaps initially the biggest draw. 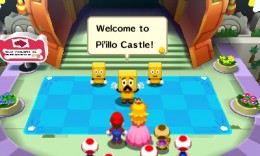 Releasing a sprite-heavy Mario game after the delightful Super Mario 3D Land may seem like a step backwards, but that couldn’t be further from the truth. It looks sensational – very much a game designed around the strengths of the 3DS, throwing around dozens of sprites on screen at once in a manner the humble DS would struggle with.

With near countless neat little touches here and there the animation too impresses, while the 3D effects are exemplary. Rather than looking tacked on or shoehorned in, parts of the game have been designed around the handheld’s 3D capabilities. Good examples here are the sections during the turn-based battles where the plumbing duo must run towards the screen out of harmâ€™s way. In some cases the illusion of depth can make pixel-perfect jumping slightly easier.

Nail a perfect attack in battle with some timely button presses and the screen melts (not literally, as Nintendo would probably like us to point out) into a dazzling array of colour and 3D imagery. Indeed, this is the first 3DS game where the 3D effects actually add something to the experience.

The opening sequence contains a number of tutorials, as you may expect, but never are they nagging. Instead they’re skilfully entwined with the plot – as Mario, Peach and Toadsworth make their arrival on Pi’illo Island, they’re faced with a small number of challenges that help to ease into the swing of things.

No gamer is left behind here – deeper optional tutorials are there should any inexperienced RPG player require. It’s a testament to AlphaDreamâ€™s design skills that this is a game which newcomers and series veterans can enjoy. A one size fits all RPG, if you will.

Some sections are a little easy (for the record, we didn’t face our first ‘Game Over’ screen until six hours in) but trying to beat each battle without taking a hit provides a challenge, and a sizeable one at that. 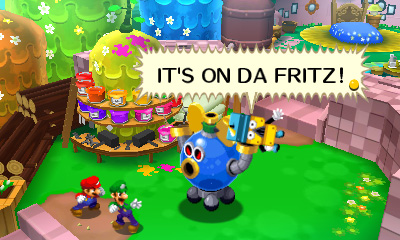 The turn-based battle system may seem a little basic on first glance but it doesnâ€™t take long to scratch the surface and discover just how finely crafted it is under the colourful exterior. See, every single attack can be countered. This is something that really impresses – no matter who you’re fighting against a small tell-tale sign is given before a blow is landed, providing just a few precious seconds to counter with a well-timed attack. Learning when to counter takes a little time but once mastered it makes battles incredibly satisfying.

The sign of a good RPG is when you purposely go out of your way to engage the enemy in battle, which is exactly what we found ourselves doing. Surprises are frequent too – just when you think you’ve seen every attack in an enemy’s arsenal they perform something unseen before.

Speaking of surprises, whereas most games show their hands early, Dream Team Bros. still has new ideas to share several hours after being started. These can vary from new tag-team moves to innovative ways Luigi can manipulate objects in the dream worlds. 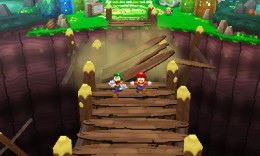 The dream worlds are where Mario and Luigi find themselves when not adventuring around the colourful locations of Pi’illo, helping out the square-headed citizens or scouring for items. These worlds are access by stone pillows, which are in fact the fossilised incarnations of Pi’illoâ€™s precursors. To track down Peach and prevent her from being trapped in the dream world, youâ€™ll need the assistance of these little guys.

During the 2D platforming sections Luigi appears on the touch screen in deep slumber. Tugging his moustache with the stylus can extend bridges while making him sneeze by prodding his nose can propel items from the background to foreground. It’s a wonderfully innovate idea, full of charming little touches. Most amusing is the way Luigi twitches every time ‘Dreamy Luigi’ jumps. The turn-based battles differ in the Dream World also – enemies are greater in number, while Mario is joined in battle by an army of ‘shadow Luigis’, for want of a better phrase.

Dream Team moves help to thin enemy numbers further, with the most pleasing of which being a nod to Namcoâ€™s Katamari series, involving Mario rolling up a ball of Luigis and then booting it at a crowd of bad guys. New tag-team moves are unlock by finding puzzle pieces while traversing the lands of Piâ€™illo, while the seriesâ€™ mix-and-match assortment of battle assisting badges make a welcome return. 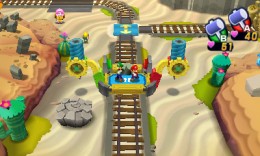 Individuality between Mario and Luigi comes in the rate the two level up. Mario starts the adventure alone, and so has a slight head start on experience points. It stands to reason, of course, that Mario is the stronger of the two. As well as the obligatory stat boost, levelling up also gives the chance to boost a certain stat in particular by a random amount, while reaching rank milestones allows a â€˜perkâ€™ to be added us as a permanent damage reduction. New items come regularly, such as stronger hammers and shiny new pairs of plumbers’ boots, and item shops to offload unwanted gear are frequently found.

Creating an RPG thatâ€™s just as enjoyable for newcomers as it is for those experienced with the genre is in no way an easy task, but itâ€™s one that Nintendo has managed to accomplish here. We arenâ€™t saying Dream Team Bros isnâ€™t without fault – we could have done without the mining section that appears halfway through, which is quite literally a grind – but it’s still another jewel in the 3DS’s increasingly gleaming crown.