We hope that in years to come somebody gets the scoop on how Ride to Hell came to be. No developer intentionally sets out to make a bad game, after all.

It was first announced in 2008 as an open-world affair, with the first trailer reporting a 2009 release. That proposed release date came and went, and with all traces of the game removed from both Eutechnyx and Deep Silver websites many believed it had been sent to the scrap pile.

What happened in the years to follow is a bit of a mystery, but we assume that it was put on hiatus while the studio focused on creating Activisionâ€™s NASCAR games.

Skip forward to earlier this year and Deep Silver had seemingly regained faith in the Ride to Hell brand, announcing two new games – XBLA & PSN download Route 666 and a beat ’em up for mobiles – alongside the resurrection of Retribution. Perhaps it was thought by somebody, somewhere, that they ought to try and scrape back the money invested in 2008. A small sum must have been laid out at some point as the cut-scenes were directed at Universal Studios while the story – which is set during the 1960s – was penned by movie maker Tom Smetham.

If Retribution simply felt dated in the way that Duke Nukem Forever and Aliens: Colonial Marines did upon release, then we could begrudgingly live with that. But not only does it look and feel like a relic from five years ago though, itâ€™s also blatantly unfinished. It’s not hard to get the impression Eutechnyx were instructed to carry out the bare minimum to get it through the Sony and Microsoft QA processes and nothing more. Most of the open-world features have now been dropped, nay forcibly cut, leaving just a hollow husk of what was once promised.

Straight from the outset bizarre designs choices have been made. It starts with a machine gun turret sequence with no explanation as to why or who you’re shooting at. Next comes a short beat ’em up section, displaying some of the ugliest ugly character models of recent times. Textures often fail to load and punching enemies results in huge nonsensical spurts of blood, like something out of the early PSone era 3D Mortal Kombat games. Next you’re presented with a shoddy motorbike chase, lasting for around a minute or so. 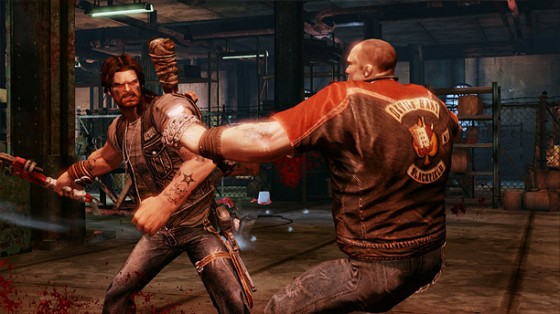 We think this intro is meant to deliver a taster of what’s to come. Similar to an action-packed movie or TV show trailer, if you will. And in a way, it is a perfect example of what the rest of the game entails – a broken and incoherent mess. Start as you mean to go on, eh?

Seeing as they’re primarily a racing studio you’d think that Eutechnyx would at least get the bike riding bits right. Alas, that’s not the case. Retribution laughs at the very idea of gravity, allowing you to defy it by horizontally sliding down long straight roads at the push of the button. Crash into another vehicle and you’ll either bounce right off it or pass through it as if it were a ghost. Collision detection isn’t the only thing missing – the only sound effect is the dull hum of the bike’s engine, while during the racing events there’s nothing on screen to indicate your placing, or even when the rage or nitro abilities are ready to be used. Believe it or not, amidst the rest of the gameâ€™s problems these are pretty trivial omissions.

Gunfights are similarity woeful. Enemies run around like headless bikers, occasionally trying to engage in fisticuffs while you’re pumping them full of lead. And what of the actual fighting? Clunky, unresponsive and stupidly violent. It’s almost as if the developers were told to include as much gore as possible to make sure it receives an 18+ rating. Supposedly for some people thatâ€™s a selling point.

Just when things look like they’re about to improve something pops up to cut any potential enjoyment short. Time-limits to catch up with a rival bikers during races are frustratingly tough, while some mission objectives are so vague that it’s not even clear what you’re supposed to be doing. Cue several attempts at trial and error until you eventually work it out.

Stick with Retribution for an hour or so and traces of a more ambitious project start to surface. The town of Dead End acts as a hub, and on first glance it does look like there’s scope for some free roaming exploration. Thatâ€™s right until you hit an invisible wall while walking halfway down the street. At least the bike customisation options are pretty comprehensive, but even theyâ€™re purely cosmetic and as such donâ€™t affect the bikeâ€™s performance.

From the ‘development hell’ survivor Leisure Suit Larry: Box Office Bust to the rushed out The Walking Dead: Survival Instinct, weâ€™ve seen plenty of poor titles over the years. None, however, have been as shambolic as this. Behold this generationâ€™s Superman 64, and pray that Deep Silver – or indeed anybody else – doesnâ€™t try and pull another farce like this any time soon.