Although Mario Sunshine will always be the undisputed king of all things sun-drenched, Pikmin 3 has more of a summery feel to it than anticipated. It has cool and inviting pools of water, a new tropical region to explore packed full of exotic fruits to find, and plenty of pesky flying insects to swat.

The crisp glaze of the snow-covered setting is enough to send a chill, while the level centred around a flowing river – complete with lily pads to hop on and off – is staggeringly beautiful. When the original Pikmin was released in 2001, weâ€™d wager this is how Miyamoto envisioned his garden gang RTS looking. And now thanks to the Wii Uâ€™s powerful innards, it finally does.

This time round there are three characters under your control – Alph, Charlie and Brittany. Their descent onto a mysterious planet to resupply their homestead with fruit doesnâ€™t go smoothly, scattering the trio across the land. The first few hours are spent trying to regroup the team, and once reformed the trio can be swapped between by the push of a button. This allows for quicker exploration of the vastly larger areas. A few puzzles also require the talents of all three, including a devious device formed of a pair of impromptu weighing scales.

No time is spared introducing the new heavy hitting rock Pikmin, while much later another new type make an appearance. Nintendo’s planning skills shine here – decent pacing keeps things feeling fresh, while the addition of new Pikmin also gives incentive to return to previous areas to collect fruit that was once unreachable.

At the end of each day a tally is shown of how much fruit – which is stored as juice – is left to take back home. The team of explorers also require one portion for their own subsistence, which prompts some amusing dialogue from Brittany regarding rationing. Descriptions given to the foodstuff found raise a grin too, even though they’re never as clever as some of those given to the items found during Pikmin 2â€™s treasure hunting exploits. 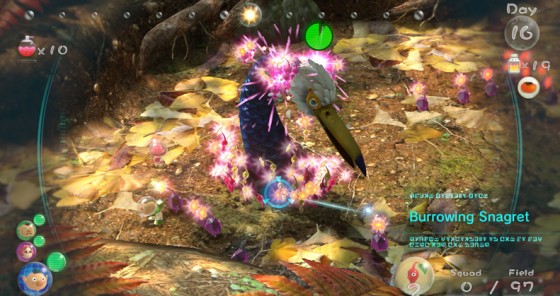 Like before, each day lasts around 15 minutes. As the sun begins to set a panic inducing countdown appears during which you have thirty seconds to round-up all the Pikmin and get them back to their onion-shaped home. The map displayed on the Wii U GamePad makes it easier to keep track of your troops than ever before.

GamePad controls are intuitive, allowing Pikmin types to be swapped between with relative ease. There were a few occasions though when going back to a humble Wii Remote and Nunchuk made progression smoother and kept Pikmin deaths to a minimum. The boss battle against a flying wasp-like entity is a good example here – the speedy yellow devil is much easier to track and target with the remote.

Bosses turn up frequently, putting up a good fight each time. So much so that some can take a day to reach and whittle down their health bar to nothing. Their difficulty levels are perfectly pitched, with Pikmin death-tolls becoming notably higher from one boss fight to the next. The final boss put our supplies of Pikmin to good use, thatâ€™s for sure. Incidentally, the last level differs from the rest. Thereâ€™s no fruit to forage; just a large labyrinth to navigate during which the Pikminâ€™s skills have to be used accordingly.

Our first play through took ten hours with just over half the fruits gained. To see and find everything in order to get the best ending can take almost twice that, give or take an hour or two. Expect that time to fly by. Level design is impeccable throughout – there’s always something to grab your attention, be it a bridge that needs building or some fruit perched way up high.

Thankfully (or should that be thoughtfully?) the option is there to replay previous days if things didnâ€™t quite go as planned. We found ourselves replaying certain sections straight away not because we messed up, but because we wanted to experience them again before moving on. 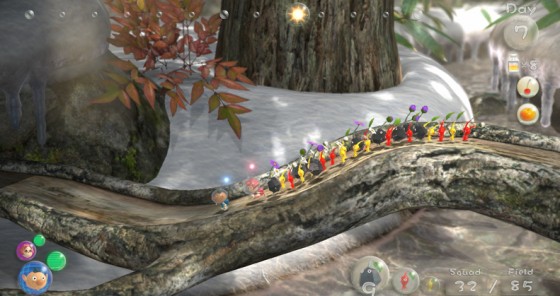 Rarely does a game tug on the heartstrings as much as Pikmin 3. Losing a pack of Pikmin can be particularly exasperating. On the flip side, the sight of seeing a posse carrying back a bunch of grapes – each brandishing a berry of their own – will melt even the coldest of hearts.

Even when the home planet of the intrepid adventurers has been saved from the brink of starvation thereâ€™s still more stuff to see. A trio of mission modes await, including the chance to battle the bosses again. Thereâ€™s also the Bingo-Battle multi-player mode which revolves around a randomised bingo card full of fruits and enemies. Whoever finds these things and complete a line first is the winner. The twist, of course, is that the other player can see your grid and try and beat you to your targets. If this mode doesnâ€™t become a fan favourite, weâ€™d be very surprised.

Nintendo asked their fans to be patient with Pikmin 3 and that patience has been rewarded tenfold. This is Nintendo on top form, not to mention further proof that if you give them time theyâ€™ll always deliver the goods.