Most developers, if not all, have a game in their back catalogue that was the one that they always wanted to create. It was their destiny to do so, if you will, or sometimes even the sole reason their studio was formed in the first place.

Weâ€™re talking about things like Bungieâ€™s sci-fi opus Halo, which came after the likes of Myth and Marathon, or Infinity Wardâ€™s Call of Duty 4: Modern Warfare – the FPS that gave the genre a right old boot up the backside. For the French game weavers at Spiders, that game was cyberpunk RPG Mars: War Logs.

a game that undeniably more people should have played

Spiders were so keen to deliver the definitive version of their vision, that they took on-board the criticisms aimed at the PC version when it was released back in April and aimed to fix them for the console iteration.

It was the voice acting and script which received the biggest overhauls, as when first translated from French to English a lot of the nuances from the language were lost, claimed Spiders CEO Jehanne Rousseau when speaking to Polygon. Over the space of just four weeks all side-quest dialogue, main storyline text and everything else they werenâ€™t pleased with was redone. It must have been a task of herculean proportions, especially when considering that the script had over 90,000 lines.

Before Mars: War Logs though, Spiders developed Of Orcs and Men – a full price Xbox 360, PS3 and PC release published by Focus late last year. Itâ€™s a bit of a shame that the same treatment wasn’t given to this RPG-lite, as the script slightly lets down a game that undeniably more people should have played.

Like Dead Island and a few other European RPGs, unnecessary swear words have been haphazardly placed into almost every sentence. Weâ€™re yet to work out why developers feel the need to do this. Do they believe liberal use of the word â€˜fuckâ€™ will make their game edgier? Or could it possibly be they think itâ€™ll make their title appeal more towards a larger demographic? Itâ€™s uncalled for, either way.

We arenâ€™t speculating that not many people have played Of Orcs and Men – according to the stat-packed True Achievements website, only 531 tracked gamers have played it. Thatâ€™s compared to the 100,383 registered gamers who have played Skyrim. Even the equally obscure Two Worlds RPGs have been slotted into more peopleâ€™s Xbox 360s – 17,487 own the original and 11,262 the diabolically poor sequel.

What’s disheartening about this is that even with a potty mouth, Of Orcs and Men manages to fare immeasurably better than the likes of Two Worlds, Risen, Venetica and other European RPGs. With the summer release schedule looking patchy we thought now would be a good time to give it some limelight. It didnâ€™t even gain that much press attention upon release, aside from a very glowing 8/10 review from Destructoidâ€™s Jim Sterling. 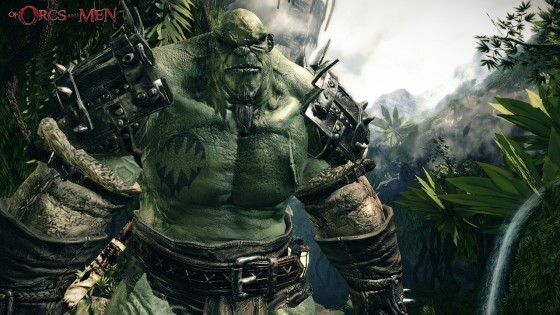 The treachery-filled plot revolves around Arkail – a mighty and respected Orc warrior, and one of the few surviving members of the Bloodjaw clan. Orc numbers are dwindling all across the globe, and many of those still standing have succumbed to becoming slaves and forced by humans to work in mines. Unsurprisingly then, humans are a sore subject for the Orcs. The leader of the Bloodjaws isnâ€™t one to believe that the two can co-exist, and chooses to make one last stand by travelling to the Emperorâ€™s tower and slaying him in cold blood.

This is where goblin assassin Styx comes into the plot. Styx is sent as a guide – his role is to get Arkail through the Emperorâ€™s defences undetected. Well, as undetected as possible – Arkrail is a hulking great beast. Indeed, comparisons with Marvelâ€™s emerald giant arenâ€™t out of the question. Like the Hulk, Arkrail isnâ€™t the smartest and often loses his temper during battle, turning the screen crimson while he rages uncontrollably. Sometimes he even knocks Styx for six in the process. A nice touch, we thought.

At the start, Styx and Arkail donâ€™t see eye-to-eye. They argue about which paths to take and whether the occasional sub-quests are going to be worth both the time and effort. Styx is also very keen to remind that heâ€™s only being paid to get Arkail to the Emperorâ€™s doorstep and nothing more. As the story progresses however, the two start to bond. They share a few laughs, complement one another on their profound killing skills and as you may have already guessed, Styx ends up hanging around for a lot longer than his contract stipulates. He’s a likeable character, and time has been given to delve into his backstory – a very curious tale that explains why Styx is the only goblin able to talk.

Spidersâ€™ storytelling skills impress here – by the end of it all we genuinely felt like we’d been on a journey, and have to admit to becoming quite attached to the green-skinned duo. Pacing is more than proficient throughout, with each chapter set in a different location and new faces showing up regularly.

Moreover, combat manages to both enthral and engage. Comparisons with Biowareâ€™s Knights of the Old Republic arenâ€™t totally invalid – battles can be paused at any time to line up four moves against targets of your choosing. Arkrail provides the brawn, charging, slicing and pounding enemies recklessly. Styx meanwhile is intended for ranged combat, armed with an infinite supply of throwing knives. Heâ€™s also able to turn invisible, allowing for some sneaky stealth kills to thin out enemy numbers. During larger battles this is almost essential to succeed. 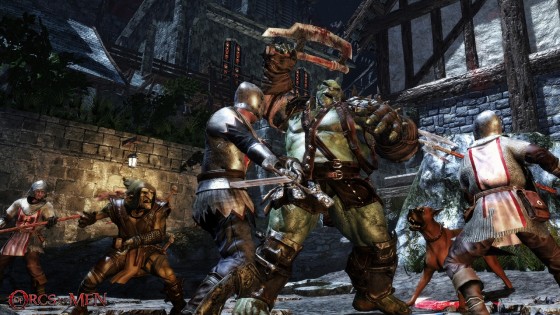 When left to their own devices, Arkrail and Styx will attack enemies automatically. They will only use basic attacks however, and arenâ€™t intelligent enough to scarper when surrounded. Being swamped with enemies can cause Styx in particular to drop dead in a flash, although thankfully the duo are able to heal one another. Discovering which are their deadliest attacks and forming strategies requires some pleasing experimentation.

Sadly, kitting the two out with an assortment of armour and weapons isnâ€™t anywhere near as interesting – the assortment of axes, daggers and armour is pretty small, with differences between them minimal. At least the menus are easy to navigate, making levelling up and improving skills a breeze.

It might be lacking in some areas, but Of Orcs and Men gets more right than it does wrong. Our interest was held for its entire 10 or so hour duration, leaving us feeling that although Spiders may not have the resources of some big name RPG-focused studios, theyâ€™re determined to deliver the best possible experiences theyâ€™re able to.

The changes to Mars: War Logs shows that; playing Of Orcs and Men more so.