This on-rails shooter from Polish developer Teyon isnâ€™t exactly the freshest game around – it was first released in the US way back in January.

US publisher Mastiff allegedly chose not to send out review copies to US press, leaving reviewers to source their own. The few that did then bother to go out of their way then ending up pouring scorn upon it.

This leaves us to assume that European publisher GSP picked it up not because they felt we were missing out, but because the vast majority of war games sell well even if theyâ€™re bad.

Considering Teyon are currently finishing off their on-rails Rambo shooter, the chances of Heavy Fire having been tweaked since its US release are incredibly slim. As such, weâ€™ve chosen to give the region-free US version the review treatment in order to provide an early â€˜heads upâ€™.

What weâ€™ve got here is a mixture of Time Crisis and Call of Duty: Modern Warfare, presented via some of lowest production values of recent times. Character models resemble wonky store mannequins that have been battered around, and most of the background music plays on continuous ten second loops. Unbelievably, those two examples aren’t the worst – in places the voice actor sounds like heâ€™s trying not to laugh while delivering his lines, yet they still made the cut.

Honestly, itâ€™s like something Midas Interactive or Phoenix Games used to knock out for a tenner during the PlayStation 2 era. 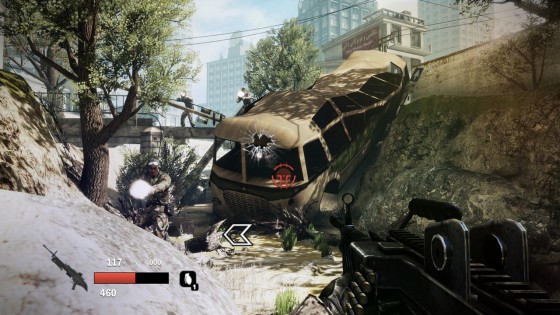 In Teyonâ€™s defence, they have managed to incorporate a half-decent lighting system into their game engine. Even then though, their fancy lighting effects such as lens-flare are incredibly overused. Presumably this is to mask how rough it looks elsewhere.

We didnâ€™t used Modern Warfare as a lazy comparison earlier – out of all the war games released this generation, itâ€™s the one Heavy Fire reminds us of the most. The setting is very similar while a few ideas have been brazenly copied, such as the helicopter mission viewed via thermal imaging at night. Scenes like this do help to provide a little bit of variety, even if they are copied almost in their entirely.

Don’t get the wrong idea here – we donâ€™t dislike the fact that Heavy Fire is an on-rails shooter. We’re down with the whole ‘arcadey’ thing. What we don’t like is that it has none of Time Crisisâ€™s tact. Whereas pumping lead into Time Crisisâ€™s bad guys felt satisfying due to the way their bodies recoiled in an over emphasised manner, everything here is so shoddy and flat that itâ€™s almost laughable.

The cover system in particular is badly implemented. Using the analogue stick to crouch behind objects and then sidle from left to right is unwieldy, and the camera movement altogether feels very unnatural. Combine this with the fact that when you take damage cracks appear on the screen, itâ€™s almost as if youâ€™re behind the controls of some sort of camera-holding robot rather than a hardened solider. Itâ€™s still possible to take damage while in cover too, leaving very few places to reload without taking damage.

Checkpoint placing is similarly sloppy. For the most part itâ€™s not too bad – die and youâ€™re only set back thirty seconds or so from when you snuffed it – but there was an instance during the final level where weâ€™d passed a checkpoint with only a sliver of health. With no health packs en route to the next brainless shoot out, we had no choice but to simply restart the whole level all over again. Three times more this then happened, until luck would have it that we eventually sailed through the checkpoint with a decent amount of health.

We can also add shortness to Heavy Fireâ€™s list of gaming crimes – two hours of play is all it takes, although a second difficulty level does open up upon completion. There are hidden objects to find in each level as well the chance to unlock bigger ammo belts, extra grenade supplies and the like. Even with incentive to play for a second time in mind though, weâ€™d wager that anybody would struggle to get more than four hours of enjoyment out of this. Or indeed any enjoyment at all.