There are more Dynasty Warriors fans out there than most people realise. After putting up with the odd duff spin-off and a few sloppy sequels, their loyalty has been rewarded with Dynasty Warriors 8 – reportedly the best instalment yet.

Scores have been resoundingly high, including a 9/10 from Destructoid.

The Official Xbox Magazine UK meanwhile stumped up two review scores – one for the fans (9/10) and one for non-fans (7/10).

The US Official Xbox Magazineâ€™s review wasnâ€™t quite as positive, however, giving it a 4.0 and noting that the visuals are poor and that there are performance issues that kill the pace.

There isnâ€™t a whole lot else out to tempt money out of your wallet this week if the thought of wiping out entire battlefields, via some vigorous button bashing, doesnâ€™t appeal.

Ubisoft’s 2D platformer The Smurfs 2 is the weekâ€™s only other â€˜big nameâ€™ release.

Itâ€™s out on just about everything – Wii U, Wii, DS, 3DS, PS3 and Xbox 360. Weâ€™re hoping that because WayForward are involved it wonâ€™t be as bad as some movie tie-ins, although the fact that itâ€™s not mentioned on their website isnâ€™t exactly a good sign.

Then thereâ€™s the on-rails shooter Heavy Fire: The Chosen Few on 3DS. This isnâ€™t a new game per say – it was first released in the US back in 2011. Publisher GSP has since dusted it off for a European release, despite US reviews being appalling.

Incidentally, GSP are publishing the 360/PS3 counterpart Heavy Fire: Shattered Spear soon at the budget price of Â£19.99. Donâ€™t be taken in by the relatively pretty screenshots – itâ€™s as basic as it is clunky, which is very. Weâ€™ll be giving it the review treatment in the not too distant future. 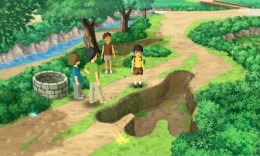 Curious about Attack of the Friday Monsters? Us too. Itâ€™s described as a â€œTokyo-life simulationâ€ in which you play as a young boy named Sohta who lives with giant monsters from 1970s Japanese TV shows. Every Friday they come to life, hence the gameâ€™s name.

Movie tie-in R.I.P.D. The Game is the weekâ€™s only XBLA and PSN release of note. We wrote a little bit about this one during E3, after spotting that it looks uncannily similar to God Mode. God Mode wasnâ€™t actually too bad – it just became dull far too quickly. As such, we expect reviews to be similar – a mixture of 6s and 7s.