You know when you’ve been playing a game of an evening, and you can still see it in your mind’s eye when you go to sleep?

Match-three puzzlers have a habit of doing it to me. Well, Garfield isn’t an obvious choice for an endless runner, so Namco-Bandai have had to set Wild Ride in his dreams. And he’s evidently been playing Jetpack Joyride. 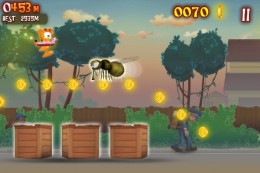 It really is very, very similar: the simple touch-to-rise controls; the coins, the obstacles, even the warnings of approaching enemies; the ‘vehicle’ power-ups; the challenges, three active at a time; the slide along the ground when you eventually come a cropper.

It’s diligently similar, in that it’s still a bit of fun, but it adds virtually nothing of its own. And the basics are lacking: the controls are flabbier for one thing, which isn’t satisfying whether it’s intentional or not.

The presentation is at least solid: the menu screens are very jazzy, it sounds quite jolly, and the graphics are perfectly pleasant – even if the inexplicable floating obstacles look like strange mattresses, and the lasagne pick-ups looked more like hot dogs at first.

It starts to look samey very quickly though: you start with only one location – the street – and variation only comes from buying additional themes. The cheapest is yours for 100,000 coins – not earned in-game at anything like that magnitude, but inevitably available as IAPs. That number would set you back Â£1.99, several times the up-front price. Poor show.

Which all adds up to little reason to throw money at a slightly pale imitation, rather than Halfbrick‘s modern mobile classic, or one of the many games which have managed to actually build on the formula.