Rather than being a straight-laced one-on-one brawler, Pacific Rim has more in common with one of the recent WWE or UFC games. Perhaps this was to be expected seeing as developer Yukeâ€™s Co. knocks out WWE games on a sometimes bi-yearly basis.

Fights are as slow and clunky as the colossal giants themselves

The Japanese developer was also responsible for 2011’s Real Steel tie-in, which gained a bit of a kicking upon release. If they learned anything from that then we failed to see it here.

Due to an emphasis on blocking, taking advantage of openings and using the power-draining heavy attacks sparingly, fights are as slow and clunky as the colossal giants themselves. Without juice a lot of the more powerful attacks are out of the question and having to block and circle constantly while waiting for the power bar to recharge can make battles feel rather drawn out.

Each of the Jaegerâ€™s two pilots also has their own HP bar to keep an eye on – lose a pilot and the amount of moves at your disposal becomes slimmer than it already is. If a pilot is lost early on, fights can be cut incredibly short. Becoming stunned is another annoying, requiring some swift button bashing to get back off the proverbial canvas. This is something that occurs as often as three or four times during a fight, and the AI is always incredibly keen to take advantage of your dazed state.

Indeed, the difficulty level is surprisingly tough for movie tie-in. It’s not hard to get the impression that this is to try and mask how little content there is. Aside from the text-boxes that occasionally pop-up to congratulate you on winning a battle thereâ€™s no storyline as such, and both the character roster and amount of backdrops are thin on the ground.

For the first half of the mission mode just two settings are used – a ruined Hong Kong city and an ocean shallow. Get an opponent near the outskirts of the city and they can be shoved into a skyscraper, while the ocean setting includes an iceberg and an aircraft carrier that your hapless foe can be knocked into.

We wish there were a few ideas like these that help to emphasise how large the Jaegers and the Kaiju monsters are. The ocean in particular is very sterile looking – knock an enemy off their feet and not even the slightest wave occurs. At least the combatants themselves are quite impressive, full of intricate detail. 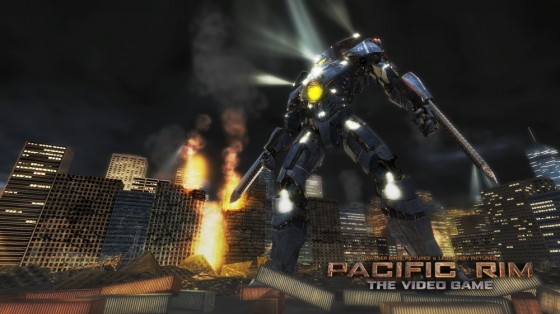 Although a tough game, there are thankfully a few ways to improve chances. New parts are unlocked at the end of nearly every battle and by completing survival missions, while modification items can be purchased using XP that can boost movement speed, attack damage and the rate of projectile fire. The handicap of your chosen colossus can be altered before a fight as well, which is something we would have liked to have been made aware of early on instead of simply finding the option by accident. It would have made progression through the first few fights a little swifter, certainly.

Other customisation options are available, but – and itâ€™s a mighty big but – you have to shell out an additional 240 MSP for the designer tool. If this was a â€˜freemiumâ€™ title we wouldn’t have batted an eyelid, but as an 800 MSP download itâ€™s more than slightly cheeky, especially when you can preview paint job designs without having to download it.

Kitting out your Jaeger with the best items can give a serious advantage over the opposition when playing online, so somewhat unsurprisingly XP packs can be purchased via Microsoft Points too. Thereâ€™s little doubting that somebody out there will be happy to (foolishly) part with their points. Currently the lobbies are packed full of people to pulverise, although weâ€™d wager thatâ€™s down to the fact that a lot of the achievements are online-based more than anything.

Pacific Rim reminds us of the type of lazy movie tie-ins publishers used to knock out during the PS2 era, hastily cobbled together and shoved out just in time for the filmâ€™s release. The only major difference here is that weâ€™re only being charged Â£7 rather than Â£40 for the chance to temporarily extend the filmâ€™s buzz. Even so, the price of a cinema ticket is still too much to ask for this shambling brawler.