Naughty Dog’s The Last of Us is a very special game, so itâ€™s fitting for us to give it a special eBay round-up.

PR types sometimes send a few little gifts out alongside review copies of games – usually a T-shirt or two, or maybe a bottle opener with the gameâ€™s logo on if youâ€™re lucky.

Sonyâ€™s specialist press freebie defied all convention however – a foam brick. What purpose itâ€™s supposed to serve weâ€™re unsure, but people wanted one regardless – this auction ended at $76.00 after 13 bids. We should point out though that the auction also included a T-shirt featuring Angel Knives – a faux videogame Ellie is a fan of.

This leads us onto the next auction nicely – a promo E3 t-shirt signed by various Naughty Dog developers, esteemed voice-actor Nolan North and others. It ended at $320.00 after 12 bids. The buyer best make sure it doesnâ€™t accidentally end up in the laundry basket. 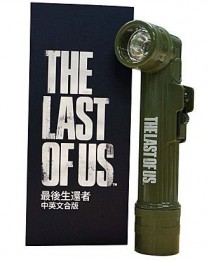 A couple of other promo items now – not one, but two different torches. Or flash-lights, if you prefer.

The Taiwanese-exclusive torch shown on the right is the more curious of the two, apparently only given away alongside the game on launch day if purchased from “Flag Store”. One sold for $152.50 following 12 bids. Weâ€™re not sure if the seller meant the Sony flagship store – Googling â€˜Flag Store Taiwanâ€™ doesnâ€™t bring up anything specific. We like that dark green torch far more than this promo flash-light given to UK press, although it does come in its own metal box.

Also more practical than a foam brick: a back metal bottle, featuring the game’s logo. Boxed and unused, this seller is yet to find a buyer. At Â£99 they may be waiting a while. One did however sell for Â£60, so they might get lucky. 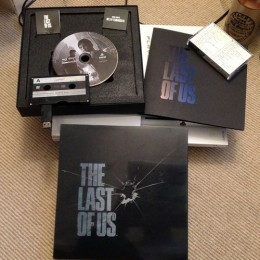 Thatâ€™s still a small price when compared to this press kit. It’s one of 2505, apparently, and sold for Â£450.00. Included inside the cardboard case was an artbook, various DLC codes, the game itself and a replica of an old Sony cassette tape. Ingeniously, it’s actually a USB device containing the soundtrack. Another press kit sold for fifty quid less.

Think that’s a lot? A collection of promo items sold for even more – Â£456.02. This little bundle included the aforementioned torch and bottle, as well as a metal cup, a holdall featuring The Last of Us logo and a foam drink can. That metal cup looks close to being indestructible. Shame the same can’t be said for the foam can – it looks a little cheaply made.

The statue available with the US-only Pandemic Edition has been selling for a lot on its own too – everything from Â£215 to Â£140. The 12 inch model features Ellie and Joel, both clutching a rifle.

At just over $20, this variant cover of issue #1 of The Last of Us comic book seems relatively inexpensive.