Itâ€™s a quiet week for new releases, but the presence of Mario and Luigi: Dream Team Bros. prevents it from being a total non-event. 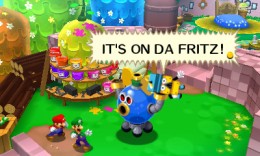 Weâ€™re curious as to how well the brothers will do in the chart next week – fellow 3DS RPG-lite Paper Mario Sticker Star entered at a lowly #40, and that was very close to Christmas. Weâ€™re sure itâ€™ll do much better than that, especially with the influx of new 3DS owners.

Thereâ€™s no disputing that it’s worth playing – the idea of messing around in Luigiâ€™s dreams is one reviewers have been revelling in. The Official Nintendo Magazine gave it 92%, calling it â€œone of the 3DSâ€™s funniest gamesâ€ and â€œtirelessly inventive funâ€. EDGE meanwhile gave it a solid 7.

Thatâ€™s it for reviews at the moment, which can probably be attributed to the fact that itâ€™s not due out in the US until next month. Europe is also getting Pikmin 3 on Wii U before the US. How times have changed, eh?

If you pre-order Dream Team from GAME youâ€™ll be presented with two rather neat keyrings. If you donâ€™t fancy walking around with a dubious bulge in your trousers it can, unsurprisingly, be had for slightly cheaper elsewhere.

The Serious Sam Collection for Xbox 360 is the only other retail release. If youâ€™re thinking “Hey, isnâ€™t there a Serious Sam collection on 360 already?” then youâ€™re right – Serious Sam HD was released back in 2011. This new compilation includes both 1st Encounter and 2nd Encounter HD, plus Serious Sam Double D XXL, Serious Sam 3 BFE and the Jewel of the Nile DLC. Amazonâ€™s Â£26 asking price does seem a little expensive, but only until you consider that to download all of that content from XBLA it would set you back 4000 MSP – around Â£35. Lord knows how much thatâ€™ll be after the reported Xbox Live price increase.

PSN plays catch-up this week with the short but good The Walking Dead: 400 Days, priced at a modest Â£3.99. Thatâ€™s joined by Tokyo Jungle Mobile, the first big-name PS Mobile title since… err… Minecraft is on there, isnâ€™t it? A couple of free DLC pieces are out now too – â€˜The Fallen Knight and the Scornful Gazeâ€™ for Soul Sacrifice and a free drift car for GRID 2. The latter is also available for the 360 version.

Usually a new game graces XBLA every Wednesday, but not this week it would seem. Chances are it’s because Pacific Rim: The Videogame is hitting the download services on Friday to coincide with the movie release. Itâ€™s by Japanese developer Yukeâ€™s Co, who released the Real Steel game last year. We wouldn’t be surprised to learn that the two share the same engine, seeing as both are one-on-one brawlers. Real Steel got a bit of a kicking so don’t hold much hope. Still, Pacific Rim should at least look as nice as its silver screen brother if the screenshots are to go by.

Then over on the Nintendo eShops thereâ€™s the apparently very good G.rev shooter Kokuga on 3DS for Â£13.49, My Farm 3D for Â£6.99, Stars Wars Pinball on Wii U for Â£7.99 and three Wii U Virtual Console releases – Metroid, Kid Icarus and Donkey Kong. The barrel chucking ape will only set you back a bargain 30p until 13th Aug. If you fancy your chances of being crowned the next King of Kong, then be prepared to put the hours in.