Every Nintendo format from the N64 onwards has received an Animal Crossing game, so it stands to reason that the series will appear on Wii U at some point. Here are five ideas weâ€™d like to see in the future. 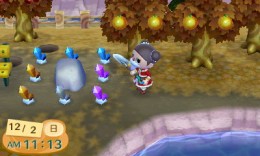 The museum has always been Animal Crossingâ€™s focal point – something to fill with creepy crawlies, paintings, fossils and fish of all shapes and sizes.

The inclusion of a metal detector could allow for various historic artefacts to be collected such as arrow heads, coins, gold nuggets, metal ore, ancient tools, pieces of armour and landmines. Well, maybe not that last one. During the rain items would become easier to find and be greatly increased in number.

We can’t be alone in thinking that archaeology in Animal Crossing is something a lot of people would dig.

An idea borrowed from Harvest Moon, but thatâ€™s nothing to be ashamed of. Animal Crossing owes more to Natsumeâ€™s nurturing sim than most people realise.

Every map could include a mine where unique fossils, gems and more are found.

Now hereâ€™s the catch – you can only mine for a few minutes a day before becoming exhausted. This would fit in perfectly with the seriesâ€™ drip-feed nature, and also the new social side of things – friends could be called in to excavate your mine quicker. Once the mine has been cleared – complete with a substantial reward at the end – it could then be turned into a tourist attraction, with a ticket office ran by, oh we donâ€™t know, a mole or something. 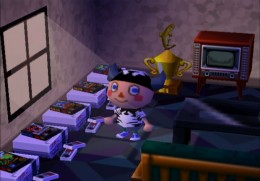 Newcomers to Animal Crossing may be surprised, or even slightly swindled, to hear that the GameCube version included numerous NES games. They werenâ€™t minor titles either – both Zelda and Super Mario Bros. featured.

There were no download services at the time to sell their back catalogue at a premium rate, so Nintendo was quite happy to include a handful. They could even be transferred onto a GBA and stored on the internal memory for handheld play.

Hereâ€™s a way Nintendo could bring them back to Animal Crossing without risking a loss in Virtual Console sales. To wit, every month Tom Nook takes delivery of a new arcade cabinet and places it in his shop – a similar notion to US convenience stores, or British chip shops in the â€˜80s if you prefer. Players can then visit and try and beat one another’s high scores. These are saved on the cabinet until Nook wheels the machine off, or could ask him to keep it for another month. The downside of this is that you wouldnâ€™t get to see what the next cabinet would be. Game selection would be randomised, thus giving another reason to town hop. 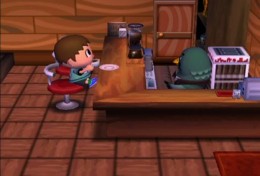 One of the benefits of playing New Leaf with the sound up – other than the wonderfully minimalist musical score – is that you can hear insects nearby and then prepare yourself to catch them unaware.

What, then, if birds could be heard too? Pulling out a camera with a zoom option would activate a first person gyroscope-controlled view, allowing you to snap birds as they perch on trees, buildings and rocks. Photos would then be rated, just like in Pokemon Snap, and placed in the museum.

Don’t start snapping Brewster though, unless you want a fist of feathers in your face.

No feeding the animals now, you hear?