Even though this unexpected â€˜special episodeâ€™ is a spin-off rather than something more substantial, Telltale has weaved yet another incredibly compelling story. Well, five short stories to be precise – 400 Days is set during various intervals of the outbreak, with five bite-sized chapters to play through.

Each lasts around twenty minutes and introduces a new character while shedding a little light on their backstory. When all five are complete a short final story then occurs to link them together. Think Pulp Fiction, but with less gimp-suits and more zombies.

a finely crafted set of tales

Itâ€™s an ambitious way to tell a story, and Telltaleâ€™s want to push the boundaries of storytelling doesnâ€™t end there – a ransacked diner provides a common theme. One chapter includes a moment were the original owners are seen trying to protect their property, while another sees the diner being used as shelter for survivors, long after the owners have perished. The five individuals may be from all walks of life, but this gives some ground between them.

Although the chapters can be played through in any order, it makes sense to start Vince’s story first as it takes place during day one of the outbreak. This puts it in the same timeframe as the start of Season Oneâ€™s first episode. It seems such a long time now that we were first introduced to Lee, as that mysterious detainee in the back of a police car. Vince’s story is similar – a prisoner being transported on an armoured bus, along with half-a-dozen other criminals. Letâ€™s just say that itâ€™s not exactly the smoothest of trips, leaving you to make an important choice towards the end.

Shel’s story is a curious one – the tracksuit suit wearing mother is meant to be the lead character, but instead her young daughter Becca steals the limelight. Becca is a fine example of Telltaleâ€™s intricate character design – the events occurring in the outside world have affected her young mind in a believable manner. Unlike Clementine she is not naive and sheâ€™s able to make her own decisions. Beccas facial expressions are noteworthy also – far less exaggerated than some of the faces the likes of Lee pulled when confronted with something shocking. Shel trusts Beccaâ€™s judgement even though sheâ€™s barely a teen – the mother and daughter bond between the two is tight, especially when being forced to make a moral decision. Of course, this is your call. 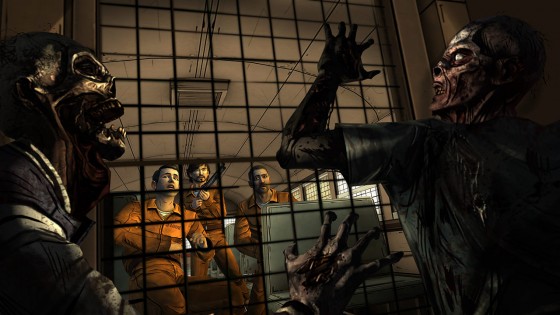 We observed the same during Russelâ€™s story. Russel is but a child; a shy, timid teen. Think along the lines of the kid at school whose mum blatantly shopped at BHS. His backpack even has his name clearly written on, bless his cotton socks. Russel makes the decision to take a lift from Nate – a character who isnâ€™t quite as they first seem. Indeed, Nate almost appears to get pleasure out of putting Russel in danger, brushing it off as if nothing bad could have possibly happened. It’s Russelâ€™s docile nature here that leads Nateâ€™s wild personality to overshadow this chapterâ€™s star. The two end up making an unlikely duo, venturing out to find supplies. Rest assured that lessons are learned the hard way.

Then weâ€™ve got Wyatt. With his long hair, glasses, beard and geeky T-shirt you get the idea that heâ€™d much rather be at home shooting zombies in a videogame than in â€œreal lifeâ€. His story is one of the few in which you get to take down a few walkers with a pistol, but not before shots have been fired during a car chase through a swap coated in thick fog. Achievement hunters beaware – this chapter includes a missable achievement (a series first) thatâ€™s gained for winning a game of rock, paper, scissors between Wyatt and his stoner friend Brett. As you would have thought, theyâ€™re playing to determine which one of them will carry out a task that neither of wants to do. The presence of fog makes the task at hand that even more unnerving. 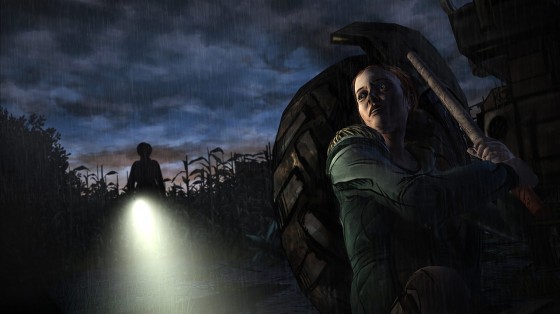 This leaves us with Bonnie – a character Telltale has left you to assume is a recovering drug addict. Her chapter is both brutal and tense, with one scene in particular a little on the grotesque side. A moral choice features here and is slightly more subdued than the other two mentioned – a simple case of telling the truth or not. The fear of the outcome provides a bit of tension, as does the setting – a large cornfield at night, while being chased by a gang of flashlight wielding survivors.

The voice acting has always impressed in The Walking Dead games, but here it really shines – plenty of lines are delivered with a genuine sense of emotion. There is still some wooden animation on display though, and at around only two hours itâ€™s the shortest of all Telltaleâ€™s episodes so far. Pretty minor criticisms, to be fair.

To think, it was around a year ago that Season One’s first episode was unleashed onto the unassuming public. Many were blown away by the pacing, depth of the character design and rare sense of logic that went into the puzzles. Skip forward twelve months or so and Telltaleâ€™s skills have increased further still – 400 Days is a finely crafted set of tales, way beyond what we initially thought the studio was capable of.

Enough of the teasers – we’re more than ready now for Season Two.