If youâ€™re thinking that Activision publishing a Deadpool game is a little out of the blue, then weâ€™d whole heartily agree. The â€˜merc with a mouthâ€™ may be well known by the comic book clique, but is still relatively unheard of outside of superhuman fandom. Youâ€™d think that a game to tie-in with the upcoming Wolverine film would be a safer bet. Activision, after all, is renowned for playing it safe.

Whatever reason made them pick up the license, weâ€™re glad that they did. Too unpredictable and psychotic to be an outright hero, Deadpool is one of Marvelâ€™s most enigmatic creations. Coupled with his Wolverine-style healing ability and passion for cold hard killing, he’s also an ideal character to base a game upon.

Moreover, weâ€™re glad that Activision chose to hand the license over to High Moon. The studio puts more effort and attention into licensed games than most. Even their Bourne Conspiracy tie-in was pretty good.

Nolan North has once again been called in supply the voices of Deadpoolâ€™s double persona – both his irrational and slightly less irrational side. Itâ€™s arguably Nolanâ€™s best work yet – Deadpoolâ€™s personality shines bright, with the red-clad mutant bickering away almost constantly. Itâ€™s a good job, then, that he has plenty of amusing things to say. He mocks the army of clones heâ€™s up against, argues with the voices inside his head and sometimes makes the odd sarcastic comment in your direction.

See, the premise is that Deadpool contacted High Moon personally to star in a game. This leads to more than a few phone calls throughout the gameâ€™s duration about how the budget should be way higher and suggestions as to what should happen next. Itâ€™s an amusing set-up, backed by the idea that there is an atypical plot in place starring the manipulative Mr. Sinister but Deadpool chooses to ignore the script, instead completing objectives and taking down bad guys as he sees fit. Cut-scenes are often genuinely laugh out loud funny – the rare kind that youâ€™d want to show off to your friends the next time they come over.

A prologue set inside Deadpoolâ€™s flat helps to acquaint those not familiar with the character, throwing up a few stupidly easy achievements in the process. â€œOh, this is going to be one of those games is it?â€ he quips as you rummage around his homestead. The majority of the rest of game is then set on Genosha – a superhero haven that has been turned into rubble by colossal Sentinel robots. The few puzzles (for want of a better word) that feature are based around finding power cells and harnessing the power of the Sentinels left to rust. Itâ€™s the little ideas such as this, along with the striking setting, that adds some extra appeal for fans of the source material. 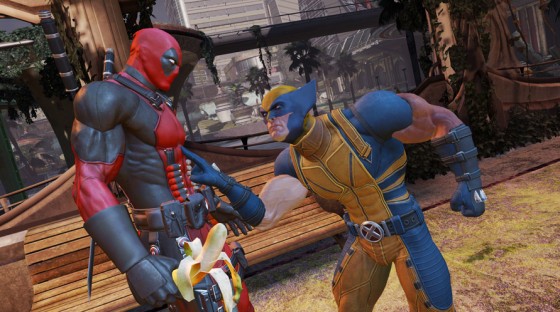 Another thing bound to delight the fans is that each of the six levels features a cameo of some sort, with Wolverine and Cable being the most well known. The bad guys on the other hand are so â€˜D-listâ€™ that even Deadpool mocks their obscurity. â€œSeriously, could we not afford anyone better?â€ he questions after being challenged by Vertigo – a femme fatale with the rather insignificant ability to make people feel a little woozy. Cue one section where the screen distorts in a purposely irritating manner.

Combat is of the swords and pistols variety. A kind of watered down Devil May Cry, if you will. Four different melee weapons are available in total, along with the same number of guns. We found ourselves sticking with the pair of sais (sai?) as high combo counts come easily when equipped. Oddly, the guns can be purchased in any order – we recommend buying the plasma rifles as soon as possible as they take down the annoying flying enemies with relative ease. Every weapon can be upgraded by spending Deadpool points, and chances are that you wonâ€™t have everything fully upgraded by the time the game rather swiftly ends. For extremist completests if nobody else, that provides a reason to return. Sadly, there arenâ€™t many more, other than different difficulty levels and a half-baked challenge mode.

Although combat is flashy, complete with juggle combos and the rather nifty ability to use bear traps to stop enemies in their tracks, it can at times be frustrating. More than a couple of enemy types can cause considerable damage and these attacks come without warning. Clones armed with guns can do a lot of damage also, and although Deadpool has the ability to teleport it’s not long until theyâ€™re locked onto your position again. For all his superhuman skills, we spent a lot of time cowering behind obstacles waiting for the automated healing ability to kick in.

The last level in particular had us swearing more times than the merc himself. It has been revealed that High Moon are being downsized upon Deadpoolâ€™s competition, and itâ€™s when you reach the final level that Deadpoolâ€™s truncated development rears its ugly head. After navigating a ransacked prison and exploring some ancient ruins – which feature a mine cart ride thatâ€™s anything but predictable – youâ€™re forced to navigate some dull floating platforms before ending up at the front door of Sinistarâ€™s lair.

Ostensibly to pad things out until the end, youâ€™re then faced with thirty minutes or so of greatly outnumbered bad guy bashing followed by [possible spoiler] having to take down all of the previously defeated bosses again, and at the same time. On their own they provide the perfect challenge – tough to beat, but not unfairly so – but together itâ€™s chaos, and not of the good kind. A few times we restarted only to die within 10 seconds or so.

Itâ€™s a very sloppy finale that left a sour taste behind, made only more disappointing by the fact that the rest of the game is pretty decent as licensed games go. Thereâ€™s enough variety and unexpected moments to effortlessly carry it through until that terrible final level, with Deadpool himself so unpredictable that you want to keep playing just to see what the clown gets up to next.

Itâ€™s not enough though to prevent Deadpool – the game, not the character – feeling a little throwaway, which is kind of ironic (or apt) when Activision clearly sees the developers in the same way. As such, chances are high that Deadpoolâ€™s first proper videogame foray will be remembered for being amusing rather than amazing.