Talk about making a bad first impression. Just like Doritos Crash Course 2 – the last free-to-play Xbox Live title – Spartacus Legends requires a constant connection to a server to play. Our first session was a dismal experience – even cycling through menus resulted in minute-long loading screens, while online battles stuttered with infuriating two or three second pauses.

We were ready to give Ubisoftâ€™s one-on-one brawler a bit of a kicking, but as the saying goes – what a difference a day makes. After returning to it the following evening we found the servers to be much more stable. Those minute-long loading screens now just lasted a couple of seconds, while online fights required skill rather than luck – the opposite of the day before.

Itâ€™s impossible to say if the problems we encountered will resurface, although we canâ€™t imagine the servers being jam packed for long. After spending a fair bit of time with it we were left with the impression that the decision to make this TV tie-in free-to-play was made for a reason. To wit: Ubisoft realised that sales would be poor had it been a regular release. With the free-to-play model thereâ€™s always the chance somebody will cough up MSP out of sheer courtesy, or somewhat more likely, pay to get an edge over the competition.

Another thing that limits appeal is that it’s very hard to see how this brawler has benefited from the license. Fans in particular may feel flummoxed as to why, rather than playing as one of the show’s stars, youâ€™re instead presented with a random gladiator. Or â€œa shit eater from the minesâ€ as theyâ€™re rather vulgarly referred to at one point.

The idea is that you form a collection of gladiators, each with a different fighting style, and improve their rankings by purchasing new weapons and armour. Theyâ€™re seen as a disposable force – if fatally wounded at the end of a battle then you have to use some of the in-game currency to bring them back from the dead. Choose not to and theyâ€™ll never grace the blood stained arenas again.

Currencies comes in two shiny forms – silver and gold. Silver accumulates quickly, gained by winning the battles that you can pick and choose from on the map screen. A small amount is also handed out if you fail a match, which is a welcome form of compensation even if it doesn’t strike us as being historically accurate.

At the start you’ll have to make do with hand-me-downs such as worn sandals, buckled shields and dented swords. It wasn’t until around three hours in that our gladiator didn’t resemble a peasant, marching into battle with a full coat of armour and one of those helmets with a red feathery thing on top. If you want to buy items above your level then gold has to be spent, and it doesnâ€™t come freely – just one or two pieces are acquired by levelling up, and each level increase requires dozens upon dozens of fights to be won. 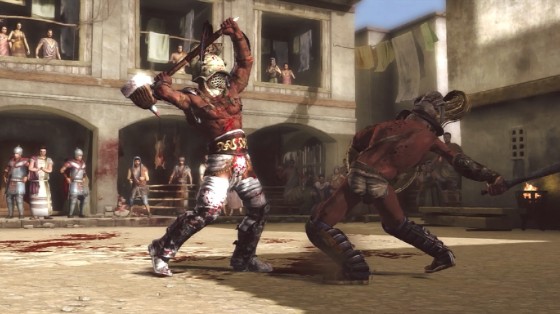 This is where things get a little cheeky. Want to remove a perk from a character in favour of a better one? That costs two gold pieces. Getting kicked about by the bigger boys online and need a boost? There’s plenty to choose from, but all at a cost. Want to refresh the recruitment screen in hope of finding a high ranking gladiator for a bargain price? You can wait thirty minutes or spend five gold. You donâ€™t have to, of course, but doing so will make progression that much smoother.

The minimum in-app purchase is 400 MSP for 50 gold pieces – which is enough to recruit a decent gladiator or two and kit them out with the pointiest of swords – while the maximum has been set at 1,200 MSP. That’s around a tenner in real money. Had this been released at that price on XBLA we doubt that very few would have made a purchase.

To defeat all legends in every district without spending a real-life penny takes time and considerable effort. Unsurprisingly, it wasnâ€™t long until we hit a brick wall. In order to clear a district we had to defeat a legend from the show who had a threat rating of 284. Our rating at the time stood at a mere 64. His fall from grace did come eventually, but not until we grinded on the easier competitors for a good hour or so. Occasionally you’ll need to recruit a gladiator with a certain fighting style (dual swords, hammer, etc) to take one of the legends, which not only costs a lot of silver, but you also have to fork out for an extra slot in your gladiator roster.

And what of the actual fighting? A bold and brash case of style over substance. Blood spurts, metal clashes, taunts are made and limbs get severed but thereâ€™s little in the way of nuances or techniques. Blocking feels somewhat sluggish, but thankfully rolling offers a more reliable way to escape harmâ€™s way with good haste. Thatâ€™s as long as your bloodthirsty brute isnâ€™t wearing heavy armour – some items can affect rolling speed, while others can alter chances to parry. Fights are fast paced, thus short, and if the crowd has been worked up by chaining attacks in quick succession then the opposition can be killed outright rather than spared.

Presentation is far from lavish – the commentator rattles off the same ten-or-so sentences during every battle, while the backdrops are simple featureless arenas with badly animated bystanders. We also found it quite odd that you can’t play people on your friends list online – battles with random players are all that’s on offer.

Special moves aren’t of the usual ‘down, forward, punch’ kind either. Instead, every gladiator type has their own set of combos, which are pulled off either by holding left or right and tapping X or Y. There is a degree of tension to every fight though, which mostly comes from the inclusion of a frequent slow-mo feature that provides a few seconds of anticipation as to whether your blow is going to cause significant damage, or even land at all. A simple feature it may be, yet it’s one that makes fights that more engaging.

It can be satisfying to defeat somebody stronger than yourself, and watching your warriors go from “shit eaters” to legends does add a much needed sense of progression, but ultimately Spartacus Legends is free-to-play done the wrong way.

We donâ€™t want to have to fight against the same old faces again and again to get anywhere, and we certainly donâ€™t want to fork out money to refresh the character select screen. Microsoft may seem a little too eager to make money these days, but at least Happy Wars and Doritos Crash Course 2 didnâ€™t constantly tug at your virtual wallet.