If we were asked to name three things Insomniac has brought to the world of videogames our reply would be something like this – purple talking dragons, wise-cracking robot sidekicks and over the top weaponry.

Fuse features just one of these things, and you can probably guess which.

Stupidly powerful sci-fi weapons are the whole premise for this third-person shooter, in fact. Scientists have managed to reverse engineer alien technology to create an arsenal of prototype weapons with a very destructive nature. After a break-in at the testing facility they end up falling into the wrong hands – an organisation known as Raven. Specialist squad for hire Overstrike 9 – a nod to Fuseâ€™s original name – are then called in to prevent them being used for terrorist attacks, but not until each squad member snaffles an alien weapon of their own on the sly.

From start to finish youâ€™re joined by three AI-controlled teammates, each of which has their own unique plaything. The chisel-jawed Dalton carries a translucent screen-filling shield, while Jacob favours a crossbow that fires what only can be described as molten rods. Neat little touches are frequent – every crossbow bolt has the chance of a â€˜critical strikeâ€™ thatâ€™ll pin enemies to walls, while if you look closely you can see enemies’ bullets lodged into Daltonâ€™s shield.

Izzy and Naya are the females of the team – a hacker and assassin respectively. Izzy carries the very nifty â€˜shattergunâ€™ which produces a black crystal-like substance that smothers enemies and occasionally those nearby too. This leaves us with Naya, who comes clutching a rifle that can produce a vortex. The downside of this weapon is that it drains fuse (read: ammo) in a flash. The usual array of sniper rifles, SMGs and shotguns make up the rest of arsenal, and if you fancy getting up close and personal there are both melee and stealth attacks. Performing either of these triggers a snappy (quite literally, in some cases) little slow-mo animation.

Every kill bags XP and by combining attacks additional XP can be gained – using the crossbow on enemies covered in crystals has a very explosive effect in particular. AI teammates earn XP as well, although seemingly at a slower rate than yourself. After rising up the ranks new secondary skills open up for each character, including Izzyâ€™s very handy medical beacon that heals anybody in close proximity.

Enemies come thick and fast – our final body count stood at 1,250 according to the stats screen – and if you donâ€™t make good use of cover youâ€™ll find yourself being â€˜downedâ€™ quite often. With three teammates on your side though thereâ€™s usually somebody nearby to pick you back up off the floor. Even though specialist agents, the members of Overstrike are rather oddly unable to fend off enemies with a pistol while waiting for recovery. Occasionally would-be rescuers get caught in a grapple en route, and thereâ€™s nothing you can do but watch.

Squad members can be swapped between at any time, although there is an odd five second or so wait to endure every now and then levitra over the counter. We only really felt the need to swap characters to use up their grenade supplies during boss battles and whenever the heavily armoured mech units appeared. Which is excruciatingly often. 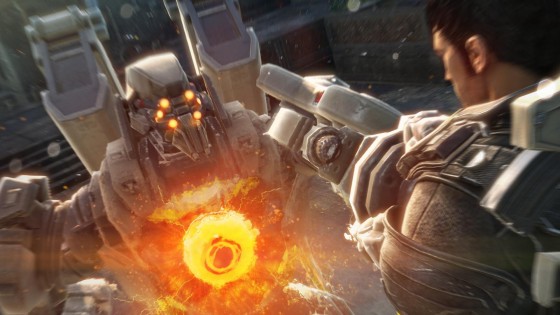 The design of these mechs is aesthetically pleasing and they stomp around carrying different weapons (which you can then pick up and use for yourself) but theyâ€™re all defeated in exactly the same way – by shooting the energy tank on their back. At least the boss battles fare better, with one in particular being pleasingly outlandish.

Of all the shooters weâ€™ve played, the one that Fuse recalls the most may surprise you – EAâ€™s own Mass Effect 3. Surprising, of course, because Mass Effect is primarily thought of as an RPG. Visually it has a very similar appearance, while the design of enemies bears some similarities to Cerberus’s drones including soldiers armed with space-age riot shields. It’s almost as if Insomniac were told to mimic its sci-fi style.

While weâ€™re on the subject of comparisons, weâ€™re pleased to report that Fuse doesnâ€™t feel as soulless as some of EAâ€™s recent shooters. The tedious Medal of Honor: Warfighter and Army of Two: The Devilâ€™s Cartel spring to mind here. Thereâ€™s some witty dialogue and the enemies are slightly smarter than the usual brainless soldiers. Well, theyâ€™re certainly smart enough to leap out of the way of a grenadeâ€™s blast. We also approve of two jungle-based missions that add a change of scenery, albeit only temporarily.

But for all its flashy looks and decent one liners, Fuse is undeniably a game that has a focus on style rather than substance. The videogame equivalent of a CGI-filled movie with a paper-thin plot, if you will. Battles soon start to become predictable, especially towards the end where the final couple of missions simply see you going from one elongated shootout to the next.

Only those looking to max out every character for competitionâ€™s sake will want to invest time in the moderately engaging wave-based co-op Echelon mode. If Fuseâ€™s servers arenâ€™t ghost towns in six months’ time we would be very surprised.

Perhaps Insomniac should have persuaded EA to allow them to add a few colourful dragons and wise-cracking robots after all.